By Caitlin Nichole 8 years ago2 Comments 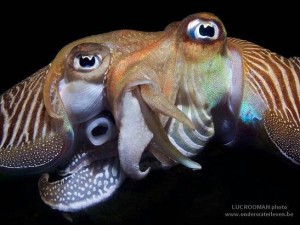 It started the moment she went into the tank – he spotted her, sped over and started to have his way with her. She had no choice! I could see she had enough, even underwater “No Means No”. This went on for weeks, he’d ambush her. She started exploding eggs. Eggs everywhere. None of them ever came to fruition. I saw her grow weak and weary, but figured “ah, this is the life of a female cuttlefish, she’ll be fine”. But then I noticed secretions coming from her mantle. Open wounds caused by the blunt force of the male’s mating routine. She became lethargic, she ate so unenthusiastically. I’m sorry this is all so incredibly sad. We separated her from her assailant but alas she succumbed to the incessant passing of sperm packets. I relayed this occurrence to my go-to Cuttle Specialist, Laura, when she simply responded “Yea, they do that sometimes”. Male cuttlefish suck.