Steinhart’s baby pygmy seahorses are growing up so fast 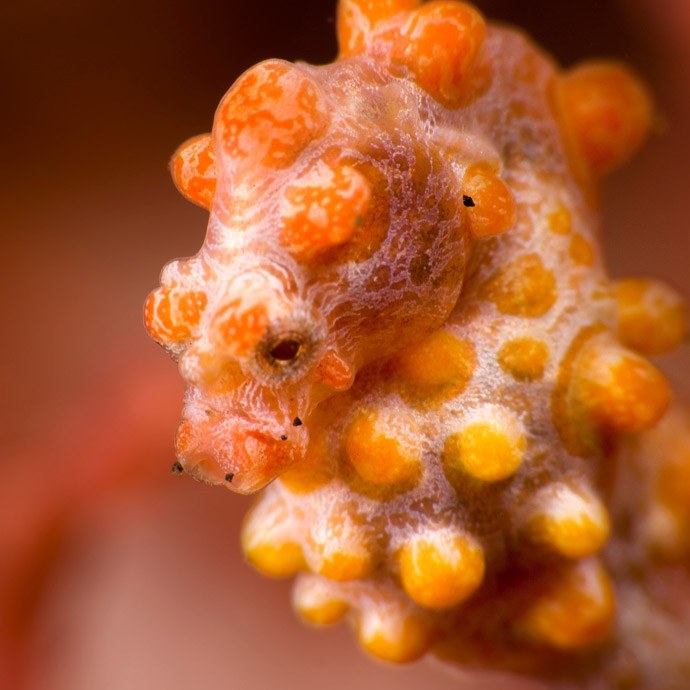 The pair of pygmy seahorses got busy making miniature-r versions of themselves!

For the next three weeks, newborn Bargibants spent their days hovering in a special kreisel aquarium. However, unlike adult Bargibants who spend their lives anchored (and perfectly camouflaged; see photo above) to Murciella paraplectana gorgonians, the babies seemed to rebel by refusing to latch themselves onto the gorgonian placed in their kreisel.  The gorgonian actually became so much of an obstacle in the kreisel that Steinhart biologists decided to remove it for concern that their baby pygmy seahorses would hurt themselves running into this barrier.

This preference for drifting in the open ocean immediately after birth may seem counter-intuitive to the survival of bite-sized babies.  Yet, this pelagic stage is not unlike those of most reef animal larvae, which helps with dispersal and overall survivability of a species.

Sooner or later, we all have to grow up and settle down.

This week (20-25 days after birth), the babies have finally decided to settle on Muricella sp. After the first three weeks of drifting in the direction of light, the baby bargibanti started to swim downwards.  It was at this time the Steinhart staff decided to darken the kreisel and reintroduce the gorgonian, and this time the pygmy seahorses took to their new home.

More remarkably, within 24 hours after settling, the once drab brownish-gray babies started to change their pigmentation to match the brilliant pink/orange gorgonian, including taking on the trademark knobby (tubercule) appearance of adult bargibanti!  We are promised pictures soon; you’ll just have to take our words on it for now.

For anyone picturing Matt Wandell with a tiny pipette trying to target feed itty-bitty baby pygmy seahorses, we’re sorry to disappoint you.  Neither the adult nor baby seahorses are target fed.  Instead, the biologists simply add a mixture of baby brine shrimps and AlgaGen copepods directly to the aquariums and let their tiny residents dine at their own leisure, and it’s obviously working well. When gorgonians are in the system, Steinhart staff also adds Reef Nutrition OysterFeast, RotiFeast, PhytoFeast, and Shellfish Diet to the systems.

As fragile as pygmy seahorses may appear, our source actually says their larvae are quite hardy as far as seahorses go.  But the chance of these pygmies making their way into the aquarium trade is a long shot for now.  Read Matt Pedersen’s explanation as to why.

Steinhart Aquarium collected these adult pygmy seahorses during their second Philippine scientific expedition (May 2014).  In fact, it was Matt Wandell who surfaced with the breeding pair.  Two month later, Matt is tending to over a dozen captive-spawned pygmy seahorses who are growing up healthy … and teaching their caretakers a lot about their species.