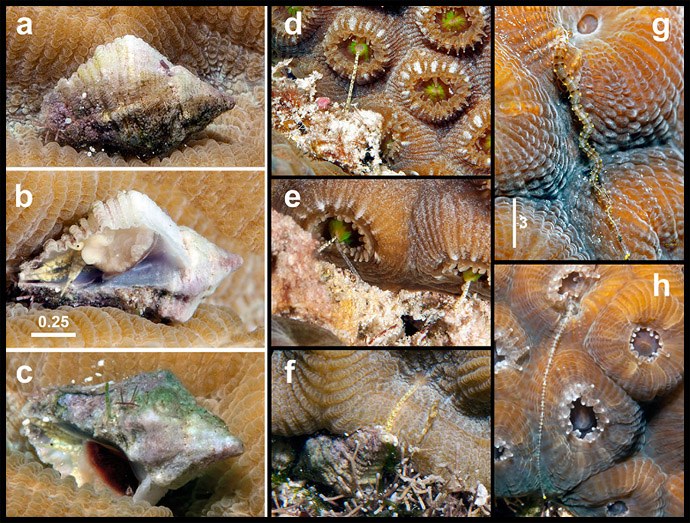 
Coralliophila spp. is a genus of gastropods that have devised all sorts of fanciful ways to extract nutrition out of corals.  Some species are voracious coral predators, ravenously consuming large swaths of soft and stony corals to fill their stomachs.  Some are more parasitic than predatory; For example, Coralliophila violacea (found in the Red Sea, Indian Ocean, and Indo-Pacific) tap into the skins of SPS corals such as Porites and slowly “sip” nutrients from the host coral.  Other Coralliophila snails like C. clathrata are symbionts of “button polyp” corals. These snails feed on nematocysts and zooxanthellae sloughed off Palythoa mucus; Talk about spicy food!

Excuse me! I think you’ve got something IN your face …

Then there’s Coralliophila caribbea.  As seen in photos d and f (above), this snail inserts its proboscis (feeding apparatus) into the mouths of Montastrea cavernosa brain corals to feed on the coral from inside out!  Scientists studying this snail found zooxanthellae in this snails’ digestive systems suggesting these snails weren’t stealing food from corals (a type of parasitism known as kleptoparasitism) but actually sucking out the coral’s innards.

There are other animals known to attack corals through their mouths.  Proceraea worms, (seen in photos g and h) also eat corals by entering their oral openings.   “Unpleasant” seems like an inadequate word to describe this unique type of parasitism.

This observation was published in the scientific journal, Coral Reefs.

Vote For The Ten Best Aquarium’s In North America