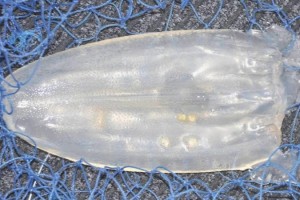 Normally no bigger than your fingernail, the Irukandji Jellyfish is infamous for being extremely venomous. The newly discovered Keensingia gigas, however, is peculiar in a number of ways – firstly in its extraordinary size (about an arm’s length) and secondly, it’s apparent lack of tentacles. While Keensingia was actually first observed and photographed in 1980, the first specimen was not captured until 2013 by John Keesing, from where the jellyfish gets its namesake. Lisa-ann Gershwin, the director of Marine Stinger Advisory Services, identified this particular Irukandji as a new species and is perplexed by it’s lack of tentacles. “Jellyfish always have tentacles … that’s how they catch their food,” she said. “The tentacles are where they concentrate their stinging cells”. Must be some hungry jellyfish – or maybe there’s a simple explanation. “I think more probably it does have tentacles but by random chance the specimens that we photographed and obtained don’t have them any more”. Sounds to me like these not-so-little guys have a decent sense of humor, “Silly humans can’t figure out what we do with our tentacles, mwahaha!”.

Sex On The Reef Under A Full Moon

We’ve Waited All Year For This – Start Off Shark Week the Right Way!