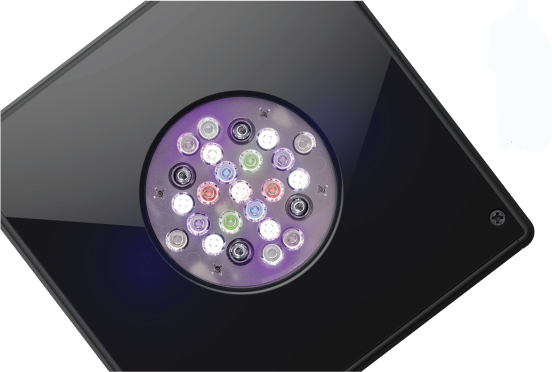 Did you know that EcoTech Marine has a light designed specifically for freshwater applications? Neither did we. Amidst all of the fanfare of the XR15w Pro launch, EcoTech quietly slipped their XR15FW light into the mix, kicking off what might be a very lucrative venture into the freshwater side of the aquarium hobby. Since we don’t dabble in freshwater tanks, we can only speculate, but seeing as how revolution the EcoTech Marine produce line has been for salty tanks, we’re positive that the freshwater community will accept them with wide open arms. Getting back to the fixture itself, the radion XR15FW uses the same form factor as the pro model, but comes with fewer LEDs and a much different array of LED colors. Where the pro model uses 21 diodes that emphasize blues and cool whites, the freshwater version only uses 15 LEDs and relies heavily on warmer colors. Here is a breakdown of each of the color channels: • Neutral White: 5 • Deep Blue: 2 • Blue: 2 • Green: 2 • Hyper Red: 2 • Indigo: 1 • UV: 1 The XR15FW will feature the same wireless technology and TIR lenses found on the pro model, meaning it will work flawlessly with the EcoSmart Live platform and the ReefLink wireless hub. As for the fixture’s price, the XR15FW will retail for $299, or about $150 less than the pro version. The light is currently available for preorder, but hasn’t quite hit the market as of yet MORE: EcoTech Marine Looking to Conquer the Freshwater World with the XR15FW LED Fixture

Boat Noise a Culprit for Decline of Sea Hare