Fish With Human-Like Teeth In Arizona?! 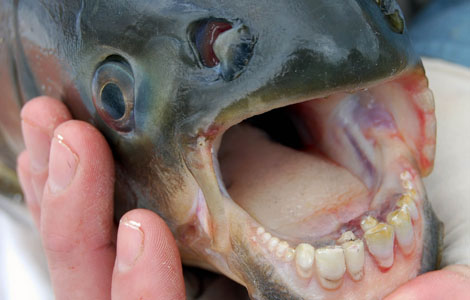 The Lakes in Arizona are not known for their exotic fish. But that doesn’t stop the fish from eventually ending up there. Pacu are popular aquarium fish, known as ‘vegetarian piranhas’. While sold in the fish store at 2-3 inches, these fish can get up to 30 inches long very fast. Fish owners who are no longer interested in caring for their exotic fish, or whose fish may have outgrown their tank, end up dumping the fish in the lakes. A 3.5 lb Pacu, a South-American cousin of the Piranha, was caught by a fisherman, oddly enough using a piece of hot dog as bait. Luckily these non-native fish do not have much effect on the environment, are not invasive. The Lionfish in Florida is a good example of the problems an invasive species can cause. Exotic fish and pet owners should consider the ramifications of releasing their pets into the wild. There are even groups like the Exotic Pet Amnesty Program that will take unwanted animals from owners. Luckily, in the case, other than a few shocked fisherman, this species will not cause harm to Arizona. MORE

The fluorescence of “Istedgade Reef”