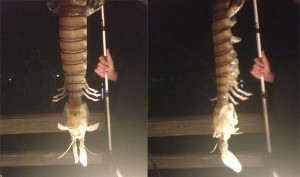 This is beyond terrifying. Just knowing what kind of blow the little three-inchers are able to deliver, I wouldn’t want to get into a fist fight with this guy, EVER. Just look the mantis shrimp next to that dude’s hand, he’s huge! The fisherman, Steve Bargeron, struggled to reel in the massive sea monster while out on his daily fishing trip. Hmmm, I wonder what they taste like? Lobster or shrimp, I’d imagine. Clearly there’s a decent amount of meat there. Just for good measure, I’m going to throw in one of my favorite Ze Frank clips with True Facts About the Mantis Shrimp,  “a living fossil of the prehistoric clown”, “sexnocular dirty science”. God, I love that man.

True Facts About The Mantis Shrimp