Is the “Floppy Floppy Spider of the Sea” Too Smart For Consumption? 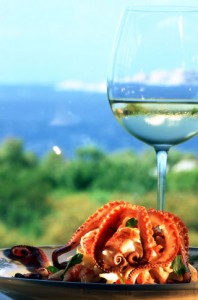 Hold on there, Cowboy, put down your fork/chopsticks/fingers (I know you eat with your fingers, you animal) and let’s really mull over the cephalopod we’re about to consume. Sure, it’s pretty damn delicious. Tender, mild and delicious fried – just don’t over cook it, it’s literally like eating rubber bands. Let me put some crudite out for you, because I know you’re starving and just want to eat your eight-limbed meal (and you might as well, it’s already deceased and cooked at this point), but before you do, seriously, let’s get right into it. Octopus are phenomenally intelligent beings. Their large cranial mantles house some impressive grey matter, AND they boast three hearts (awww) and a decentralized nervous system, hence their nifty motor dexterity. But why is this even an issue? There are numerous animals we consume regularly that are far more closely related to ourselves than the octopus – cows, pigs, what have you – so why even question the indulgence? Well, it all comes down to the level of intelligence of the genus. Could there be something of a moral dilemma here? Chefs have been preparing and serving cephs for years, much to the public’s delight. Yet, when they’re made aware of the creature’s cognitive capabilities, there seems to be s hint of hesitation at the very least. The New Yorker went ahead and interviewed the culinary masters of restaurants based in Los Angeles and New York, inquiring about their misgivings of the Octo-Dish. The responses are pretty diverse. Go on ahead a take a look at the interviews for an in-depth recap on the topic.