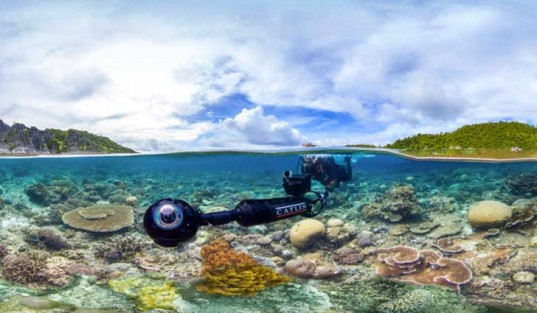 The Catlin Seaview Survey, the project which is out to capture and record the health of our World’s Reefs, is at it again. The goal of the project is to create a scientific baseline of the reefs, which can be used to monitor the changes in the World’s reefs over time.  The Catlin Seaview Survey have just finished capturing and mapping the Coral Triangle, a triangular area comprising of the Indian and Pacific Oceans of the Philippines, Indonesia and Malaysia. Over 3000 different species of fish reside in these waters, along with over 75 percent of all coral species, making it a diverse and flourishing marine ecosystem. The mission uses state of the art digital SLR cameras, which catch 360 degree images of the area.The photos will be available for viewing on the company’s database website, The Global Reef Record.MORE