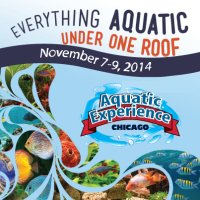 It’s that time of year again…Aquatic Experience in Chicago. The show began yesterday and goes on until tomorrow, November 9, 2014.The motto is ‘Everything Aquatic Under One Roof’ and that pretty much sums it up. There’s so much going on in here. I had the honor of speaking at this years conference yesterday, about my time in the Middle East, “Mega Aquariums In The Middle East’. It was great to reminisce about those crazy years and I was honored to share my experiences building amazing aquariums in the desert. There are a ton of awesome speakers this year, like Jake Adams, Sanjay Joshi, Charles Delbeek, and Steve Lundblad, and that’s just to name a few. This year is really shaping up to be a great show. The show goes on until Tomorrow, so if you are near by, it’s definitely worth a visit. Time to get back to the show-photos and follow up articles to come. MORE