Broadclub Cuttlefish Comes To Monterey Bay Aquarium, Their Biggest Yet! 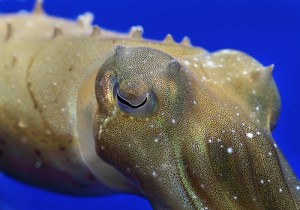 Exciting news comes to us today from the Monterey Bay Aquarium in the form of a Cephalopod! The broad club cuttlefish (Sepia latimatus) is a porky little fella’, roughly the size of a football with an attitude to match. Latimatus is one of the largest cuttlefish species, second only to the Giant Australian Cuttlefish (Sepia apama). And he’s now a welcomed guest in Monteray’s Tentacle display!

Featuring all the standard equipment – 8 arms and two feeding tentacles, this Machiavellian predator distracts its prey with pretty, mesmerizing colored bands, flashing across its skin. The hypnotized victim is then caught off guard, grabbed with the two clubbed feeding tentacles and dies a gruesome death. Like other cuttles, the broadclub maneuvers via its undulating “skirt”, accelerating by expelling bursts of water through a syphon. Also like other cuttlefish, these guys have a pretty kinky sex life, engaging in aggressive face-to-face mating where the male passes his sperm packets into the female’s mantle. For more information about this beautiful cephalopod, check out Monterey Bay’s guide to Sepia Latimatus here. If you’re fortunate enough to be in the area, be sure to check him out at their Tentacles display, I’ll definitely be making every effort to do just that!