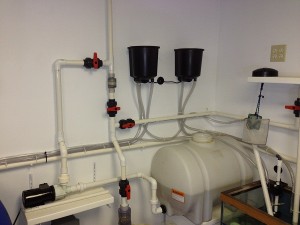 If there is a dead horse that’s been beaten, picked at by vultures and left to decompose in the hot savanna sun, it’s the topic of water changes. Now that the maggots, coyotes and other scavengers have had their way with it, I’ve decided to take another swing, cracking hard into the exposed skeleton of this long debated topic. Water changes represent the very basic level of marine or reef aquarium care, and in reality are the most archaic and simple way of removing unwanted nutrients, and balancing crucial water chemistry parameters. Take dirty water out, and replace it with pure water, what could be easier. Today, there are numerous gadgets that filter our aquarium water, and the rise of bio-pellets and zeolite even gives nitrate a run for its money. So is there really any reason for aquarists to be hauling buckets, making water and dealing with salt mix on a regular basis? 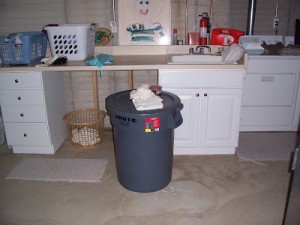 I came to the marine aquarium hobby after keeping freshwater fish for many years. For a long time I bred the popular Discus fish, a South American cichlid that is known to thrive in very pristine, low ph water. It wasn’t uncommon, when trying to get Discus to make babies, for aquarists to do an 80% or even 100% water change daily. Needless to say, when I arrived at marine aquaria’s doorstep, I was well versed in regular partial water changes. Back then, regular water changes were part of general aquarium maintenance. Some reef aquarists were doing them three times per week, even completing small 5% water changes daily. It was before RODI units became popular, and typically we used warm tap water treated with a de-chlorinator.

Back in those days, I did two 35% water changes per week, turning over 70% of my tank water weekly. When I stepped into reef keeping, I adopted the daily 5% water change schedule. Oddly enough, my tank was full of hair algae, brown algae and diatoms. Reality was, it didn’t matter if I changed 100% of my tank water daily, my source water at the time had traces of phosphate and nitrate, and I had no RODI unit to remove it. Since the weapon of choice those days was wet-dry filtration, high levels of nitrate were common, and often we didn’t worry about it unless nitrates exceeded 50 ppm. 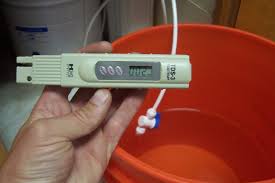 On the reef side of things, there was no “reef specific salt” so changing water was a tireless exercise in testing, additives, more testing, and a bit of luck.

So why this walk down memory lane? Well, a lot can be learned from the past. One lesson is that it doesn’t matter how often, or how much water you change. If you aren’t replacing it with high quality water, full of the trace elements needed to keep marine life healthy, then it’s a mute point. Like I said, even with daily 5% water changes, I was battling all the nasty stuff reefers hate.

RODI units today are highly effective in creating truly pure source water. They have also immensely dropped in price over the past 15-20 years. When I entered the hobby, a basic RODI unit would easily set you back $ 500.00 or more. Today, a top notch system costs about half that amount. Having pure fresh source water isn’t only the key to properly setting up a reef, it’s the key to its long term survival as well. 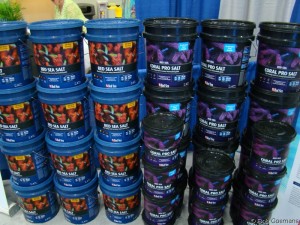 Many salt mixes today are reef ready the minute the salt dissolves within the water. They are phosphate and nitrate free, and leave behind little residue, if any. Creating high quality marine water is easy, and testing that water for fundamental elements is a breeze, compared to yesteryear, thanks to the rise of digital testers. Today, a water change is more effective than it ever has been. Drop for drop, you are getting your time and money’s worth when performing a water change.

Okay, how much how often?

The first question should be, do I need to do them? Methodologies such as the Triton Method are stepping away from water changes altogether. They focus on balancing trace elements, rather than changing water. In fact, the Triton Method points out many inadequacies about water changes, referring to them as environmental changes that work as the antithesis of stability. While I agree with the theory presented by many who lead the charge to kill the water change, I am not ready to quit hauling buckets just yet. That said, if you’ve adopted the Triton Method and are satisfied, feel free to stop reading now. 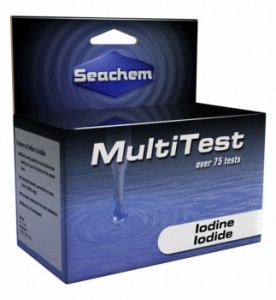 Like I said, water changes today are more effective than ever. While they are a simple maintenance method, they also are highly effective. Physically removing nutrient laden water and replacing it with fresh dilutes build-up. Since salt mixes today are so effective at creating a suitable environment for marine life, often you are replacing every trace element needed with one water change. Salt mixes are easier then ever to use, and refractometers can guarantee a salinity that matches that of your tank.

There is a valid argument about only doing water changes when nitrates are detectable, or rise above a certain point. The problem with this, is that it underscores the purpose of water changes. A water change is a moment of taking hands on initiative to maintain your tank. It gives you a chance to inspect your equipment, take a close look at your livestock, and diagnose any hidden problems. Also, water changes can act as a buffer in the event something goes wrong, say something along the lines of old tank syndrome. If phosphates are suddenly rising, and you have consistently been removing them, it could be the difference between life and death for your tank. 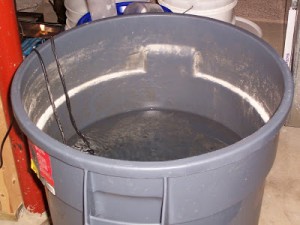 I am a fan of the weekly 25% water change. It’s easy math, and if you’re creating high quality replacement water, it’s just enough to have the intended effect, without breaking your back. Pick a day that you can sacrifice some time, and designate it as your water change day.

Rubbermade Brute trash cans are the old standby for storing water. Rubbermade makes a nice snap on dolly for the Brute, which is a lifesaver if you’ll be moving large amounts of water from tank to tank.

Keeping enough water on-hand at all times for one water change is recommended. There are times when things get out of whack, or something unexpected happens and a water change is the best tool to correct it.

Always use the same salt mix. There is a debate on how important this is, but I’ve personally found that it’s best to pick a salt mix, and stick with it. Mixing salt brands, especially together on one water change seems like it could have a negative effect on balanced water chemistry.

24 hours after your water change, conduct a water test of all three crucial parameters, (Calcium, Alkalinity and Magnesium). Adjust them as needed using buffers.

Closely monitor your tank’s adsorption of Ca, Alk and Mg. Sometimes, if you are using a reef specific salt, if your tank isn’t using these elements as quickly as you’re replacing them, then you will end up with too much of one element. If you find this is happening, switch to a non-reef specific salt, such as general Instant Ocean, until your parameters balance out.

While not water change related, a salinity probe can be your best friend. Watch the salinity probe closely when topping off with freshwater water. This will show you how much of a change in salinity you experience due to evaporation, and let you know exactly how much freshwater to add.

As always, if you have a question regarding water changes or general tank maintenance, email me at jjeremy@gmail.com.