Scary smell may help save corals 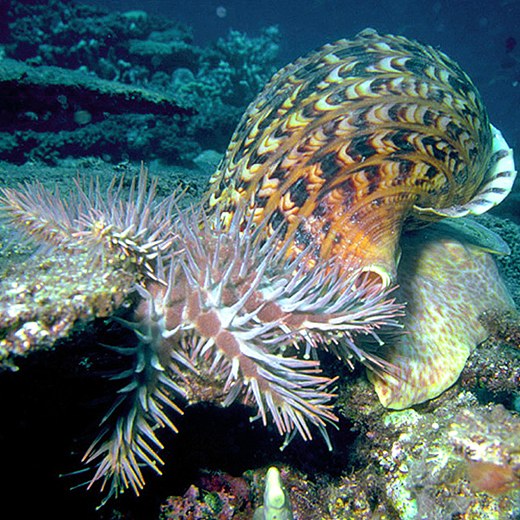 Photograph of a giant triton eating a crown-of-thorns starfish by K Goodbun, AIMS.

Scientists at USC and the Australian Institute of Marine Science (AIMS) have found that the scent of a rare giant sea snail terrifies the crown-of-thorns starfish.

One of the world’s largest marine snails, the giant triton is one of the few natural predators of the crown-of-thorns starfish. While the snail has been protected in Australia since the 1960s, it is rare on the Great Barrier Reef.

Dr Cummins, an expert in marine animal chemical communication, said the confirmation that the crown-of-thorns starfish was terrified by the scent of the giant triton could be a breakthrough in the management of the pest.

“Giant tritons only eat about one crown-of-thorns starfish per week, so breeding enough of them to control big populations is not really feasible,” said Dr Cummins. “But we now know the giant tritons release this scent that makes the starfish scurry away.

“Our team at USC includes leading scientists who are molecular biologists and specialists in proteomics and metabolomics who can identify exactly what the scent molecule is,” he said.

“We hope to chemically synthesise the molecule, then use slow release baits to dispense the scent compound to control the movements of the starfish.

“It won’t kill the starfish but if we can disperse aggregations, particularly during spawning season where they need to be near each other to breed, that might significantly reduce numbers.

“We could also scare them away from particular parts of the reef, and even make them move to areas that are more accessible for divers to poison and remove them in the traditional way.

Principal Research Scientist at AIMS, Dr Mike Hall, said the decline of the giant triton, prized for its beautiful shell, might have partially contributed to the population explosion in crown-of-thorns starfish, responsible for 40 percent of coral cover loss on the Reef in the past 30 years.

“For many decades the control measures against the crown-of-thorns starfish involved manual lethal injection,” said Dr Hall. “The objective of our project is to develop novel control techniques by identifying their natural vulnerabilities.”

Dr Scott Cummins is an Australian Research Council Future Fellow in Molecular and Cellular Biology at the GeneCology Research Centre at USC.

Video of a crown-of-thorns starfish reacting to giant triton scent – filmed at AIMS.

A sea change in the corporate policy of large pet chains

ORA Hector’s Goby is the Latest Conquest of Captive Breeding