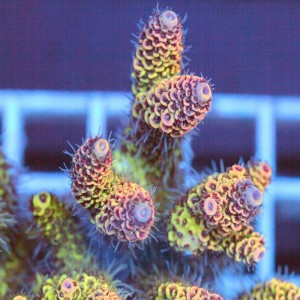 Brett Harris, the “SPS Guru” of Cherry Corals, informed me last week that he was going to be releasing a new Acropora morph he had been cooking for a while during their recent Live Sale. It’s not overly often I get excited about a fuzzy stick, but this one has definitely piqued my interest. This acro has yellow undertones with bright pink and orange highlights exposed on the coralites. Polyps appear very fuzzy and “milli-esque” once the coral settles in. 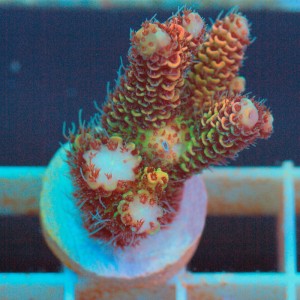 While these days it seems many vendors of “SPS” are solely out to hoard new imports and price gouge hobbyists by selling tiny stick frags for $400+, Cherry Corals released a few of these at a fair price range of $100-150 each. Fantastic! I don’t keep any fuzzy sticks at this point, but this one may has me chomping at the bit… 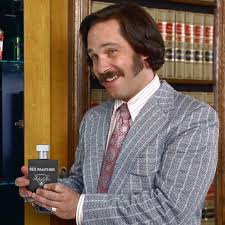 Who wouldn’t want to be as cool as Brian Fantana?

Reefs In Art: Glass Cephalopods. Grab a Straw and Drink This One In