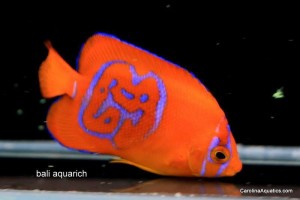 Ok, this little six centimeter stunner isn’t actually called a “Rorschach” Clarion (I made that up), but you have to admit his aberrant pattern is reminiscent of the good ol’ fashioned psychological inkblot test. I see two seahorses kissing, or perhaps human embryos? Now we do occasionally see an aberrant Holacanthus clarionensis, usually from Bali, but this is one of the coolest ones we’ve seen in a while.

Bali Aquarich is currently in possession of the teensy, vividly orange and blue fish where they’ll be bulking him up for the next two to three weeks before carefully packing him up and sending him to Carolina Aquatics for wholesale. There he can join another (slightly larger – 10cm) Clarion with a pretty wild pattern. Oh, and the 40 intergenus hybrid Citron Clownfish we mentioned earlier this week. Carolina Aquatics sure is seeing a lot of orange lately. 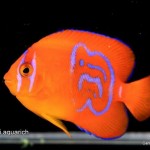 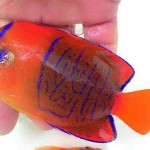 Sharks In The Water At New Detroit Aquarium