The Most Tragically Unlucky Sex Lives of the Deep 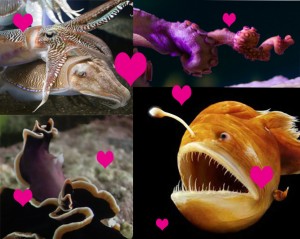 Being that it’s the eve of the oh-so-wonderful holiday filled with gushy romance and flowers and chocolate that is Valentine’s Day, and this eve is falling on the most unluckiest of days (according to western superstition) that is Friday the 13th, why not relish in the sublime crossing of dates and go over some of the rather unfortunate, bizarre, violent and kinktastic mating habits of the deep? Feeling bummed about not having someone to spend this sappy Saturday with? Read through a few of these and I guarantee you’ll feel a little bit better about your love life (or lack there of) because after all, never will you be a hermaphroditic seaslug forced to fence with your penis to see who gets to stab and inseminate who. 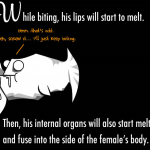 Ahh, the poor, sad soul that is the male anglerfish. This little guy unfortunately spends his entire life in search of the girl of his dreams. What happens when he sniffs her out? He bites on and never lets go. Releasing and enzyme he begins to digest his own lips, fusing to her body at a vascular level, reducing himself to nothing more than a sperm factory for his lady, kinda like marriage. How’s your lonely Valentine’s day sounding now? Read more here. 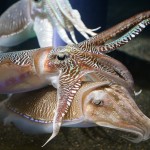 If you’re a female cuttlefish, expect to be subjected to constant harassment from your male counterpart. These cephalopods are known to have quite the insatiable sex drive, aggressively subjecting the females to the passing of sperm packets whether she wants to or not. This violent copulation takes its toll on the female and they can succumb to a most terrible fate – something I’ve witnessed, unfortunately, first hand. Hey, single ladies, your hot date with Netflix and glass of vino would never take advantage of you like that! 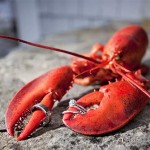 I’m going to file this one under “stuff I didn’t really need to know”. First of all, and this is pretty cool, female lobsters get naked before mating. Only partaking in sexy times after molting, the female then shacks up with the male while her shell hardens, about ten days to two weeks, then packs up her crustaceous belongings and leaves. Don’t feel too bad for the guy, there’s always another female waiting for her turn with the dominant male. How’s this fall into “need not know” territory? Well, in order to seduce the male, the female knocks on his door and pees in his face. That’s right, she shoots her pheromone-riddled urine into his abode, putting him into a submissive state.  Hot date stood you up? At least you know you won’t get peed on tonight. 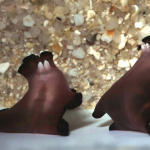 That’s exactly what that sounds like. These unsegmented, soft-bodied invertebrates are hermaphroditic, so all possess ovaries and testicles. So how does reproduction work? Two individuals engage in a fiery duel, often lasting up to an hour where they attempt to pierce the other with their dual-headed penis, victoriously inseminating them and resulting in fertilization within seconds. Since child-bearing is somewhat of a physical burden for the mother, the father is considered to be the victor here. But you need not worry, you probably won’t find yourself in a similar situation. Score! 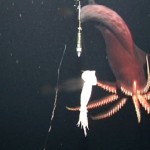 This massive bioluminescent species of squid, Taningia Danae, really like it rough. The male uses his beak and razor sharp claws to slash two-inch-deep wounds into the female, into which he uses his penis arm to inject her with spermatophores. I need not tell you why you should be happy this is not how you will be spending your day tomorrow. Not convinced? Consider Moroteuthis ingens, a species that once filled to the brim with sperm packets, the deposit burrows into her skin, dissolving her tissue. 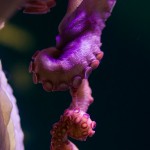 While death shorty after fornication between octopuses is not uncommon, a lesser seen behavior is pretty damn distressing for the male. The female has been known, on rare occasion, to strangle the male once she’s had her way with him. “In 2007, scientists observed one merciless female spend two days cannibalising a small male, having previously attacked and suffocated him after having mated with him 13 times.”

So, Happy Valentine’s Day and remember, it could be so, so much worse!