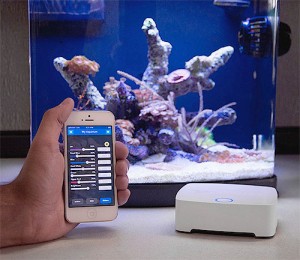 Even when broadband access began expanding, the thought of having a router that controlled something for your reef aquarium hadn’t entered the minds of most aquarists. Reefers were oohing and awing over wireless thermometers that placed a probe in your tank and allowed you to track temperature changes from another room. While communication technology hasn’t evolved solely for purposes related to reef aquariums, advances have opened up almost limitless possibilities for aquarists. Online monitoring equipment, controllers, webcams; all of it ushers in an exciting new era of reef keeping. LED lighting, with its ability to ramp up and down, creating a host of different profiles allows marine aquariums to be more beautiful than ever. When deciding on technology to implement for your reef aquarium, what options are the most useful and how much technical knowledge do you need?

All of my aquariums (one reef and two fish only) are very connected. Since I studied computer science for a while during college (with my first real job being a programming internship), and have always had a profound love of technology, having a high tech reef tank comes naturally for me. In adopting a variety of technology for my reef, I’ve had the chance to key in on a few things I’ve found immensely helpful.

Have your tanks near your modem and router: 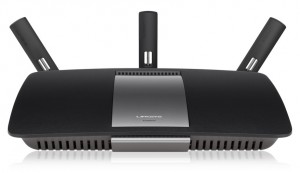 This is sometimes possible and sometimes not. If your tank is close enough to a router, than it’s possible to plug devices directly into the router. For most, the idea of mixing saltwater and electronics makes them queasy. LED lights are usually wireless capable, so they connect to an existing network, offering control from any computer on the network and often extending it to any internet connected device. Depending on where the tanks are, in relation to a router, a wireless signal may need boosted. This is easily accomplished in most cases with simple wireless extenders. Upgrading to an AC router can increase speed and range on compatible devices, although there isn’t any aquarium technology that I’m aware of that makes use of AC technology. Overall, having a reliable G/N router that provides good signal throughout the home will satisfy your aquarium needs.

If you find yourself in a situation where a device requires a hard-wire network connection, such as the Neptune Aquatics apex and you are simply way too far from a router to make it happen, look at home plug devices. This is technology sold by a variety of vendors, which uses your home’s copper wiring to transmit data. One home plug goes into a power outlet near the router, with a network cable attached directly and another goes into an outlet near the device you want connected. The use of copper wire to transmit signal creates a hard-line, no matter how far the connected device may be from the router. It does require that the aquarium be on the same wiring and breaker as the router.

While ipads, smart phones and laptops are all handy for accessing aquarium technology, I’ve found it helpful to have one computer dedicated for aquarium devices. It doesn’t have to be anything special, often a desktop that’s a few years old works fine. In this scenario, all aquarium related devices can be associated with that computer and using Log Me In software, you can log in and tech anything from abroad if need be.

The hardest to the easiest: 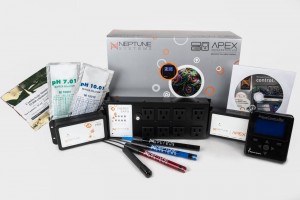 When working 100% Neptune System’s Apex AquaControllers are wonderful, but when they need updated or fail to function, it can be a real nightmare. Upgrading the firmware requires a hard line data connection and in my experience they lose connection often. Things have improved with Apex Fusion, which is a cloud based control program. If a firmware update fails, it’s not uncommon for the apex to cease all function entirely. If you are using an apex to control key aspect of your tank from abroad, it’s very helpful to have a computer connected to the apex with access using Log Me In. That way, if an update needs applied while you’re away, it should be possible to do so without problems, if the computer has a hard line data connection as opposed to a wireless one. 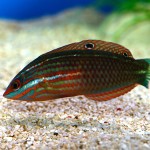 Apex controllers aren’t difficult to set up and program, if you are comfortable with technology and programming. If not, they can be a bit tricky. Like I said, once up and running they do their job quite well, but tech novices may need to spend some time researching online to unlock all the capabilities. A high end apex can monitor ph, temperature, ORP and salinity, while controlling numerous devices on customized schedules. neptune Systems is good about working with aquarium device manufactures and implementing control options for a variety of popular equipment. While they are common on advanced reefer’s tanks, those that lack tech experience sometimes are overwhelmed by the complexity of these systems. 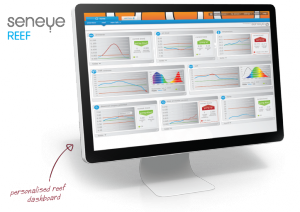 Next on the list is the Seneye reef monitor with internet server. When Seneye first debuted, it required a constant connection to PC (no MAC software) running Seneye software to function. Since Seneye offers a nice set of data (temperature, ph, NH3 and NH4, PAR, dissolved O2) many reef keepers were anxious to get their hands on them. Seneye realized the flaw in requiring a PC for operation and released the web server. The Seneye is easy enough to set up in its own right, but the webserver may give tech novices a fit. The web server requires a hard connection to a router and a hard connection to the USB input on the Seneye. To get constant light readings, this means your Seneye has to be mounted somewhere within the tank that receives light, close enough for a network cable to reach.

Seneye does offer a wireless internet server, which is actually the web server with a wireless connector that creates a hard Ethernet connection at a power outlet. In my experience the wireless adapter was horribly unreliable, losing signal often and requiring a factory reset and new-configuration to get back online. Using the home plug is a major improvement, giving the Seneye web server the required hard connection without the finicky nature of wireless adapters. Then Seneye’s mobile software can be used to monitor a wide range of aquarium parameters and notify you if something changes drastically. 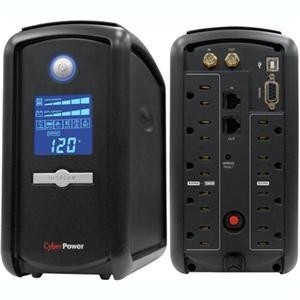 APC and Cyber Power make a series of battery back-ups that offer users some enhanced options. To maximize the possibilities, it’s important that your modem and router are plugged into the battery back-up. These devices can then notify you via email if the power goes out and let you see how much time is remaining on battery power. I have my battery back-ups powering the tank’s skimmers, circulation pumps, main pumps and heaters. If the power goes out, the modem and router are backed up, so I can see that the back-up is running with an estimated time the tank has until battery power runs out. 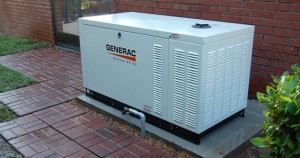 The next step in back-up power is a generator. These can range from units that need to be manually activated during a power outage, to units that simply come on automatically. This is an expense, as it requires an electrician to set-up and the generators themselves are expensive. Hopefully soon, generators will arrive that can be synced with a wireless network which is battery backed-up, so if a power outage occurs, users can log on to switch from grid power to generator power. While there are systems which can be installed to automatically activate when the power goes out, I am not aware of a user installable unit that can be accessed wirelessly.

The Ecotech reef link operates with Ecotech’s Mac like simplicity. It’s easy to set-up and does most of the work itself. The problem is the device does go offline for no apparent reason. The only way I’ve found to fix this is simply by unplugging the unit and plugging it back in. If you are miles and miles away and need to adjust a vortech flow pattern or lighting profile you won’t be able to simply reboot your reef link by unplugging it. For that reason I recommend using a wirelessly controlled power adapter. These are fairly inexpensive to buy, and allow your to turn power on or off to a device using your phone, ipad or computer. If you try to log in to Ecosmart Live remotely, only to find the reef link isn’t sharing your hardware, simply turn power to the reef link off and then back on. Most smart home systems come with several controllable power outlets and stand-alone units can be found online. 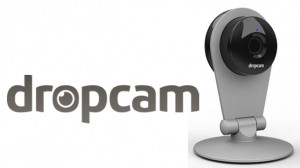 Perhaps the easiest reef gadget to set up isn’t even intended solely for reef aquariums. This is the Dropcam. Dropcams practically set themselves up and can be programed to do a lot of stuff, including motion detection and emailing the user when they go offline. I rarely have my dropcams disconnect and when I do, it’s normally the fault of broadband going down or a power outage.

If you travel a lot and your broadband connection goes down often, consider using a hotspot to back your connection up. These are available in a variety of configurations and rely on a 4G LTE network for broadband. Since 4G networks hardly ever go down, these can offer control in the event your main internet connection is out. Of course they do carry the expense of a monthly service charge.

Using all of these devices combined gives aquarists an incredible amount of control over their tanks from afar. For example, if I am away and need to top off my tank, rather than take risks with an auto top off, I simply check a dropcam mounted in the aquarium’s cabinet that views the sump. I can inspect the water level and if it’s low, use the apex to turn on the top off pump, watching on the camera until the water level is acceptable and switching the pump off.

Giving you precise control over your aquarium from afar isn’t cheap. Each of the devices I mentioned range in price for $ 99 on up to well over $ 800.00. An automatic back-up generator can cost thousands of dollars by the time it’s properly installed and configured. If I could only have one piece of aquarium control tech, it would most certainly be the Neptune apex. While it’s not the easiest to use device of the bunch, it most certainly offers the most precise mix of control/monitoring. The next on the list would be dropcams. Nest Labs has done a great job at making a very reliable, easy to use camera that isn’t tremendously ex

What type of betta do you have?