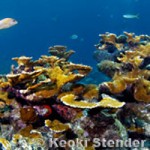 This past Thursday, March 5, 2015, the National Oceanic and Atmospheric Administration (NOAA) published a comprehensive recovery plan for threatened acropora species A. palmata (Elkhorn coral) and A. cervicornis (Staghorn coral). Prepared by the Acropora Recovery Team (ART) for the National Marine Fisheries Services (NMFS), the plan is comprised of two dozen actions deemed necessary for the revival of both species which have been listed as threatened since May 9, 2006.

Once thriving reef builders of the Caribbean, Elkhorn and Staghorn coral have suffered a 92-97 percent decline since the 1970’s, falling victim to a multitude of detrimental factors such as the flesh-eating white band and white pox diseases, ocean acidification, warming and pollution. After the initial listing in 2006, the NMFS aggregated the Acropora Recovery Team with the intention of  establishing a strategy for continuous rehabilitation of the wild population of both species. The team of 19 researchers and government officials identified criteria, categorized as “population based” and “threat based”, that would warrant a removal of the “threatened” title under the Endangered Species Act.

The plan doesn’t propose any actual regulations but instead serves as what they hope to be a “roadmap” of sorts for species recovery, according to NOAA officials in a press release. And just how long is this road? The ART estimated a recovery timeline for the scleractinian species of approximately 400 years based on the actions identified in the plan.

Wait, what?! does this mean a grueling 400 years before we can hope to see Elkhorn and Staghorn  off the list? In short – no, that’s not what it means.

“While meeting all of the recovery criteria would indicate that the species should be delisted, it is possible that delisting could occur without meeting all of the recovery criteria if the best available information indicated that the species no longer met the definition of endangered or threatened. In the case of elkhorn and staghorn corals, it is possible that because of the interaction between the threats and the species’ population responses, fully achieving all of the Threat-based Recovery Criteria may not be necessary to achieving restored, sustainable populations if the benefits to the species from successfully addressing one threat (e.g., nutrient enrichment) make them more highly resilient to another threat (e.g., disease).” *

“I think it’s important to understand what the 400 year horizon means versus what delisting means”, says fishery and sustainability-centric writer and data-fiend, Ret Talbot, “400 years is the estimate for achieving all the recovery criteria listed in the plan and is based on the significant mitigative actions needed to achieve those criteria (e.g., dealing with ocean acidification, global climate change). Delisting would occur if the species no longer meets the definition of threatened or endangered even if all the recovery criteria were not met.”

The NOAA also aspires to benefit not only A. palmata and A. cervicornus populations, but coral reef ecosystems as a whole with this criteria. “There are many actions we can take at the local level to improve the ability of corals to cope with global threats. We can use lessons learned from this plan for recovery of the additional coral species recently listed as threatened under the Endangered Species Act.”, states Eileen Sobeck, Assistant Administrator for NOAA Fisheries.

For further information, you can read the recovery plan in full on NOAA Fisheries website here.