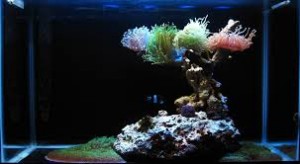 Bare bottom tanks have never been uncommon in fish stores. Often, it’s much easier for someone selling marine fish to maintain a bare bottom tank, simply because decorations can easily be pulled out if someone buys a fish. These systems are normally based off multiple holding tanks which are filtered by a central sump which is full of live rock and sand. This refuge was a place for aerobic and anaerobic bacteria to flourish, creating the backbone of biological filtration. Bare bottom tanks weren’t common in private aquariums and I still wouldn’t refer to them as common. They are growing in popularity though and embracing a bare bottom tank is still a new trend for reef aquarists. Aesthetics aside, is running a bare bottom tank of any benefit? Those who have given up on substrate claim it prevents old tank syndrome and reduces the risk to coral health posed by sedimentation. Are any of these claims true?

Substrate’s role in the aquarium:

It could be argued that substrate is entirely aesthetic, based on the personal preference of each aquarist. That wouldn’t be entirely accurate. Live rock in many ways is a form of substrate. It’s a key puzzle piece to creating an interface for biological filtration and can jump start tank cycling. Some aquarists claim an aquarium can be instantly cycled by cramming it full of cycled live rock. In my experience this practice reduces the intensity and duration of the cycle, but doesn’t prevent it altogether.

Sand plays a similar role, geared more toward the anaerobic bacteria that breaks down nitrate. Since anaerobic bacteria prefers oxygen depleted environments, the nooks and crannies of the sand bed serve it well. Sand also plays a critical role for various fish, such as jawfish and invertebrates like sand sifting sea stars. For a long time deep sand beds were considered a necessity in reef aquariums and more recently shallow sand beds became popular. There are still outlets that sell crushed coral substrate but I know of very few aquarists that use it. It’s without a doubt that substrate plays an important role in our aquariums. 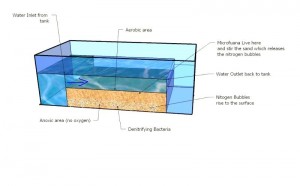 So why abandon sand altogether? While it serves as a home for anaerobic bacteria, it also serves as a debris trap. Uneaten food, fish waste, detritus – all become lodged in the sand bed. Here they decay and are hopefully broken down into harmless compounds by bacteria. The school of thought is that sand beds are so rich with bacteria, that trapping debris did little more than feed these microbes and allow them to flourish. 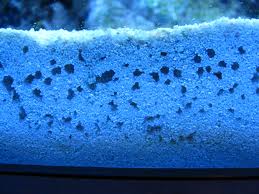 For some aquarists sand beds are a source of angst, as they often appear to give rise to cyanobacteria outbreaks, algae growth and discoloration. Any time you have bacteria working away, without oxygenation, there is a risk of loss of control which becomes apparent when something ugly starts growing. I’ve known reef aquarists who vacuum their sand bed, which totally works against the theory behind them altogether. This not only stirs up particles within the sand, but also pulls out some of the beneficial bacteria. Any compounds trapped within the sand bed are then set free to infect the entire tank. 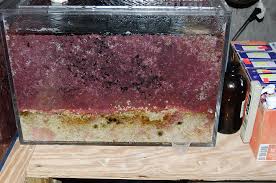 Other aquarists see the sand bed as a nest for external parasites, which fall to the sand and encyst before releasing multiple copies of themselves. Every aquarist has their view of a sand bed and its place in a modern reef.

Sedimentation is often the most powerful argument for a bare bottom tank. Most coral species, especially SPS corals, are sensitive to sediment. Sediment gathers on their tissue causing them to release mucus, which is then blown throughout the tank latching onto other corals with a snowball effect. In aquariums with deep or shallow sand beds, a slipping powerhead can spell disaster if it puts excessive current onto the sand, blowing it throughout the tank. The mentality is that if you remove the sand bed, you also remove the risk of sediments destroying your reef. 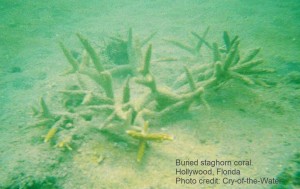 No sand bed, what about the helpful microbes?

For years sand beds served as a primary tool in denitrification, often the main line of defense against rising nitrates. Our display tank was full of sand, our refugium was full of sand, aquarists had the stuff piled up anywhere they could get it. It’s important to realize this was before the day of bio-plastics, zeolite and a host of other methodologies aimed at denitrification. Sand was the best option if you wanted a reef with reduced nutrients.

Today our understanding of the ammonia cycle has created a host of methods for removing nutrients from the tank. Soluble carbon dosing (aka vodka dosing) adds a liquid carbon source which encourages a bloom of anaerobic bacteria. Bioplastics provide a long term food source for anaerobic bacteria which break them down overtime, along with nitrates. Zeolite reactors create an oxygen depleted area that grows so much bacteria that it needs shaken off and serves as food for coral. All of this can be done in a reactor, outside of the main aquarium, without the risk of sedimentation or the hassle of discolored build up and algae outbreaks. Where before we used deep sand beds not only in the display but also in the refugium, simple filtration media is doing the denitrification work, accelerated by dosing soluble carbon and specific strains of bacteria.

For many aquarists, removing the sand bed from the aquarium wasn’t enough, a risk of sedimentation still existed if something disturbed the refugium’s substrate. Interestingly enough, denitrification tools today work effectively enough to allow a tank to exist with undetectable nitrates, without a refugium or deep/shallow sand bed. It’s important to note that refugiums offer more than just denitrification and nutrient export, but can serve as a place for amphipods or copepods to maintain healthy populations. In this regard they serve a reef aquarium much like a mangrove forest does a natural coral reef. 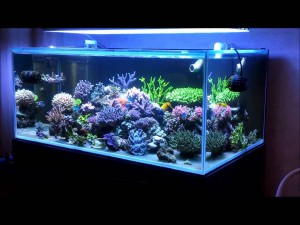 I personally opt to run my reef as a bare bottom tank. The aesthetics don’t bother me, as I’ve filled in the tank bottom with various LPS corals and a forest of zooanthids. I’ve seen some very creative bare bottom tanks. Over the years I’ve had corals damaged due to sedimentation and personally didn’t like the hassle of dealing with deep sand beds. Now that technology is available that offers competent denitrification that is easily and cost effectively put in place, I did away with the sand. Other reefers however cannot imagine a reef without sand and shutter at the sign of a bare bottom reef. On that front, to each his own.

When you run a bare bottom tank, debris still builds up on the tank bottom. Most aquarists vacuum this out via a siphon hose. If left too long, the debris build-up becomes unsightly, though with a proper circulation pump a lot of it remains suspended and is removed via mechanical filtration or protein skimming. If you are considering a bare bottom tank, it’s valuable to know if any of your fish or invertebrate species require sand. Sand sifting sea stars are of special note, although it’s often been believed that in a closed environment these sea stars struggle can get enough nutrition, so it’s arguable that they are best left on the natural reef. Some cleaner organisms like hermit crabs, peppermint shrimp and various snails are quite efficient at cleaning up a bare bottom tank. Scraps of food and even patches of green algae disappear from the bottom glass.

Removing the risk of sedimentation from a marine aquariums eases the mind of many aquarists, especially those that travel or leave their tank unattended for any amount of time. A simple slip of a powerhead or stir up of sand causes corals to become covered in slime, which drifts through the tank and attaches to anything, even other corals. This has a snowball effect, as organics within the sand have been released into the water and corals have been enamored with thick mucus that further agitates them. For many SPS species, one blast of sedimentation compiled with suddenly shifting water chemistry is enough to cause their demise. 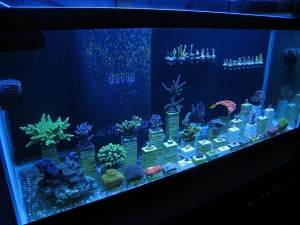 For reef purists, whom cannot imagine a tank without a sand bed, the risks of sedimentation must be assumed. While sedimentation is possible in either scenario (bare bottom or substrate) it is managed much easier and effectively when using a bare bottom tank. It is of value to implement a form of denitrification filtration if you’re running a bare bottom tank and often soluble carbon dosing alone won’t cut it. A bio-pellet reactor or zeolite are both good choices, but both come with their own set of challenges and considerations.