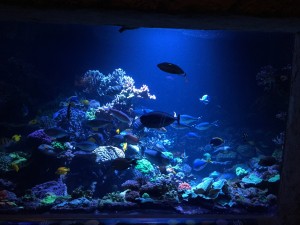 Ain’t no party like a spawn party, ’cause a spawn party don’t stop! You read that right: spawn party. Here at the Long Island Aquarium & Exhibition Center we have a spawn party about once a month. What’s a spawn party, you ask? It’s exactly what it sounds like. We sit around with some pizza and drinks and watch the fish have sex. We do this a couple of days after the full moon when spawns are the highest.

This last spawn party was a special treat. If we are lucky, we usually see only one or two species spawn. This time, however, we saw three species of anthias, yellow tangs, a Genicanthus species, and some flame angels all spawn. I was also able to catch some of the sexiness on video to share with all of you! Watch all of the videos below carefully, spawning is very quick. You could blink and miss it happen.

As the lights slowly turn off, more species start mating.

You’ll notice in the back of the reef tank that there is a plankton net. This is to try to collect some of the eggs from the spawn. In the morning, I take the net out and move the eggs to rearing tanks. I try to spit up the eggs into different types of tanks to experiment several different techniques.

The video above this paragraph may not be the best quality (it was taken with my iPhone through the lens of a microscope) but it gives you an idea of what the larvae generally look like after they hatch out. This larva isn’t technically a larvae yet, it is actually a prolarva, which means it has yet to develop some of the attributes of a standard larva. Since this prolarva is only 3 days post hatch, it has yet to develop a mouth. The mouth will begin to form around day 4-6 when they start to feed on live foods. It also has yet to form eyes but instead has just acquired proto eyes. Proto eyes can only sense light and dark, they are not able to “see” yet.

Spawn collections can greatly vary. On average, I can collect anywhere between 1,000 to 18,000 eggs. Not all of the eggs hatch and even more hardly make it past the first few weeks. Some larvae are easily identified a few days post hatch but a majority of them look similar and aren’t distinguishable for a few weeks. Only time will tell what the newly collected larvae will become.