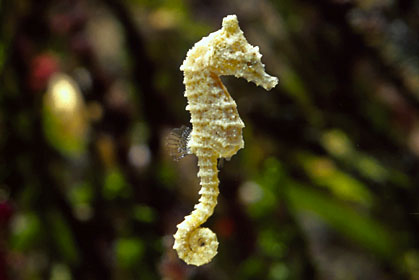 The Tennessee Aquarium has been observing some of the seahorses in the tank who appeared to be pregnant. Whats interesting about this species is that Male Dwarf Seahorses are the ones who actually give birth. The Dwarf Seahorse, whose scientific name is ‘Hippocampus zosterae’,are among some of the smallest seahorse species, with full size adults growing up to only one inch in length. Since these species are so small, aquarium workers have kept their eyes out for the species/ Just last Thursday, Aquarium workers saw the tiny baby seahorses, about the size of a grain of rice, swimming in the aquarium tank. These tiny new babies come just in time for Fathers Day 2015. MORE