The Isopod From Hell 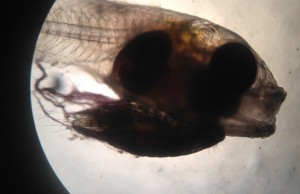 Today while checking up on one of my larval rearing tanks, I spotted something unusual. At first, I thought that one of the larvae had consumed something that was too large for it because it looked like its stomach was protruding. I removed the larva to further examine it under a microscope. To my surprise, I discovered that there was an isopod attached to my fine larva.

It was a Cirolanid isopod of the order Isopoda. Cirolanids come in many different sizes and have a variety of diets. Most Cirolanids are indeed parasitic.

However, it is not uncommon for some species of Cirolanids to be  just scavengers. In this case, this demon-spawn was attached to the bottom jaw of the larva; feeding off its soul. 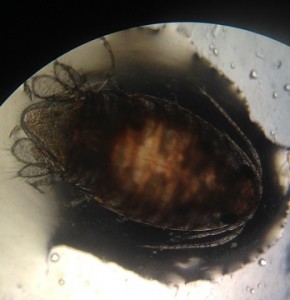 How did this parasitic terrorist get on my larva? It probably entered the rearing vat on the first day when I added the eggs/larva. This rearing vat was more of an experiment, so I wasn’t very cautious on what went in with them.

Cirolanid Isopod attached to larva, and then removed

Fortunately, I was able to surgically remove the isopod and return the larva to the vat. I am not certain if the larva will make it or not; I can only hope. However, I definitely believe that it has a better chance than it did with the giant life-sucking monstrosity attached to its face.

Newsday at the Long Island Aquarium