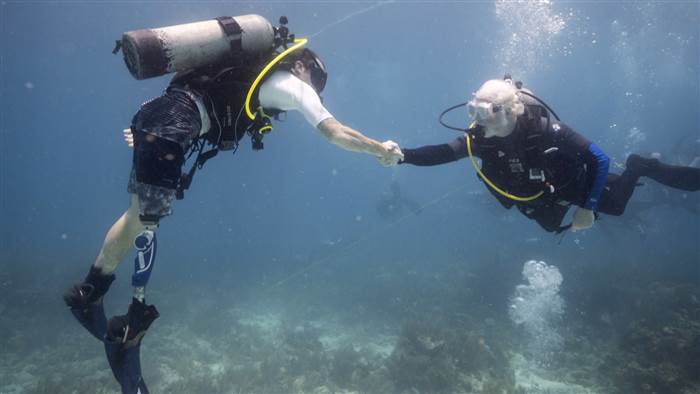 This story speaks wonders of the possibility of healing, healing which is occuring in our coral reefs and in human spirituality . Wounded veterans, who have survived what can only be called the impossible, are now working on something that many would agree at times ia also an impossible feat: restoring our coral reefs. Biologists at Mote Marine Laboratory (“Mote”) in Sarasota, Florida have been growing threatened staghorn coral (Acropora cervicornis) in their nursery, for the past eight years, with the goal for the corals to be replanted and restored into threatened coral reefs. Mote has joined forces with Combat Wounded Veteran Challenge (CWVC) and SCUBAnauts International in an underwater mission to restore Florida’s coral reefs. The mission og the Combat Wounded Veteran Challenge is ‘to improve the lives of our wounded or injured veterans by assisting them in realizing their newfound potential for the benefit of all.’  On July 20, 2015, over 50 divers, made up of volunteer citizen scientists, which included wounded veterans and SCUBAnaut youths, planted more than 250 new corals in Summerland Key,Florida.It’s wonderful to know that these dedicated individuals are now working on this very important mission to restore coral reefs. This is crucial work which our coral reefs and planet need to survive and I think we should all say thank you to all of those involved in this wonderful and challenging mission. MORE