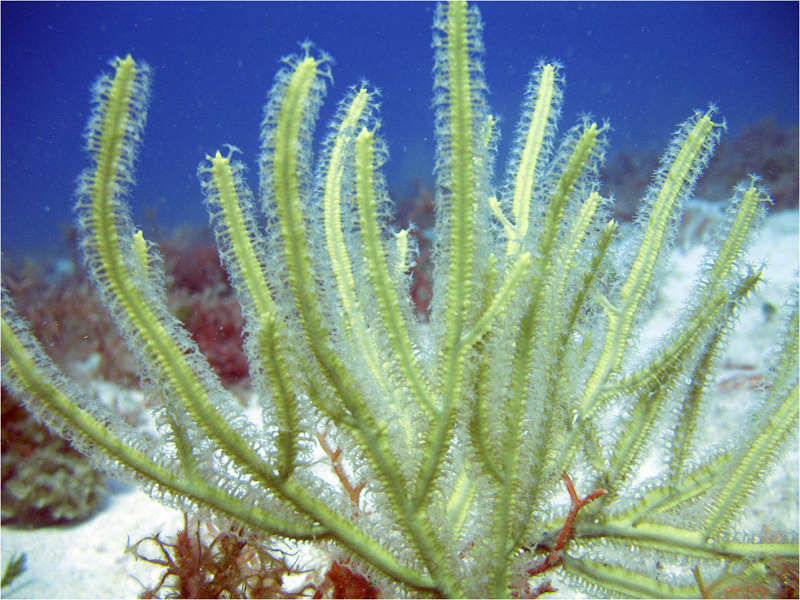 Caribbean coral reefs are frequently dominated by tall, branching octocorals known colloquially as “gorgonians”. Identifying these to genus is often simple enough, as most taxa are unique in shape and structure, but correctly diagnosing to species is often wrought with uncertainty. Proper identification requires verification by microscopic examination of the miniscule calcium carbonate sclerites embedded within the coral’s tissue, but, in the case of the common aquarium coral Pterogorgia, the sclerites all look the same. So, in a recently published study, researchers relied on genetic sequencing to identify an unusual variant discovered at a large undersea atoll located at the Saba Bank (in the Lesser Antilles). To briefly summarizes the four known phenotypes in this genus.

P. guadalupensis has wide flat branches, which have given it its common names of “Sea Blade” or “Ribbon Gorgonian”. An important feature to note is how the polyps arise from a pair of grooves running along the edges of each branch. Color varies from yellow to purple.

P. anceps is nearly identical to guadalupensis, but the diameter of its branches are Y-shaped or X-shaped, giving it the common name of “Angular Sea Whip”. Specimens from the Bahamas are reported to be somewhat intermediate in shape to guadalupensis (i.e. more flattened, less angular).

P. citrina differs in being a much shorter and bushier species (up to 30cm in height). It’s branches aren’t nearly as wide as the previous two taxa, and those branches are more ovular than flattened. Also, its polyps are arranged into individual slits, rather than a single groove. Despite its common name of Yellow Sea Whip, this species can occur in purple as well.

P. cf citrina “Saba Bank” also has its polyps arranged into individual apertures, but its branches are wide and flat, as in guadalupensis. Known specimens were all yellow.

Since this mysterious gorgonian from Saba Bank showed a blend of characteristics, scientists resorted to sequencing multiples genes (both nuclear and mitochondrial) to determine an identification. Unfortunately, corals often prove to be difficult organisms to study in this way, as the genes used don’t always show the type of clear differences between species as we find in other taxonomic groups. Illustrating this, of the five different genes used in this research, only two showed the type of meaningful differences which could allow for comparisons between species. 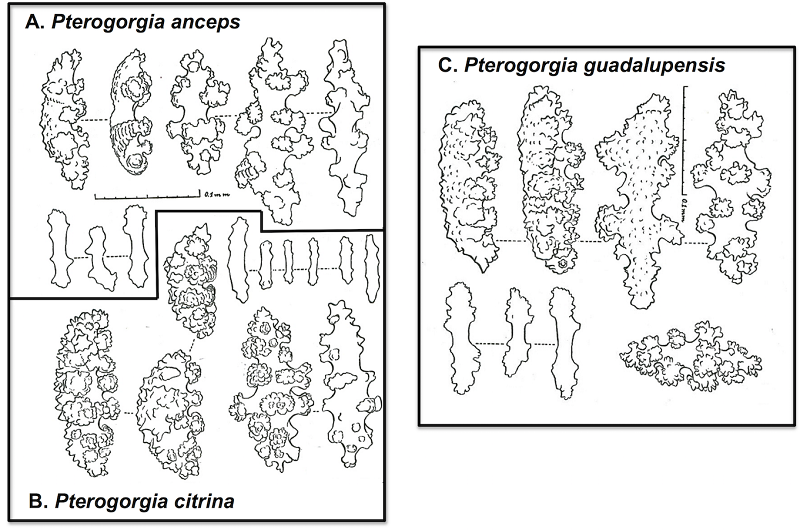 Comparison of sclerites in Pterogorgia.

What the results showed was that there are two major lineages in this genus: one corresponding to specimens with their polyps arranged into grooves, and the other for those with individual openings for their polyps. But there proved to be little evidence to support the existence of distinct “species” within these two lineages. That is to say, guadalupensis and anceps have essentially the same genetic sequences, as do citrina and the Saba Bank coral. This might not be terribly surprising, given that intermediates are known for at least one of these pairs, but it still comes as a bit of a shock that such familiar and widely recognized species might not be quite what we had thought. 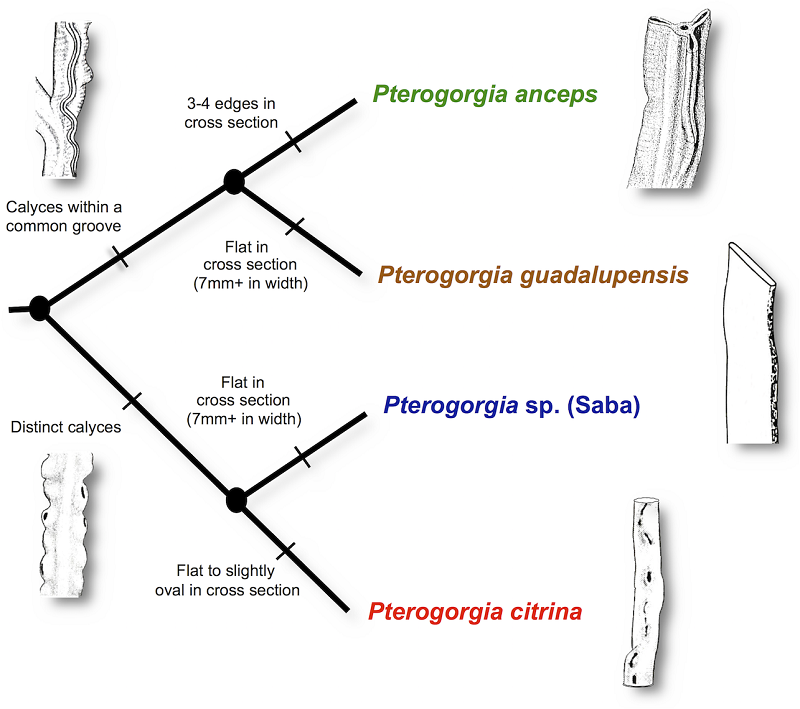 This is more of an identification guide than a phylogenetic tree. Credit: Wirshing & Baker, 2015

The authors have chosen not to make any taxonomic changes yet, as more research is warranted before we fully understand the cause of this possible intraspecific variation. Perhaps additional genetic sequencing will reveal more robust support for these being separate “species”, and perhaps more rigorous morphological study will support this as well. Or maybe these will just prove to be variations within a single morphologically plastic taxon. Just as we see with the diversity of our own species, why couldn’t we have a gorgonian species which comes in purple and yellow, flat and angular? Alternatively, we might be seeing signs of extensive hybridization between two distinct “species”. Corals prove time and again that they refuse to be easily categorized by our Linnean system. If you have one of these corals in your tank, take a closer look and see what identification you reach.
Wirshing HH, Baker AC (2015) Molecular and Morphological Species Boundaries in the Gorgonian Octocoral Genus Pterogorgia (Octocorallia: Gorgoniidae). PLoS ONE 10(7): e0133517. doi:10.1371/journal.pone.0133517