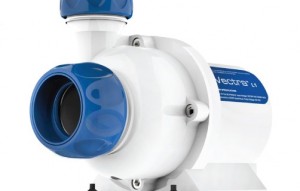 It seems like when Ecotech Marine releases a new product, it immediately becomes a hit. The Vortech circulation pumps have become the bar by which all circulation pumps are judged, and Radion lighting is often considered the high standard in LED lighting. So how does Ecotech fare in branching out to a less exciting product, the return pump? It’s not that return pumps aren’t exciting; it’s just that they aren’t really thrilling. They pump water from a sump back into the aquarium, and up until now most of them had a fixed gallon per hour (gph) flow rate. Although it could be argued that return pumps are a very under-rated part of reef aquariums.

Think about it, the return pump is what dictates the water level in the sump. Faster returns pump water out of the pump chamber quickly, while slower units allow for a bit of dwell time. They also dictate the speed at which water is pulled through overflows, passed over mechanical filtration and spread across various chambers within the sump. In this regard they are vital, and perhaps one of the most important pieces of equipment on an entire system. In closed loop applications return pumps push water out a variety of outputs, creating a powerful, varied current within the aquarium.

Like any Ecotech product, the Vectra isn’t just another return pump. In fact it’s a smart, high functioning piece of equipment with a lot to offer almost any aquarist. Though is it for everyone, and is it worth replacing a perfectly good return pump with the new Vectra? 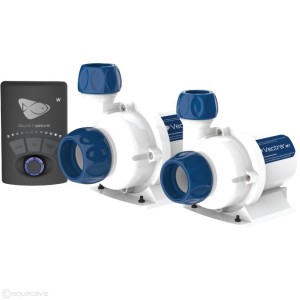 The pump’s aesthetics (if they even matter)
radion lighting is sleek, polished and futuristic and Vortech pumps (with their external motor) look different enough to catch most people’s attention. The Vectra on the other hand, well it looks like a return pump. It certainly isn’t ugly, but it isn’t something you would want to display for all your friends, and it certainly isn’t going to impress the ladies. It’s a pump; there is no question about that. Considering these units spend their lives tucked away in a sump or back end of a closed loop, it doesn’t really matter what they look like anyhow.

The Vectra is solid, it certainly isn’t cheaply made, nor does it have any annoying gimmicks, such as a + or – slider switch to control flow. It’s a solid block with a large cable leading out to Ecotech’s familiar Quiet Drive driver. It has a separate power supply not unlike other Ecotech products, and a port that allows you to connect the companies’ battery back up. Given the importance of return pumps, I would assume many aquarists would want a battery back up just for their Vectra. With Ecotech’s products, aquarists can now have lighting, circulation and return all backed up via a strong battery system. For peace of mind alone, that’s a big deal. 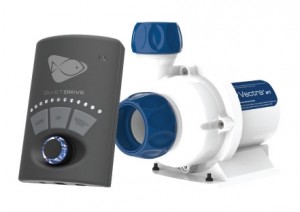 I’ll admit I didn’t use the Vectra in any closed loop application, so I can’t vouch for how it may or may not perform in that regard. Set-up as a return pump was quite easy. Naturally there are several options, and the pump can be used both internally (under the water) and externally, (plumbed into a port on the sump). Like my previous return (a 1,250 gph sicce) I opted to install the Vectra in my sump’s pump chamber, under the water. You can opt for solid white PVC piping, or in my case installing an adapter (not included) at the Vectra’s output and using flexible vinyl tubing. All in all, after one trip to the hardware store, it was a very easy return pump to install.

One thing the Vectra does differently than any other pump on the market is create a pump that can be tailored to any aquarium. This is done via calibration. It’s not a hard process, and anyone familiar with aquarium equipment will breeze through it, though for those not so familiar it may pose a challenge. When you first switch your Vectra on, it boots up in constant speed mode. Like vortech pumps, turning the dial will either slow down or speed up the pump, increasing and decreasing the flow rate. The real power lies in calibration, which is done via Ecosmart Live. For efficiency purposes it’s best to use a PC or Mac.

Calibration first turns the pump off, and then slows it down to where no activity is taking place at the overflow. The pump is running, but not moving enough water to pass water out of the tank and into the sump. You will constantly be running back and forth from your computer to tank, watching for this moment. You then tell Ecosmart when flow to the sump has stopped. After a few moments, Ecosmart gives you the option to either increase or decrease that point. In my case during calibration I didn’t find that the pump ever stopped flow through into my sump, so I decreased this point. The idea is that the pump can be calibrated to a host of different aquarium systems, by custom tailoring the absolutely slowest amount of flow.

Once calibration is complete you have the option to either set various pump intervals throughout a daily schedule (changing the speed percentage the pump will run) or set the pump to run at one speed, all of the time. These options will depend largely on set-up, as speeding up or slowing a return pump can alter the water level in the sump kicking on an auto top off when it isn’t really needed.

Calibration isn’t difficult, but it does take some time and attention. It’s certainly something that’s best accomplished when you have about 15 – 30 minutes with no distractions as it’s vital for pump performance that this step is properly completed. To give you an idea of the difference it makes, when I first turned on my vortech anything above the lowest setting on the driver was way, way too much flow. After calibration I can run the pump up to nearly 100% with no problem.

Take calibration and Ecosmart Live out of the equation, and the Vectra is still a powerful return pump with a great quality build. It’s pretty damn quiet, certainly a few decibels quieter than the sicce it replaced, which could be heard grinding away across my fish room. It’s also a water mover, and in my 250 gallon reef at full speed it blasted all kinds of sludge and debris out of my return lines. In fact when calibrating Ecosmart Live gives the pump a powerful push, with the specified goal of getting air/gunk out of your system’s lines. Enough gunk came out of my lines that I did a water change shortly after pump calibration.

Worth noting is the Equipment Healthy designation that appears in the Vectra tab of Ecosmart Live. Apparently the software runs a Vectra diagnostic at different intervals. If the pump is edging toward failure, the software can give the aquarist a heads up, potentially preventing a catastrophic disaster. 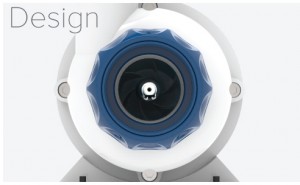 I would place a pretty hearty bet that Ecotech has a winner with the Vectra. I can’t help but think they’ve revolutionized the return pump, the same way that the vortech revolutionized circulation. There are enough smart features on this pump to make many aquarists consider replacing their existing returns. While calibration is a bit tricky, the fact that it tailors the return pump to the system it’s attached to makes it very worthwhile.

On it’s own (without Ecosmart Live) it’s a very nice and powerful return, but with all the smart features it’s truly something innovative. The Vectra (and all Ecotech’s products) stand as testament that there is some serious brainpower at the Ecotech office, and they aren’t afraid to think out of the box (of water in this case).

Perhaps I spoke too soon. Last evening I walked downstairs before going to bed to check my tank, to find the return pump not running. After some checking, I noticed the Vectra’s power supply indicator light was off, even though the unit was plugged into a functioning surge protector. After some testing, I determined the power supply had failed, thus kicking off the pump. Luckily I had a Ecotech Marine vortech MP60w power supply laying around, which is identical to the Vectra’s, which brought the pump back online. Certainly something to think about, as a failed return is a potential tank killer, and luckily I caught mine before too much time had elapsed. Also, it’s worth noting I had been in Ecosmart Live just two hours before the pump failure, and the monitoring system reported a Healthy Vectra. A healthy vectra that just two hours later was not running, due to a faulty power supply.

I spoke with Ecotech today regarding my Vectra power supply failure. They are shipping me a new power supply, and are not aware of any reports of other failed power supplies. They said they will keep me in the loop, if they learn of other reports of failed Vectra power supplies. Also, I am shipping the faulty power supply back to them for testing, and Ecotech is going to email me when they have determined the cause of failure, and if the problem is something that could affect other Vectra users. I will keep everyone updated here as I learn more.

Long Island Collecting Log: Some days, it isn’t about the collecting