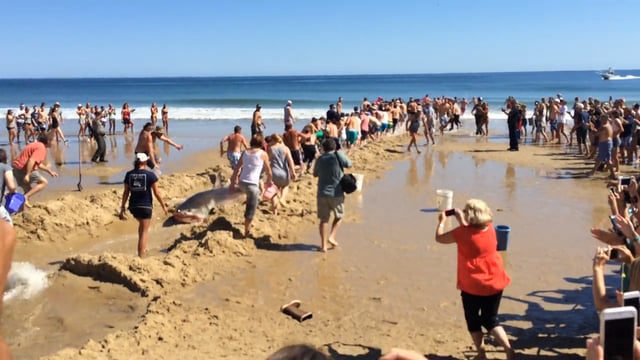 Hundreds of vacationers in Wellfleet, Massachusetts came together to try and save a beached great white shark that swam ashore a packed beach over Labor Day weekend. A 14 ft adult male shark washed up on Sunday at 8:09 am. People on the beach dug a trench and created a holding pool where they used buckets to continually pour water on the shark. A boat owned by the Atlantic White Shark Conservancy soon came to the scene. The people on the beach tied a rope around the sharks tail, and the boat pulled the shark out to sea. Sadly, once it had reached deep enough waters, it was apparent that the great white had died. This is the second Great White that has washed up on the shores of Cape Cod this summer. Occasionally, sharks wind up beached on the sand as they chase their prey into shallow water; they can also get stranded as the tide goes out. Sadly, most beached animals do not survive. Great Whites live in almost all coastal and off-shore waters with temperatures between 54 and 75 degrees, with the most concentrated populations residing in the North East United States and California, Japan, South Africa, Chile, Oceania and the Mediterranean.   MORE