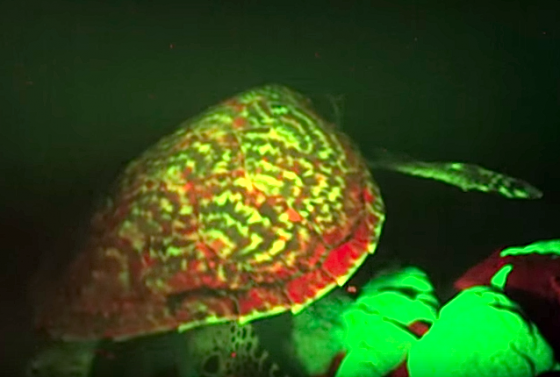 Scientists have discovered the first biofluorescent sea turtle in the Solomon Islands. The scientists were filming small sharks and coral reefs in the South Pacific, when they had were lucky enough to encounter this amazing Hawkbill Sea Turtle that appeared to be glowing with red and green light. The footage was captured in late July by David Gruber of the City University of New York and his team. Gruber is an explorer for National Geographic who described the encounter with the turtle, “It was absolutely gorgeous,” Gruber said in an interview with CNN. The turtle swam into the team’s lights while they were filming coral underwater. The turtle’s appearance was unexpected and took everyone by surprise, he said. “It’s a bit like a mystery novel,” Gruber said. “It started with jellyfish and coral, and the fluorescent molecules jellyfish and coral create has lead to monumental breakthroughs in biomedical science.” Biofluorescence is not to be confused with bioluminescence. Bioluminescence is a chemical reaction that doesn’t produce a lot of heat so it is sometimes called “cold light”. Biofluorescence is not a chemical reaction, rather it is a process where an organism absorbs blue light and emits it as a different color, usually red, orange or green. Until very recently it was believed that only certain marine animals, like corals and jellyfish, had the capability for biofluorescence. However, scientists and the amazing ocean keep showing us how very little we know.

As it turns out, sea turtles glow in the dark!