Announcing the conversion of two Steve Tyree print books, which have been out of print for a few years, to ebook format. They are both available for purchase and download at reef farmers.

The first is: Volume 1 of the Coral Maintenance Advanced Techniques:
The Environmental Gradient Cryptic Sponge and Sea Squirt Filtration Methods 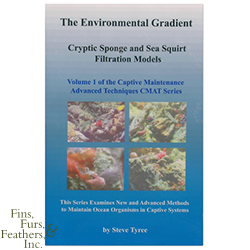 As the website states: This eBook describes a natural captive filtration system that was developed by Steve Tyree during the late 1990’s. The system is based on setting up low lighted or non-lighted cryptic areas where low light sponges, sea squirts and bivalves can proliferate. Aquarists can even setup a zero plumbing reef system. The electrical running costs of such a system are very minimal. The eBook details the discovery of the method starting from where it all began in 1996/1997. Steve found some strange sponge growths in his Berlin type reef system. But this book is more than just a summary of the discovery. There is an entire chapter on the history for all captive reef filtration methods commonly used up to the year 2000. Steve also spent some time searching the scientific literature to find natural evidence for this methodology in nature. An entire chapter describes how to setup this system that even includes a step by step procedure. There is also an amazing chapter on analyzing organically based systems that will enlighten the reader who is constantly thinking in the inorganic nutrient realm. Processing and properly handling organics is the key to low inorganic levels. Concepts such as water color and total bacterial density may be new to some aquarists. The information contained within this eBook is as relevant today as it was when first printed in the year 2000. After reading and understanding the concepts and the science involved, readers may never again analyze natural reef platforms or captive reef systems the same way. Price is just $9.99 which is a significant savings from the original $30 retail print price. That print book has actually been out of print for a few years. This book has 300 BW pages, color covers, 31 color plates, about 90,000 words, 30 tables and 30 figures.

And the second is: Captive Oceans Volume 1 – The Porifera (Living Sponges)
Their Biology, Physiology and Natural Filtration Integration 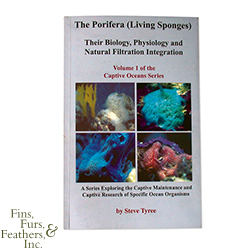 From the website: The sponges are perhaps one of the most over looked animals that captive reef aquarists have in their captive reefs. They also happen to be one of the most important animals inhabiting natural tropical reef platforms. This eBook gives living sponges (The Porifera) the importance they actually deserve. Almost every captive reef aquarium has sponges living under their reef rock or in the deep protected areas of the reef rock. Some aquarists have even purchased whole sponges typically collected from light exposed natural reef areas. This eBook begins with 5 chapters that explore the scientifically known information concerning sponges in nature. The main nutrient sources for sponges are bacteria and dissolved organics. Historically keeping sponges in captive aquariums has been difficult. One of the past problems was improper handling and collection. Most sponges must never be exposed to air. They lack the ability to clear the air from their internal feeding channels. Using sponges as a natural way to reduce dissolved organics and bacteria in captive systems has proven to be successful. In fact the author has used sponges as a primary filtration component for a natural filtration methodology. Research into that methodology was used to construct this book. Think of this book as an operational manual for the natural sponge filtration unit. The final three chapters of this book concern the captive handling, captive maintenance and captive utilization of living sponges. Price is just $9.99 which is a significant savings from the original $29.00 retail print price. That print book has actually been out of print for a few years. This book has 204 BW pages, color covers, 48 color plates, about 53,700 words, 25 species data sheets, 8 tables and 31 figures.