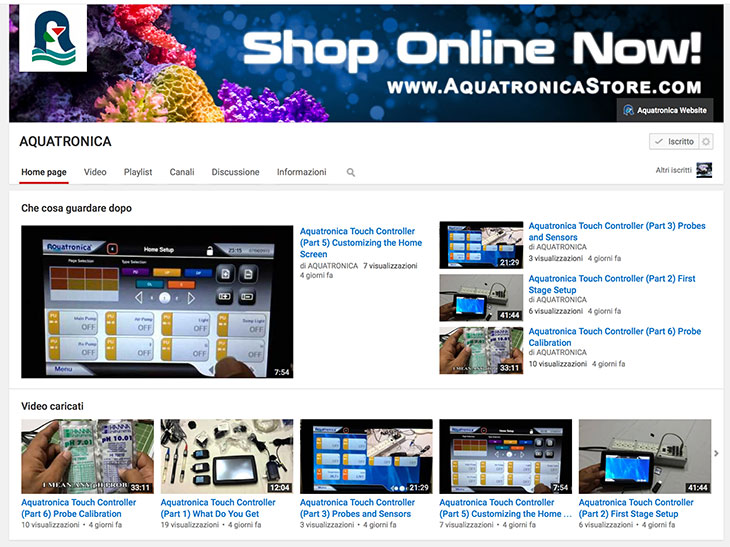 I reviewed Aquatronica’s Aquarium Controller when it first launched, and reported that it was a great product. It still is a very useful review (in Italian), and I recommend that you read it if you can. Today I am here to talk about Aquatronica, and to bring you some new news.

Aquatronica’s brand is still going strong, and now the company has created and published a set of informational videos to show us how their new controller system works. For the past few years, the name Aquatronica has been associated with LED lighting, but I feel that its strength lies in their controller systems. To put it simply, Aquatronica represents the real aquarium Automatization

Since MACNA 2015 in Washington DC,  Aquatronica has published six new videos on youtube that explain the use of their new Aquarium Controller.

The videos can be helpful to anyone who owns the controller, and, to those who are still thinking about buying it, can give an idea of how it works.

Video number 1 tells us about the system potential.

Video number 2 explains how to set it correctly.

Hooking up and configuring Probes and sensors on the Aquatronica Touch ACQ140 Aquarium controller.

Video number 3 talks about the probes and the various sensors.

In part three of this series I show you how to install and name the probes and sensors that connect to the Aquatronica Touch and show you the specific settings needed for each of the probes.

Video 4 gives us an introduction of the new firmware installation.

Video 5 shows how to modify the homepage.

In this video I will show you how to customizing the home screen of the Aquatronica touch aquarium controller.

The last video, number 6, explains how to calibrate the various probes.

Calibrating the Aquatronica Touch Probes: including Temperature, Salinity and pH. Plus some other general tips on calibration and a look at some of the built in graphing capabilities.