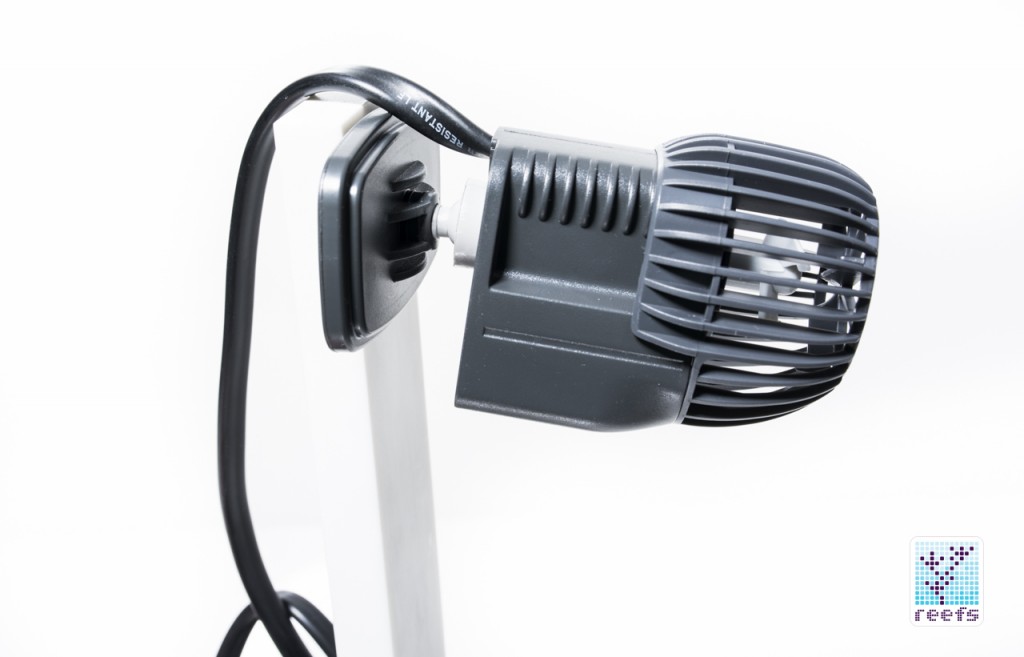 Sicce is making a “big splash in a small package” with their line of nano pumps and propeller powerheads. I’ve recently had the opportunity to test the tiny Syncra Nano return pump (you can read the review here), and today we’re going to visit another Sicce small-sized pump and the perfect match to Syncra Nano- the Voyager Nano. 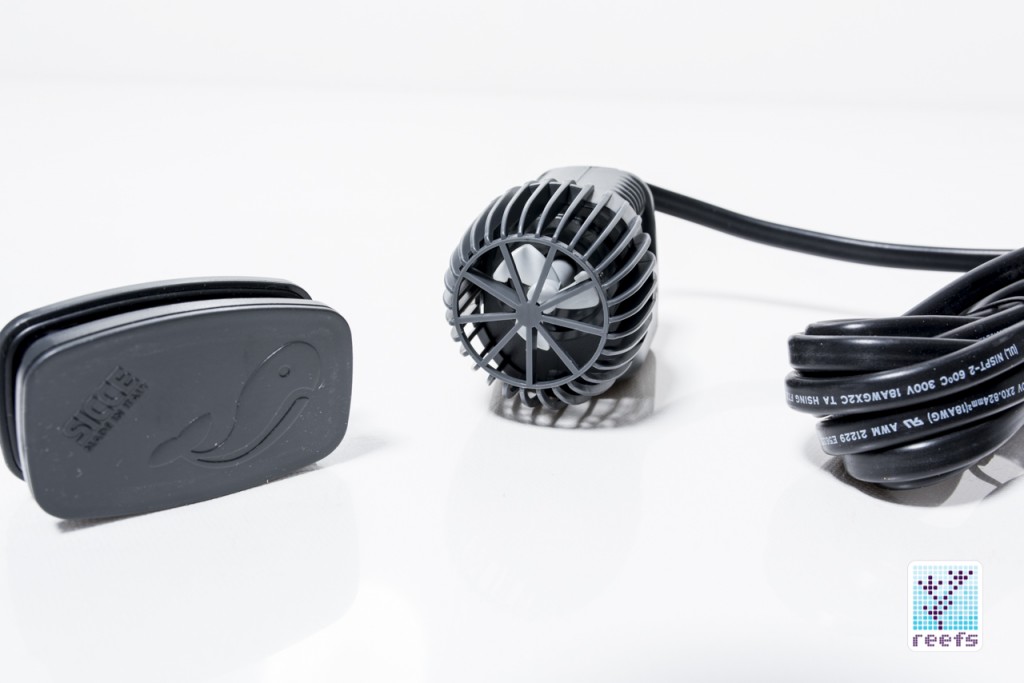 sicce Voyager Nano is, as name suggest, the smallest offering in the Italian manufacturer’s propeller pumps line. It is marketed for aquariums up to 38 gallons (saltwater setup) and 52 gallons (freshwater). The specs are as follows: 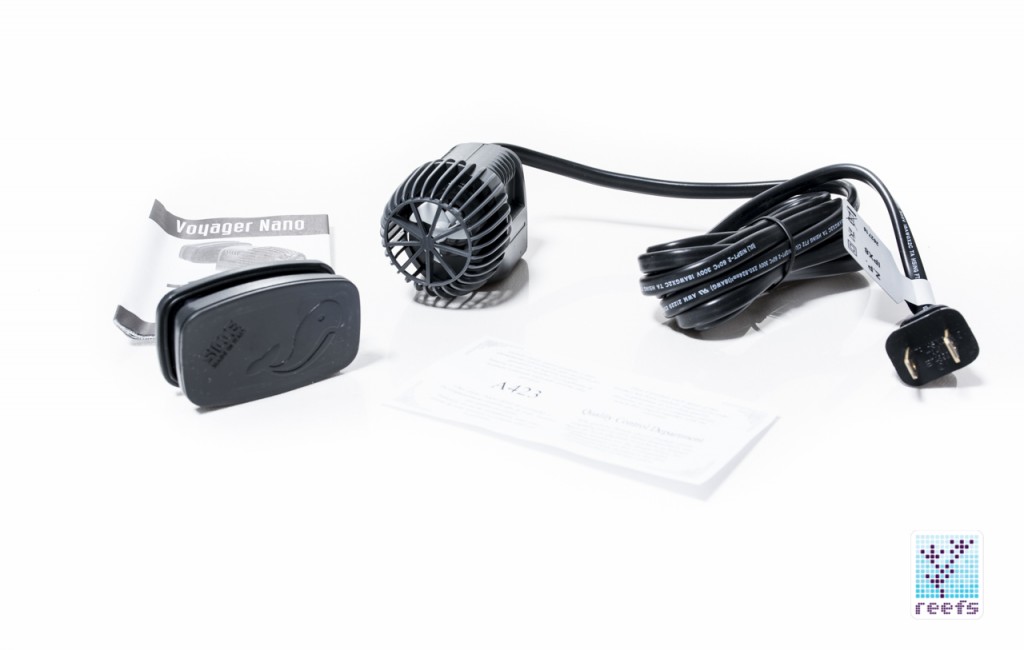 sicce Voyager Nano comes in a retail box and contains the pump, a magnet holder with swivel head, and an instruction manual. Similar to the Syncra Nano return pump, the Voyager Nano is small, very small. 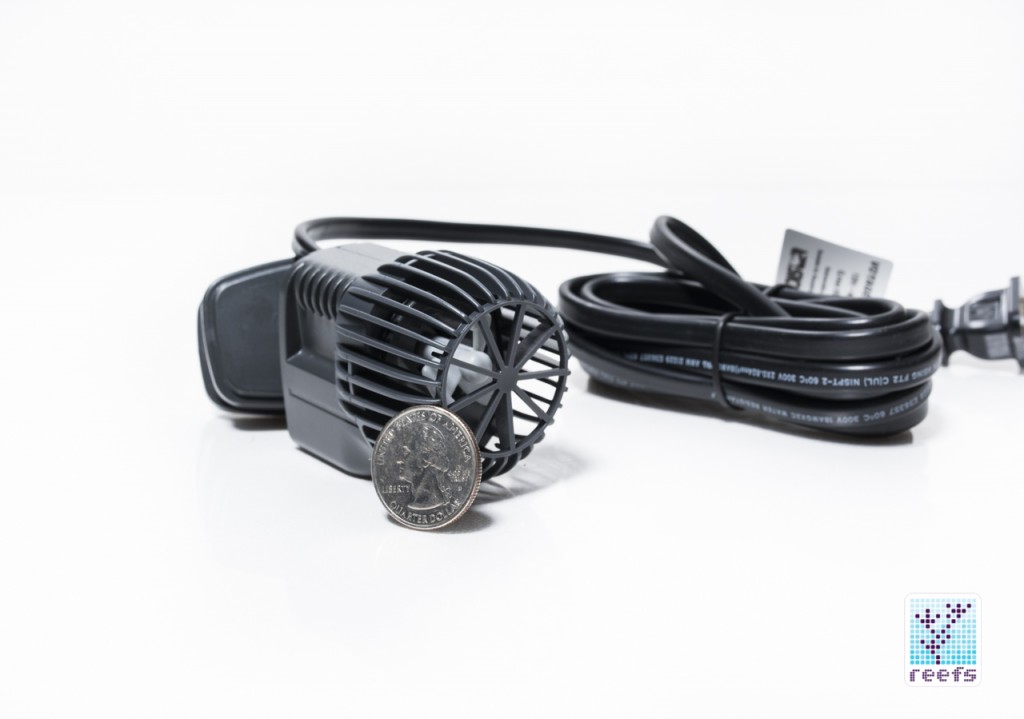 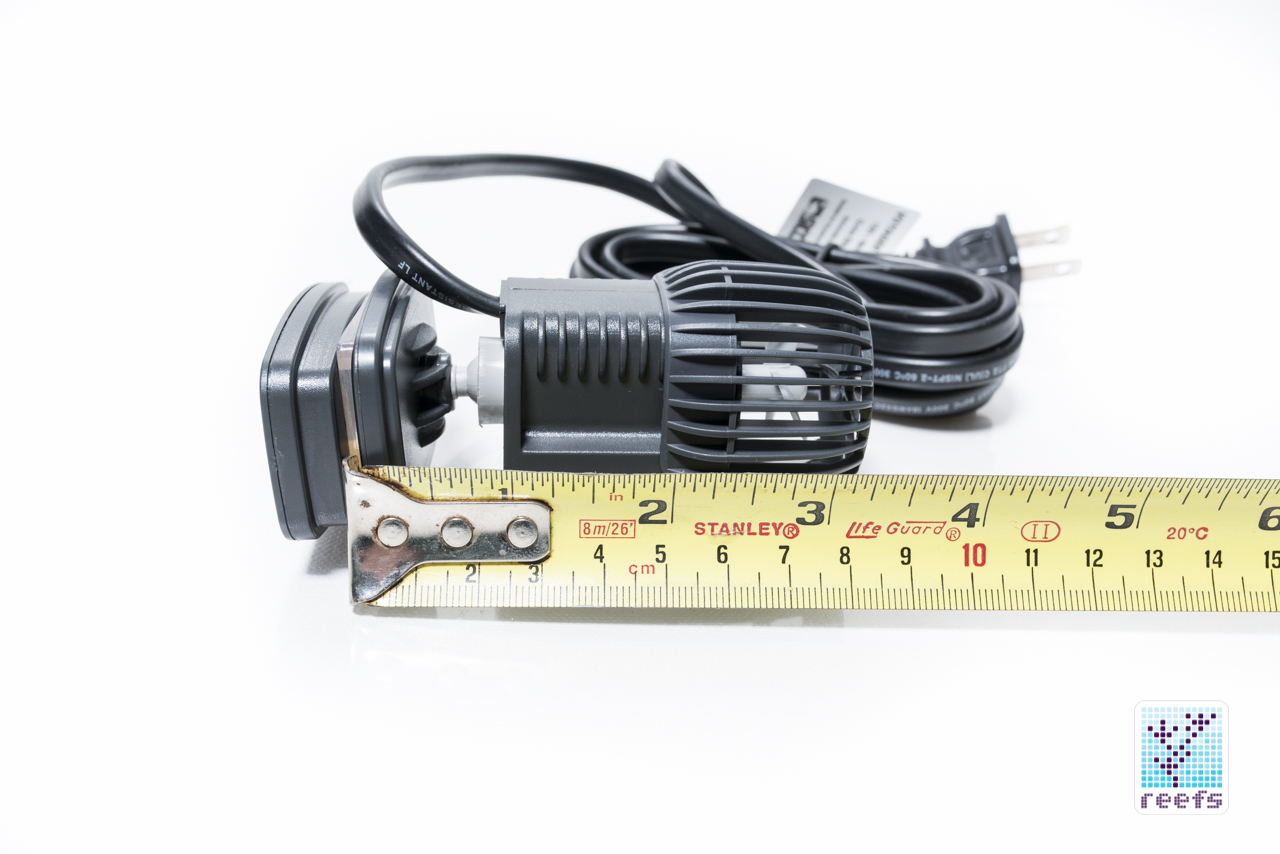 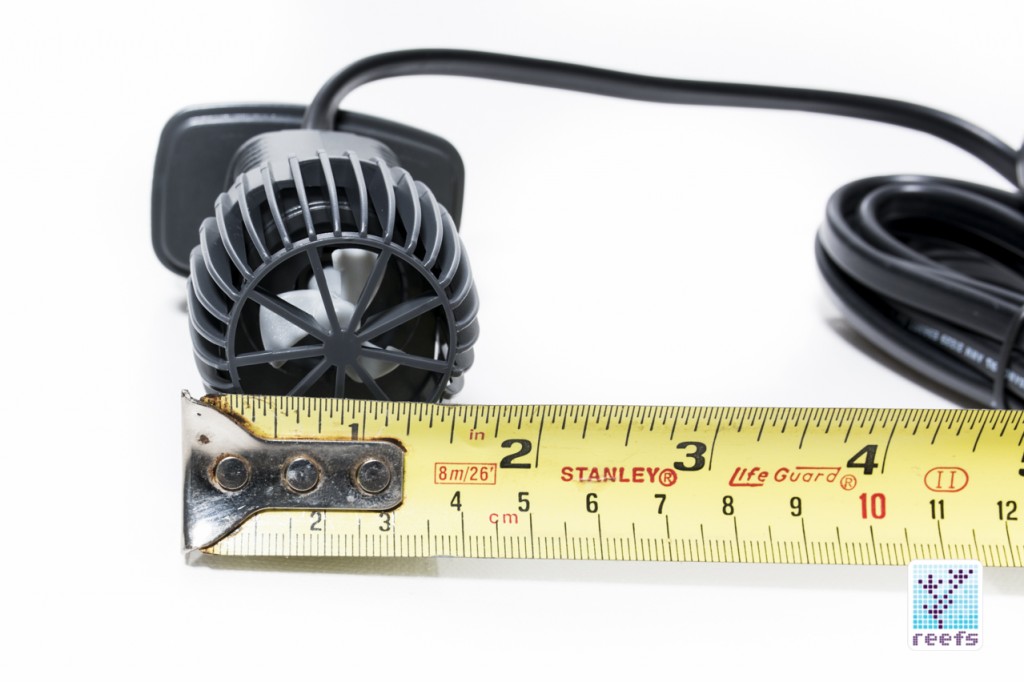 Measuring only 2-3/8” long x 1-3/4” wide x 2” high (pump only), it’s among the smallest propeller pumps ever made. As I mentioned  before, Voyager Nano is held by a magnet, a standard feature these days for this type of pump. It’s rated for glass up to ½” (12 mm) thick- I’ve checked that claim by mounting it on my rimless aquarium’s side panel that is ½” and it held somewhat firmly, but not anywhere as strong as the Tunze or vortech pumps I’ve had before. I would say a 3/8″ maximum thickness is more realistic. The inside part of the magnet affixes to the powerhead via a ballhead attachment, which offers about 120 degrees of movement on both axis. The bullhead is plastic, but it looks solid. sicce swivel head design differs from other pumps on the market; it offers more control over the way the flow is directed in the tank. I worried about the possibility of the ball joint becoming loose after some time, but a quick online search returned no results of such a problem with prolonged use of Voyager pumps. So far, so good. 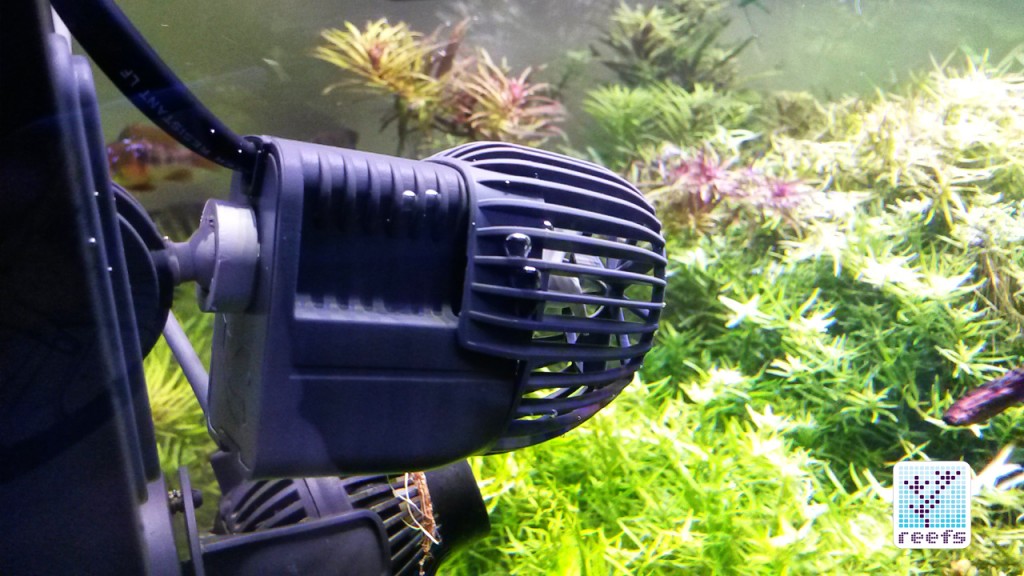 I use my 48” long freshwater planted tank as a test ground for all propeller pumps- I can see the angle and wave pattern easily, just by looking at stemmed plants moving with the flow. My findings with sicce Voyager Nano pump are as follows: 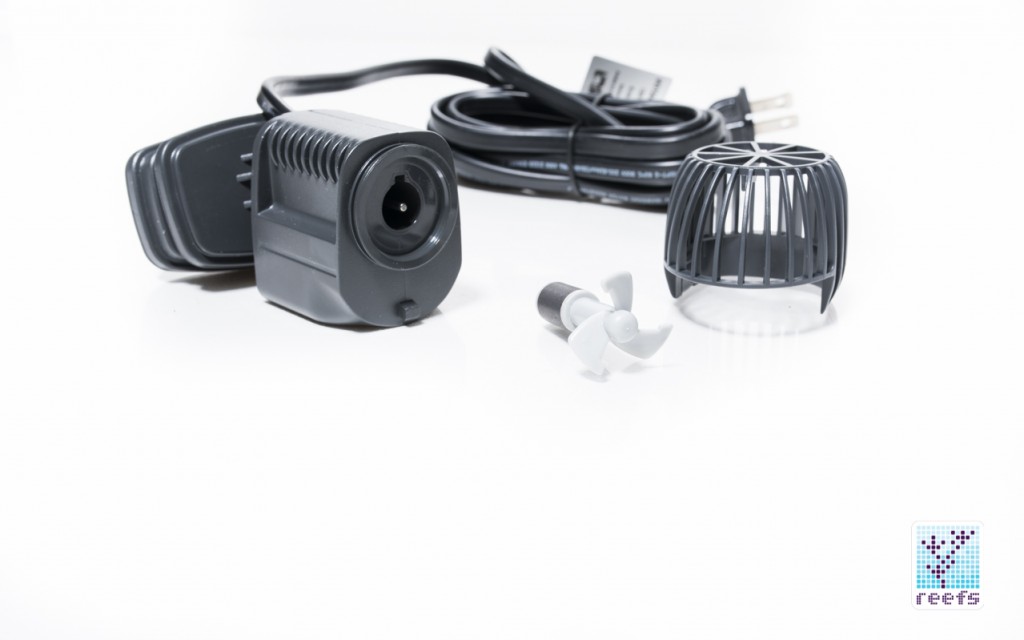 sicce Voyager Nano is a very fine pump. It is compact, energy efficient, makes almost no noise, and pushes a lot more water than one would expect. The build quality is there (sicce makes all their pumps in-house in Italy) and it is covered by a  3-year warranty with service center located in the US. On the downside, Voyager Nano offers zero control over the flow pattern (though it is compatible with sicce‘s own Wave Sutter Pump controller) and with it’s rather high price tag ($35-$40), some may find cheaper options elsewhere. It’s really a matter of reliability and quality versus lower price tag and/or more control over the flow. You make the choice.