By Marcin Smok 6 years ago2 Comments 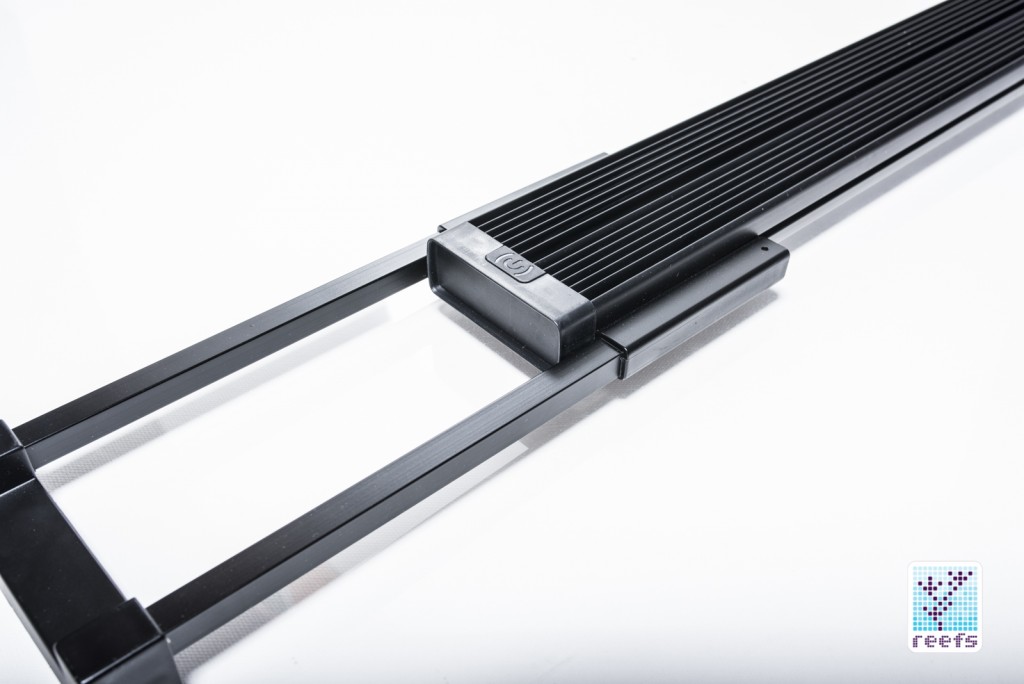 Three years ago, I reviewed the Sea LED Light, Fluval’s first attempt to enter the reef-capable LED lights scene. At the time, it wasn’t a revolutionary light, nor was it a high end fixture. However, it had an attractive retail price, a large coverage area, a wide availability through chain pet stores, and it grew less-light-demanding corals just fine. The light became popular, and proved that low-power SMD (surface mounted diodes), when packed together tightly, can support growth of photosynthetic animals in a saltwater setup. The blog donated the light in 2012 to a struggling reefer who had lost his tank during Hurricane Sandy, and he still enjoys it to this day, growing zoanthids and leather corals in a 20g aquarium. A year ago, Fluval announced the second generation of its reef-oriented LED panels, consisting of the Fluval Halo Nano, the Fluval Sirius Reef (which never made it to the shelves), and the subject of my review today, a new version of the Sea LED, called the Marine & Reef Full Spectrum Performance LED 2.0.

Fluval uses a lot of technical language to describe its product; let’s start by decoding these claims. The LED cluster consist of 168 SMD diodes arranged in a conventional rectangular shape, with 4 rows of 42 emitters spread almost through the light’s entire length (22″, or 56 cm); they are grouped into two dimmable channels- the white/daylight and the actinic/blue. The blue emitters have different wavelengths – 400, 420, 440, and 460 mm, one 620nm red diode and 15000K white diodes. Primary lenses provide a 120 degree light spread and are covered with a watertight splashguard. Just like the smaller Halo, the M&R 2.0 is completely waterproof and should survive a drop in the tank without any issue. Fluval’s panel has, like in the previous generation, built-in expendable legs that allow one to mount the fixture on tanks up to a foot longer than the light itself. So in this case, the 24” light can be affixed to a 36” long tank. There is also an optional hanging kit available for purchase.

In terms of controllability, the light comes with one plug and a single button to operate all its functions, it also has a built in Wi-Fi module to communicate with Fluval’s own control hub.
Finally, Fluval claims that the M&R 2.0 draws 32 W of power and produces 1350 Lumens of effective light on its brightest setting. 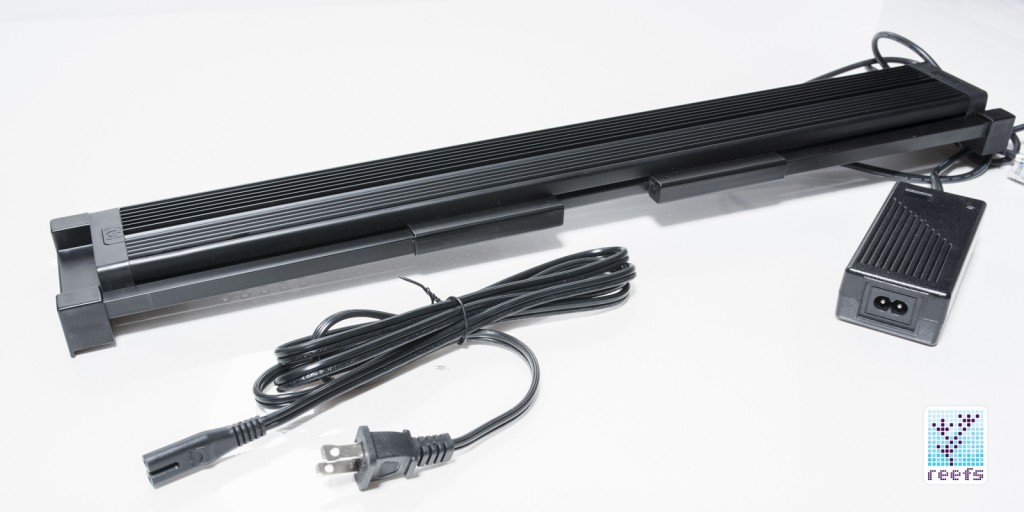 Fluval’s Marine & Reef 2.0 comes in a long box, printed on all sides with charts and test results. The box contains the fixture itself with built-in brackets, a power adapter and a printed manual. This new fixture looks almost identical to the previous generation, aside from the new touch button and a different LED cluster. That is not necessary a bad thing; the light looks and feels sleek, it has a nice low profile and weighs only 2 pounds (900 g). It measures 22″ (56 cm) with the legs folded, and 34″ (86 cm) with the legs at their maximum length. 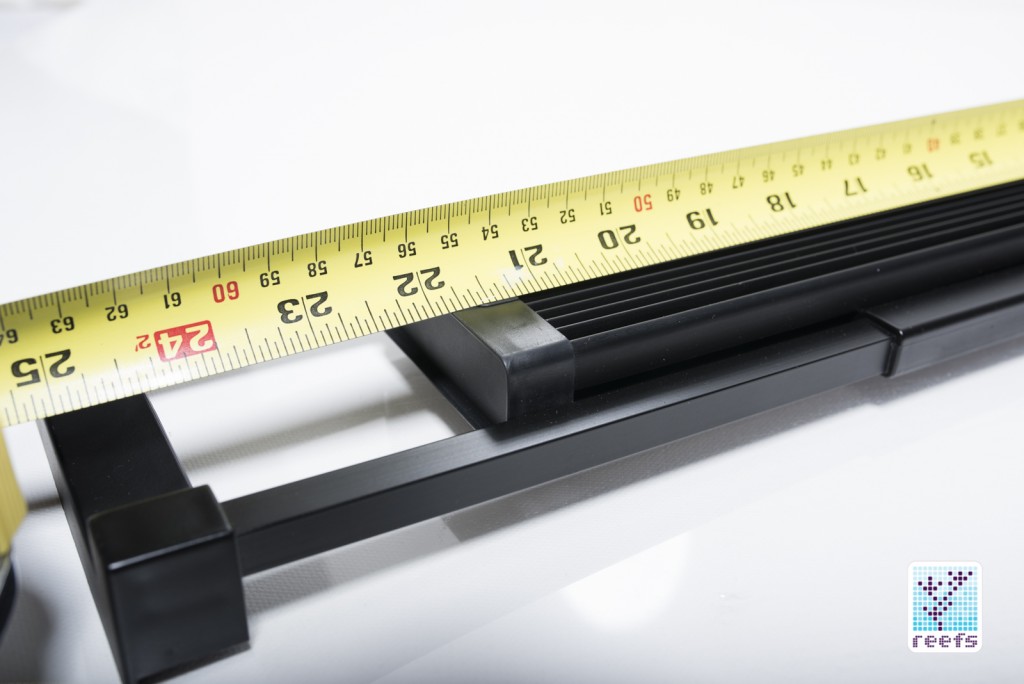 The LED cluster is arranged in a clever way, with white LEDS on the outer rows, and then “wrapping” the blue and red LEDs in four sections, maximizing color blending and evening out the light spread.

I tested the light over a 20” cube reef tank, and I measured the light against a 24” long empty aquarium, just to see how well the fixture rests on the tank’s rim. 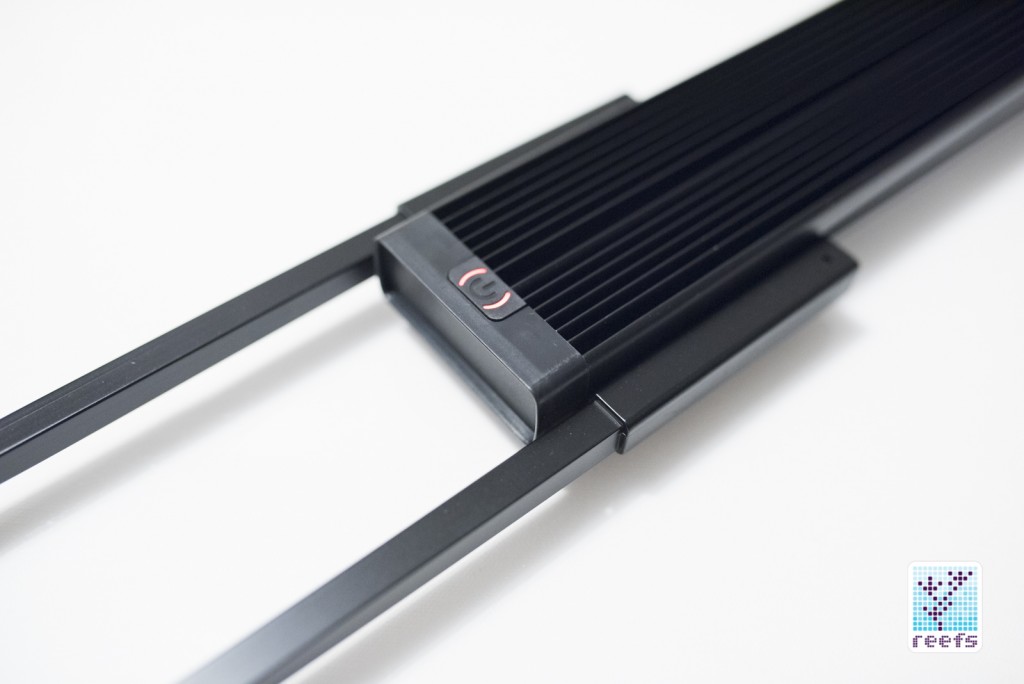 The illuminated power buttin is pictured above – tapping the button once switches on all the LEDs, another tap turns on actinic, and one more turns the light off. Tapping and holding the power button changes the intensity between a few pre-programmed settings. That’s it, there are no other physical buttons on the fixture, though I must report that I found the button less responsive than I would have preferred.

While there is no built-in timer, which means that all photoperiod adjusting must be done manually, the M&R 2.0 “remembers” its last state. This allows for third-party-controlled programming, but switching from daylight to actinic can only be done with the touch button. 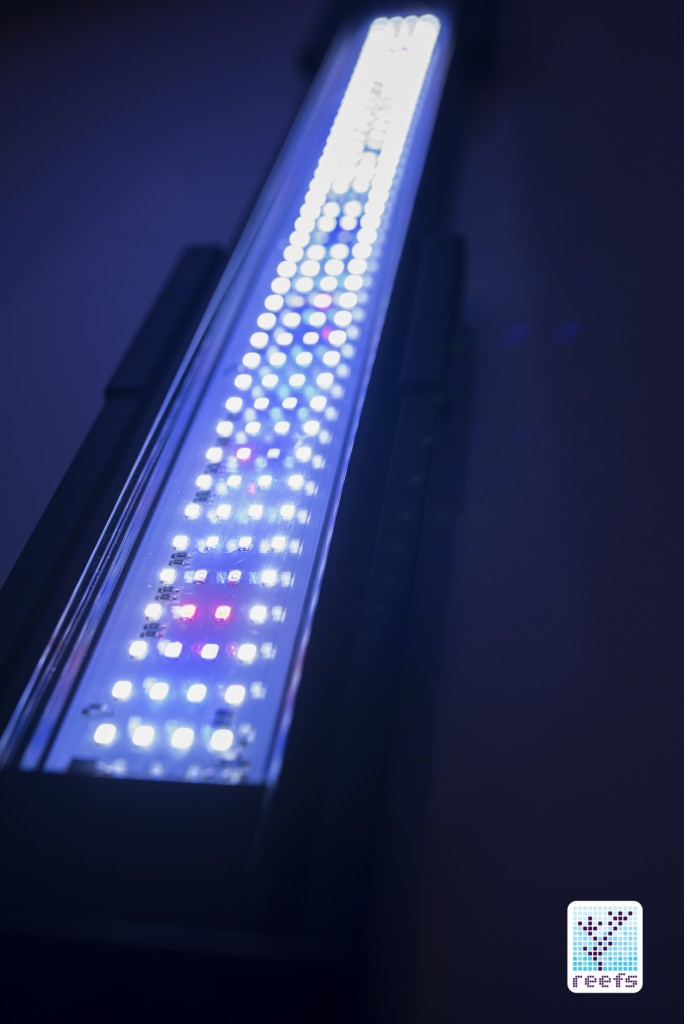 The light impressed me with its even spread and overall brightness. The M&R 2.0 is essentially a long, narrow strip light, and is excellent for use with US standard-sized aquariums with a width (front to back) not exceeding 18”. From my observations, the effective light spread covers a width 15” down the entire fixture’s length (in this case 22”), plus 3-4” past the edges, to a depth of 16” from the LED cluster. The quality of light is good, but nothing to rave about. The actinic-only option would be perfect to showcase fluorescence in corals placed up to 12” away from the light; beyond that point, the light fall-off is too great to properly illuminate corals. 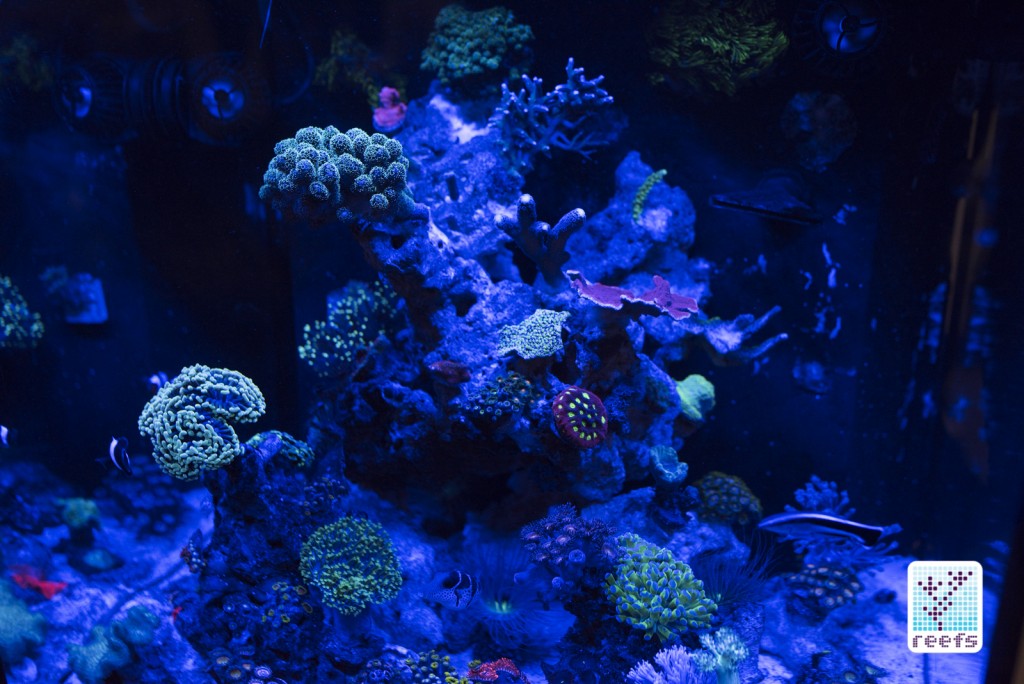 Fluval Marine and Reef 2.0 over author’s aquarium- Actinics only 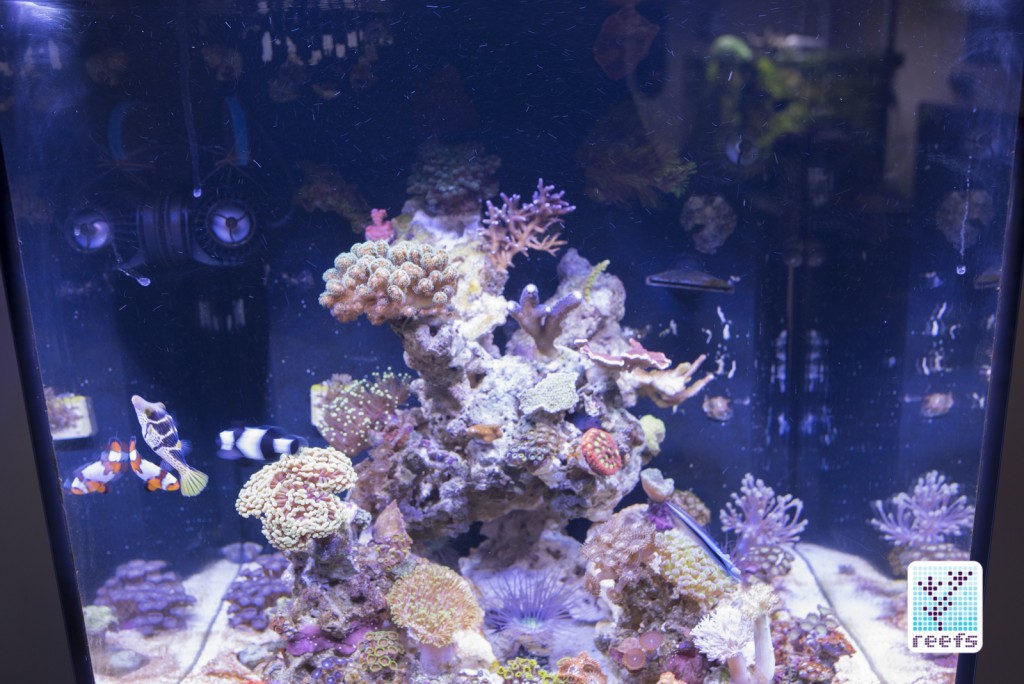 Fluval Marine and Reef 2.0 over author’s aquarium- all diodes ON

Fluval Marine & Reef 2.0 PAR ratings (as advertised by the manufacturer) are as follows:

These are not incredibly impressive PAR readings, but their output is enough to grow soft corals and some less light-demanding LPS species. 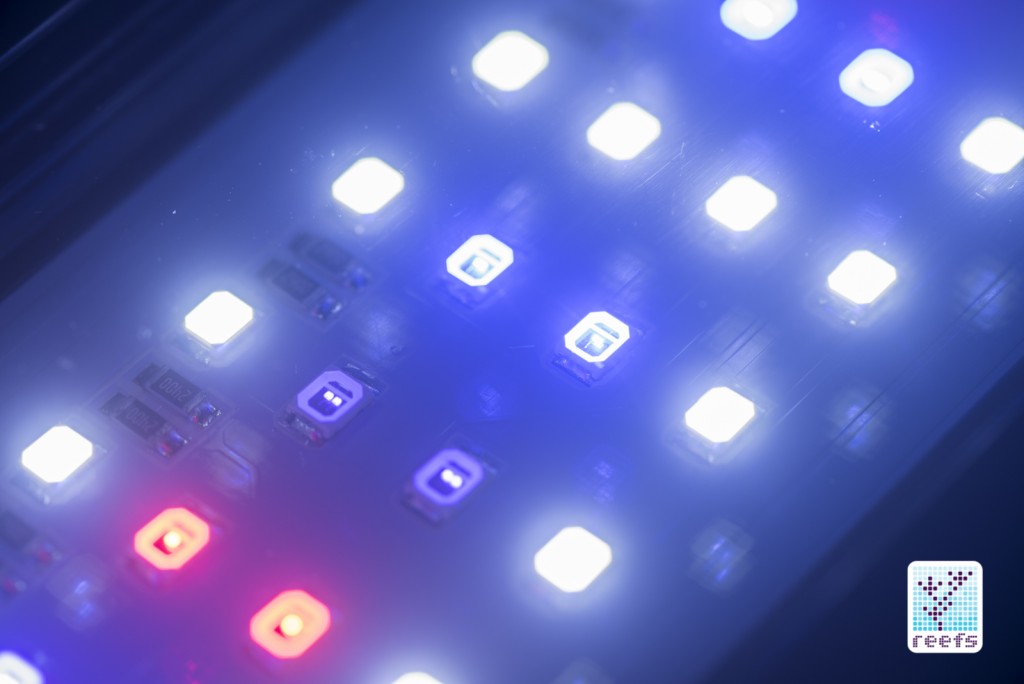 This is a high-quality product; both the main body (which is essentially one long radiator seamlessly fused with a plastic case) and the expandable legs are solid and blend nicely with the aquarium frame. The LED cluster is protected with a sealed glass panel that is easy to clean and traps some of the heat that would otherwise transfer to the aquarium water. Speaking of heat, the light utilizes passive cooling (no fans), but, with its low wattage and its SMD emitters, the radiator only warm with prolonged use, never hot. 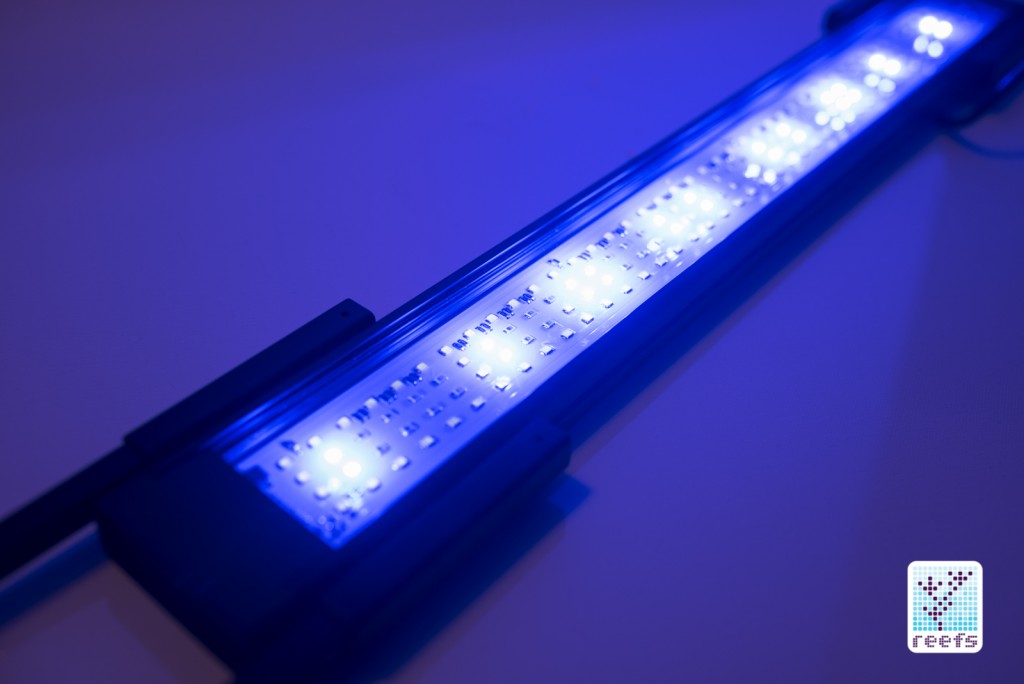 Marine & Reef 2.0 could be considered a solid replacement for the previous generation of Fluval strip lights. It has several different blue emitters, two channels of control, a clean design, waterproof casing, extendable legs, and a relatively low price. I feel that the power button could be designed better, and I still haven’t received word as to when the WiFi module will become available, but it is a very attractive product.

Possibly the world’s most advanced and sexy home aquaponics system