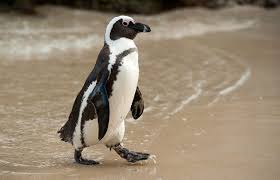 The Mystic Aquarium features a colony of 28 resident African Penguins, one of the largest populations in the United States. Currently, African Penguins are endangered; in the wild, they are only found on the south western coast of Africa, and it is estimated that there are less than 50,000 penguins world wide. 1100 of those penguins reside in zoos and aquariums. In the last ten years alone, the African Penguin population has decreased by 50 percent, most likely due to food shortages based on the increase of commercial fisheries and general human disturbances. With the decline of the population, the penguins are even more susceptible to events such as bad weather. That is why the health of the Aquarium’s penguins is so important. Recently, a cancerous tumor was found on one of the aquariums residents penguins, but after treatment by Mystic Aquarium veterinarians with radiation, the penguin is doing well and appears to be in full remission. Aquarium veterinarians plan to discuss the treatment of the penguin with other individuals in the field, assuming the penguin’s health continues the thrive. The Mystic Aquarium has its own research department and on site laboratory, that focuses on the health of marine animals. The Mystic Aquarium is a founding member of the African penguin Species Survival Plan (SSP) through the Association of Zoos and Aquariums (AZA). The Aquarium has also discussed African Penguin research initiatives with South African Penguins and is committed to promoting the conservation of these endangered animals.