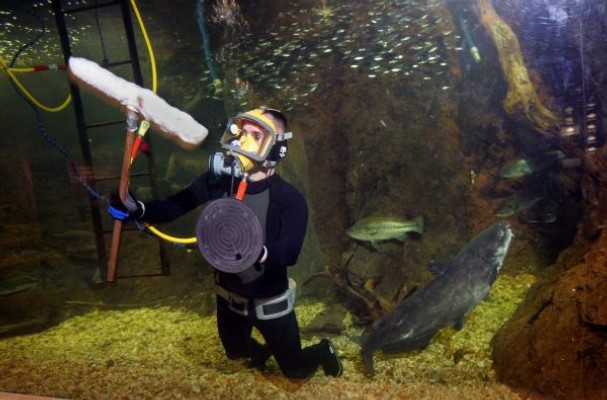 Working in a public aquarium for ten years myself, I know first hand the trials and tribulations that staffers go through in keeping the tanks spotless. It is certainly not as easy as it looks and takes a lot of dedication and hard work. The National Aquarium has 2.2 millions gallons of water, and a lot of marine animals. That means that there is also a lot of refuge, uneaten food and other unmentionables in those tanks that need cleaning too.  Bacteria and algae can run wild if left alone for even a couple of days. That takes a toll not only on the beauty of the tank but more importantly, of the health of its residents. “It is a major undertaking to not only keep the exhibits clean, but to keep the animals healthy,” said Jay Bradley, curator of fishes at the National Aquarium. “It does depend on the exhibit how often things are done, but there’s something being worked on every day.” Divers clean the over 3000 pieces of artificial coral in the tank daily, as well as keeping the tanks algae free, while swimming around some big fish and sharks. The aquarium also depends on the help of a team of 950 volunteer divers, who donate their time to cleaning the tanks. I spent  much of my time when I was at the public aquarium in a dive suit cleaning the tanks. It is a very important, and often times not well loved job, but someone has to do it and for good reason. MORE