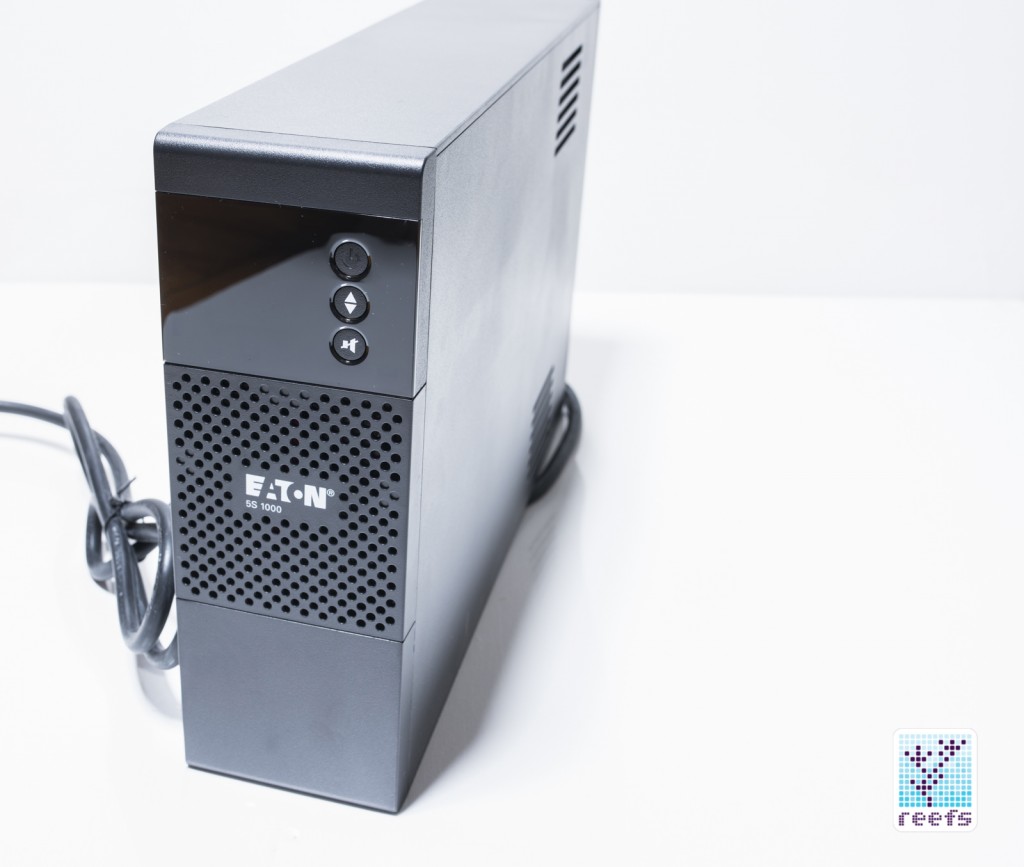 Power outages. Aquarists’ worst nightmare, these unpredictable events are often responsible for catastrophic tank crashes and loss of inhabitants in our home aquariums. Power interruptions can wipe out years of carefully-nurtured reef tank ecosystems in a matter of hours. In a grim reality of changing climate, less and less places are spared from the unforgiving power of Nature. Even where I live, in the relatively safe Northeastern part of the United States, rogue weather can knock out power lines and leave households without electricity for days at a time- as we witnessed in the aftermath of 2012 Hurricane Sandy, one of the costliest natural disasters in recent history.

There is nothing we can do to prevent these events, but we can protect ourselves and our tanks from temporary power disruptions with uninterruptible power supply (UPS) devices. Surprisingly, the aquarium industry does not offer a great choice of such equipment and the few that are designed specifically for an aquarists in mind are often overpriced and/or lacking in the amount of emergency power they can store. For those reasons, aquarists sometimes have to “cross the border” and look outside the hobby for solutions to this problem.  One such product, which falls into the computer hardware category, is the subject of today’s in-depth review- the 5S1000LCD UPS from EatON Corporation.

Since I am working in a residential construction industry, the name EatON isn’t unfamiliar. Quite the contrary; the company is known for quality electrical components, producing a variety of items from main log panels to circuit breakers and various connectors for use in home electrical systems. EatON also offers solutions and products for the aerospace, hydraulics, hybrid power, automotive, and filtration industries.

WHAT IS A UPS? 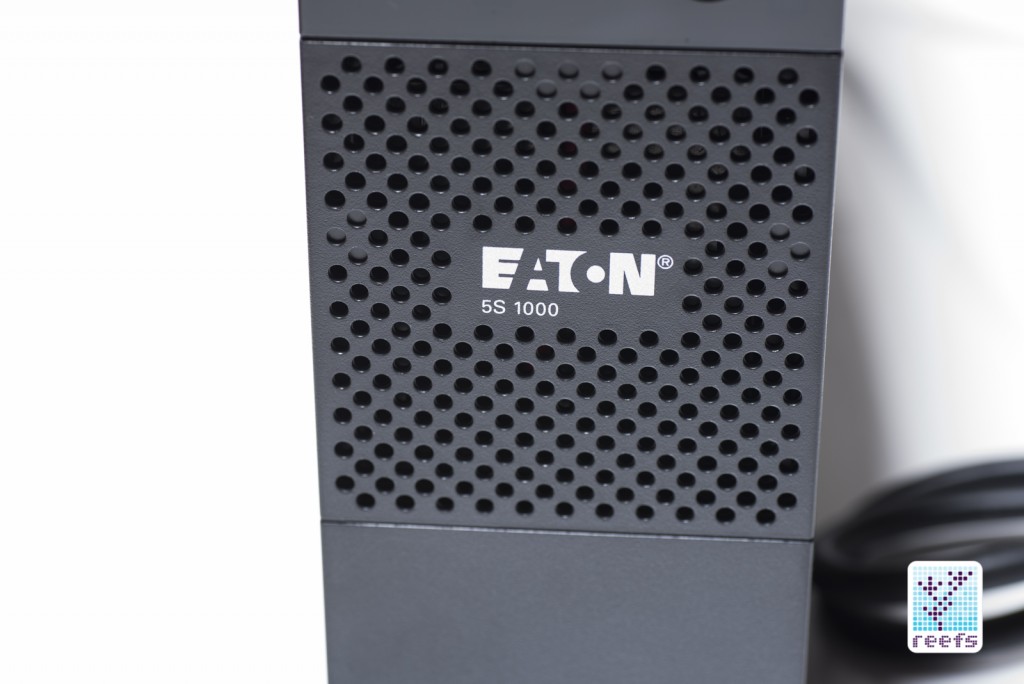 Uninterruptible power supplies are devices designed to provide emergency AC power to other equipment in instances of power disruptions in the electrical grid. In plain English, they are essentially a big rechargeable battery that keeps devices running temporarily until power is restored or until they exhaust their storage capacity, whichever comes first. They are used mainly in home & office computer networks to protect from data loss due to unexpected electrical outages. UPSs are the best insurance against data loss in situations where gas-powered generators cannot be installed. Brands and models differ in the amount of equipment they can handle (identified by the VA rating ) and also by the extra features they have, such as surge protection, integration with computer’s operating system, and the total number of outlets they have.

The VA rating of a UPS is its most important characteristic and is used interchangeably with its Wattage rating when the product is advertised. The VA number corresponds to the total load a given UPS can handle. For example, the unit I received for testing has a VA rating of 1000 or 600W, which means you can safely plug in equipment that draws up to 600W of power. To put it simply, the larger the number, the more equipment a UPS can support. As the VA rating increases, so does the size of battery and the weight of the unit. There are no shortcuts here- if you want your equipment to last longer during outage, you need to go with a larger UPS.

EatON 5S series comes in three configurations- the smallest 700VA, a mid range 1000VA and the largest of the three- a 1500VA model. The 1000VA unit I received for this this review has the following specs:

So far, an UPS description doesn’t sound like it would have much in common with a glass tank full of water, but hey, it’s still a battery pack in its essence and therefore can be used as an emergency backup power. Since this is a reefkeeping blog, I’m going to test it as one and see how well does it perform in the simulated power outage, but first, let’s get into unboxing. 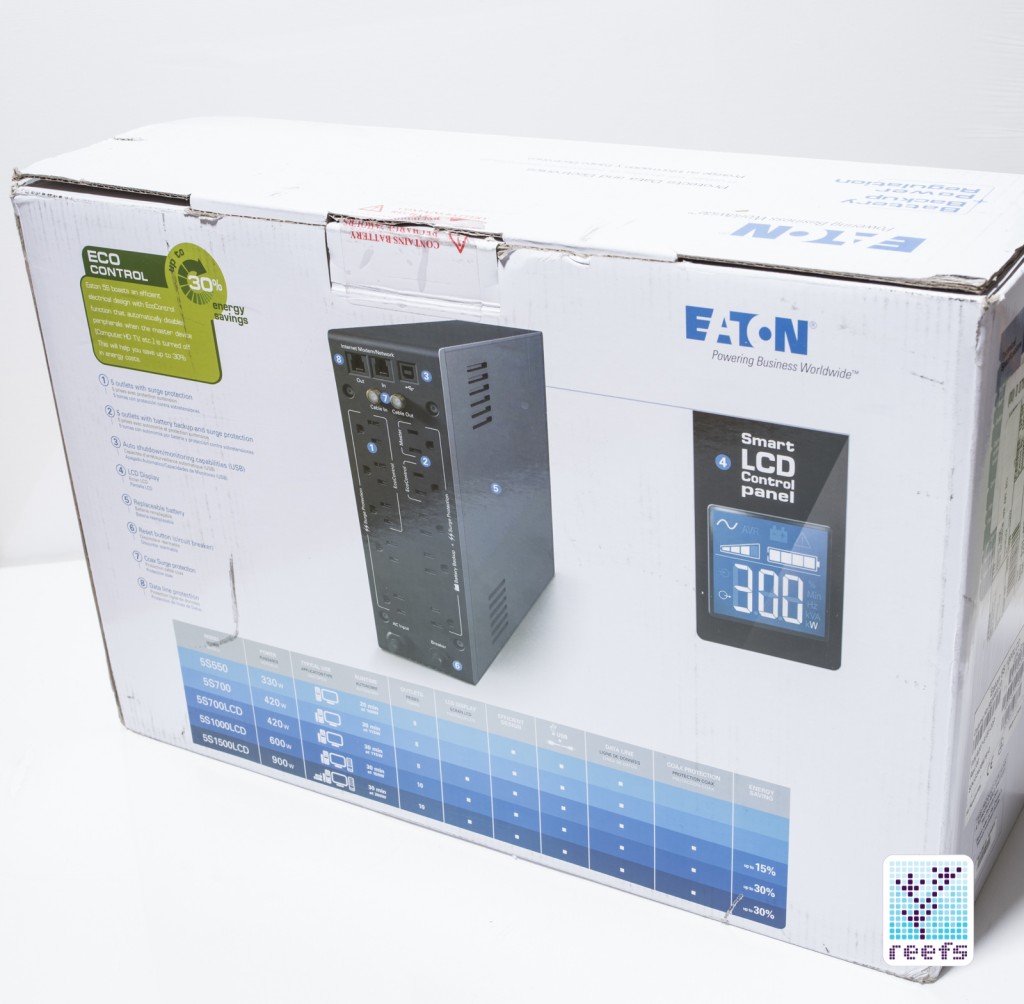 EatON 5S1000LCD UPS comes in a cardboard box, protected by a Styrofoam insert. Inside it, the unit itself and a printed installation manual. When I removed the UPS from its box, I quickly experience one of the downsides- it’s quite heavy (for aquarium equipment standards). Weighing over 21 lbs. (almost 10 kg), with dimensions of 15” long x 3-1/2” wide x 10” tall, it is the size of game console or four cereal boxes stacked in two rows- two columns  configuration. To be fair, that cannot be taken as a disadvantage when compared to other devices in the category, because they all are bulky, mainly due to the large capacity batteries and fans that keep their internal temperature in check. In fact, EatON 5S is quite compact when stacked against similar units. 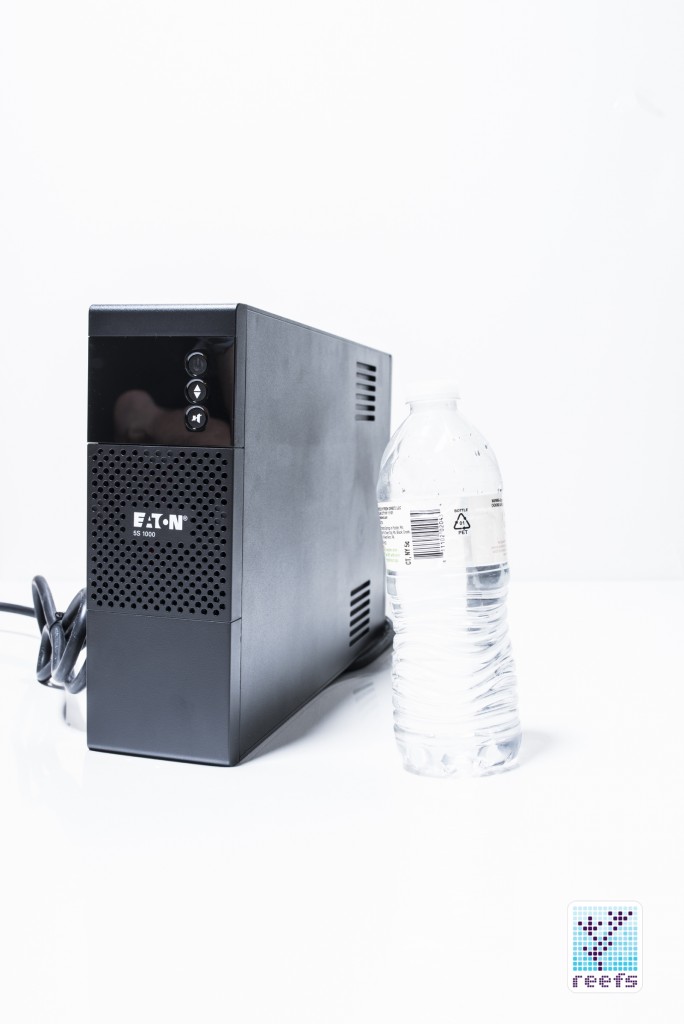 On the other hand, the simplistic design and use of quality materials makes this UPS “disappear” amongst other equipment residing near a fish tank. EatON 5S is simply a rectangular shaped steel box powder-coated in uniform black matte finish, with a small LCD screen, three physical buttons, blended seamlessly ventilation grid and EatON logo in front. 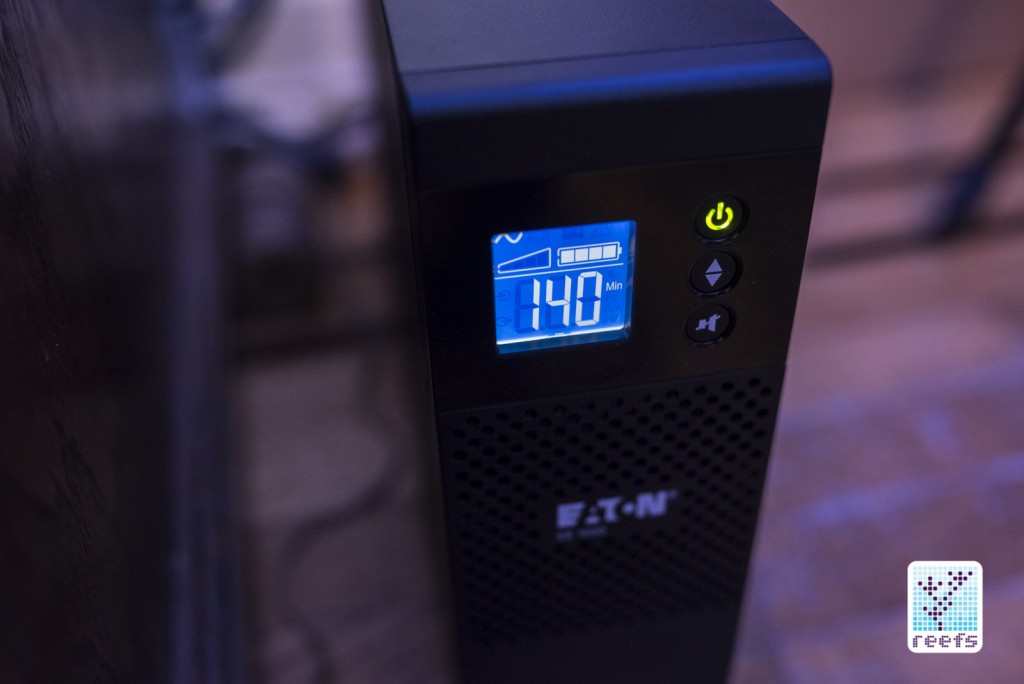 The back of the unit is much more “crowded” – it has 10 outlets with surge protection, 5 of which are battery-backup enabled. Two outlets (one on each side) are positioned away from the rest to accommodate larger plugs (think AC/DC power supplies with built-in plug). 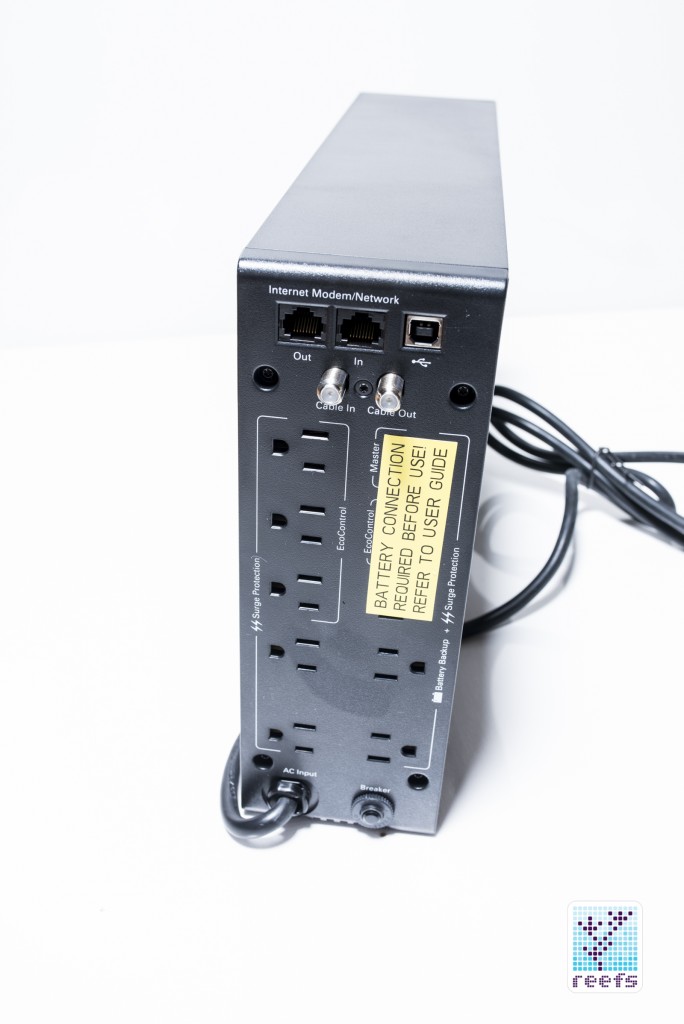 In addition, there are Ethernet IN/OUT sockets for data line protection (can be used to protect Ethernet cable that feeds aquarium controller such as Neptune Systems apex Aquacontroller) and Coaxial Cable IN/OUT duo for cable modem surge protection. On the bottom of the unit is a 10A reset-able fuse and a 6 foot (2 meter) cable with three-pronged plug to connect to the electrical grid. 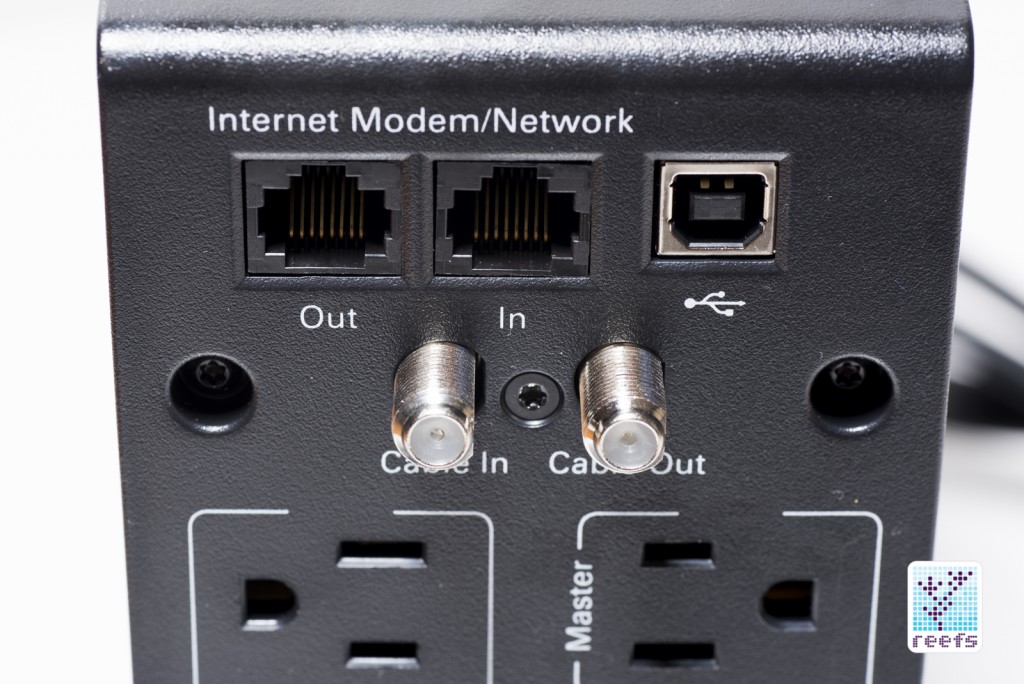 Close up on the Eaton 5s back cover

INSTALLATION AND FIRST TIME USE

Before using, the supplied batteries need to be plugged into the UPS. To do that, the front cover just below the EatON logo slides out, exposing two 12V accumulators that provide emergency power during outages. At this point, the user can simply connect the battery plug to the UPS body; I took the battery out to demonstrate what stores all that extra “juice” that keeps stuff running when the power’s out. Unsurprisingly, when battery is removed from the UPS, the former instantly loses most of its weight. The two 12V lead acid batteries (similar to those used in emergency exit signs and fire alarm systems) can and should be replaced every 4 years to keep the unit working properly. 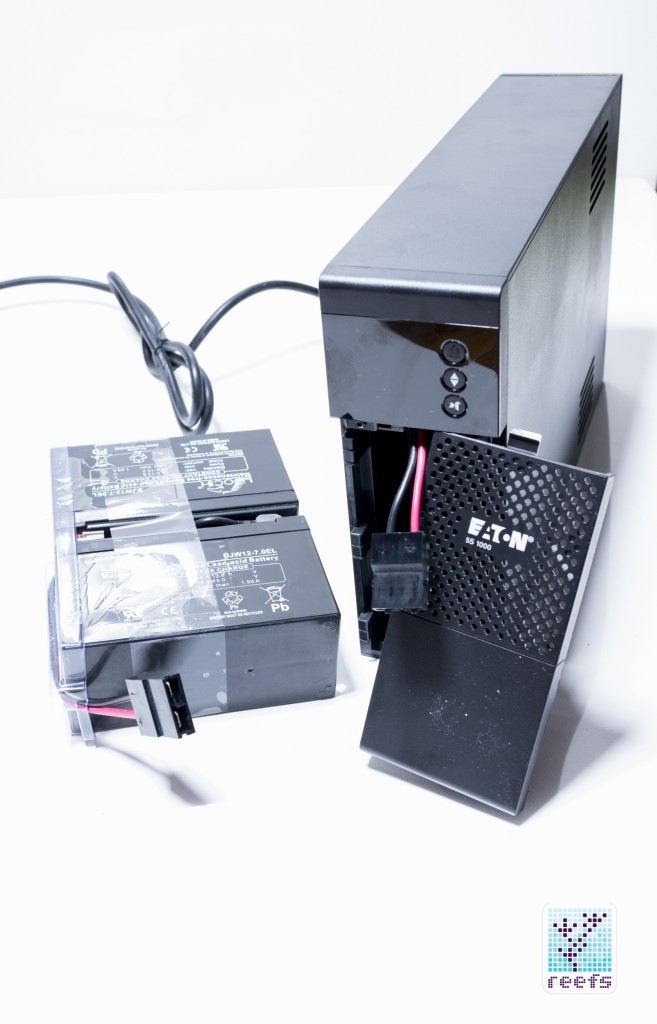 I placed the battery pack back inside the EatON 5S, connected the cable, slipped  the cover back on and plugged the whole thing into the wall outlet- at this point, the UPS was ready to use. 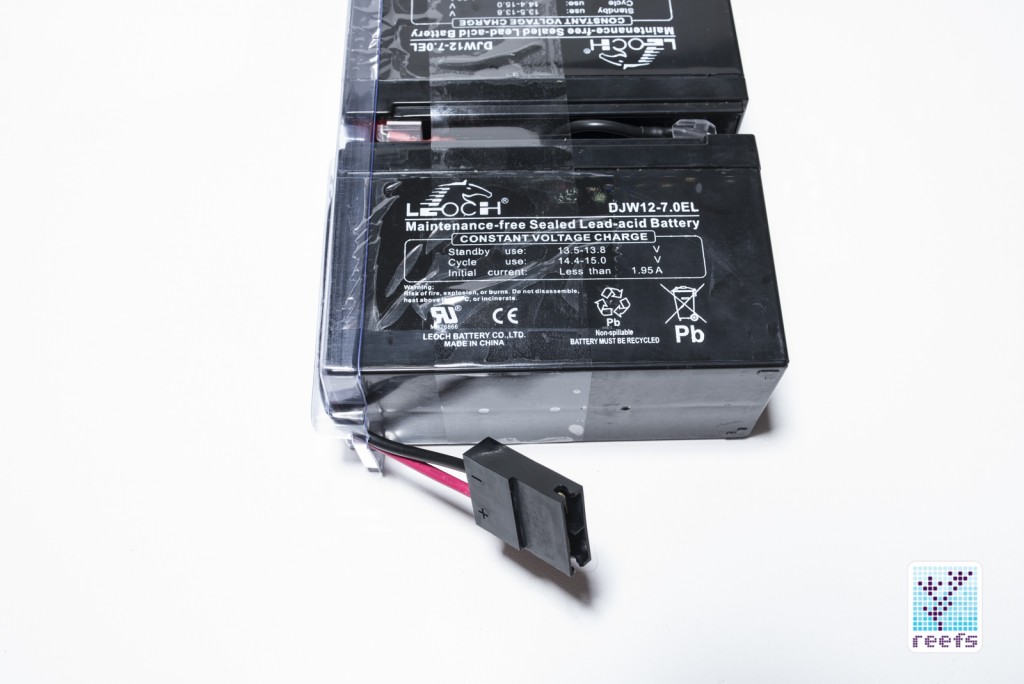 At the most basic level (using the EatON 5S without the USB connection to the computer), the setup and operation of the device is very straight-forward. You can plug up to 5 devices to the battery backup outlets plus 5 more that will shut down if the power goes out. In addition, the EatON UPS features a Eco-control function; when enabled (it is disabled as default), the top outlet on the “battery backup” side becomes a master outlet and four of the remaining nine outlets (one on the “battery backup” side and 3 on the opposite side) act as “slave” receptacles. When the device that is plugged into the master outlet (in most cases a computer) shuts down, all the Eco-control outlets turn off with it. It’s a neat feature, though not as useful in an aquarium setting, unless you don’t use an aquarium controller and want to shut down a bunch of equipment all at once (when doing tank maintenance, for example).

Eaton offers a free, downloadable application called Eaton UPS Companion (available for Windows, Unix and MacOS machines) that accompanies the UPS and further enhances its functions. Eaton ships the UPS with an USB cable to pair it with the computer, and it needs to stay physically connected to access the app. The software allows you to monitor the battery capacity, current output load, and even (after typing in your electricity costs) calculates energy consumption. In addition, there is a log of events where you can check for power interruptions, as well as a separate menu for configuring shutdown criteria. In summary, the app is a functional and easy to use piece of software, the only drawback is that you need to have a physical connection with a computer to use it.

For the purpose of this review, I conducted a series of tests simulating three different emergency configurations, varying from each other by the amount of equipment running on a UPS battery backup in situation where power is cut from the grid. I labeled them as follows : 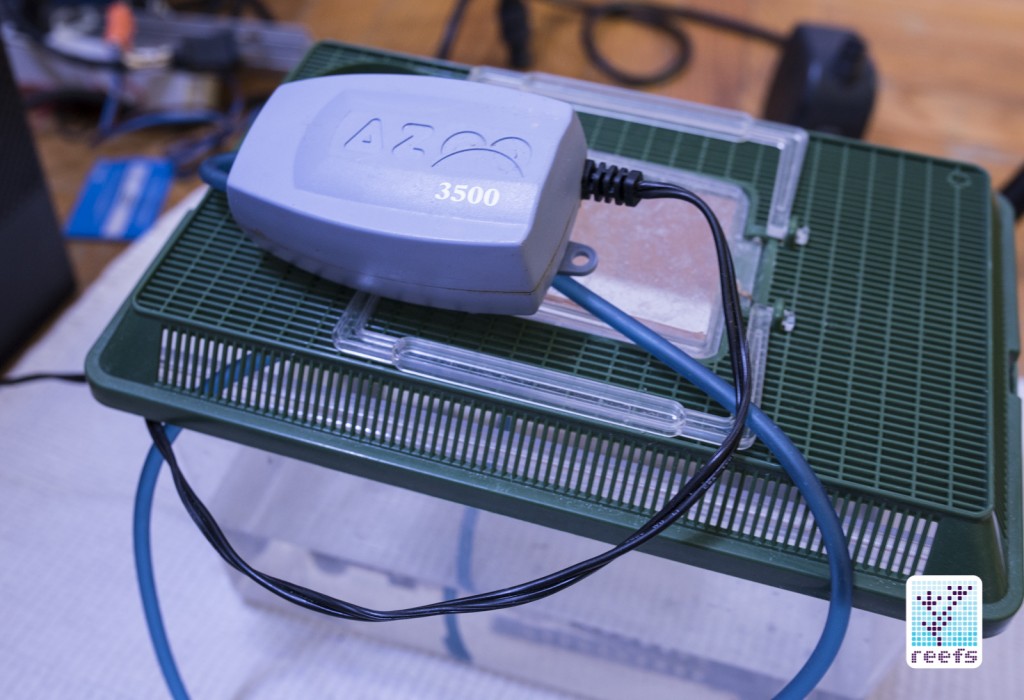 The “testing tank” for minimal scenario 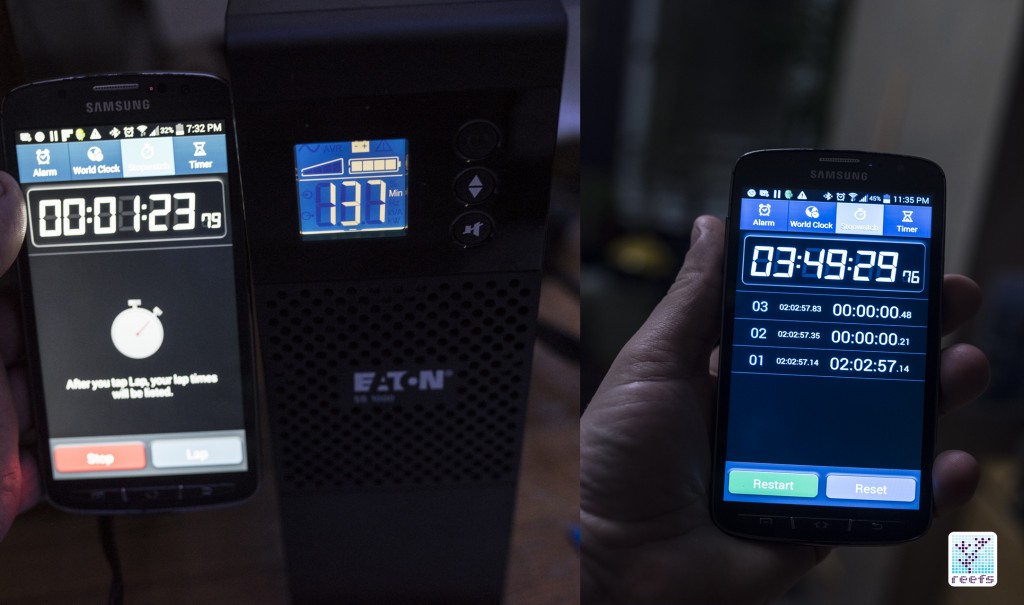 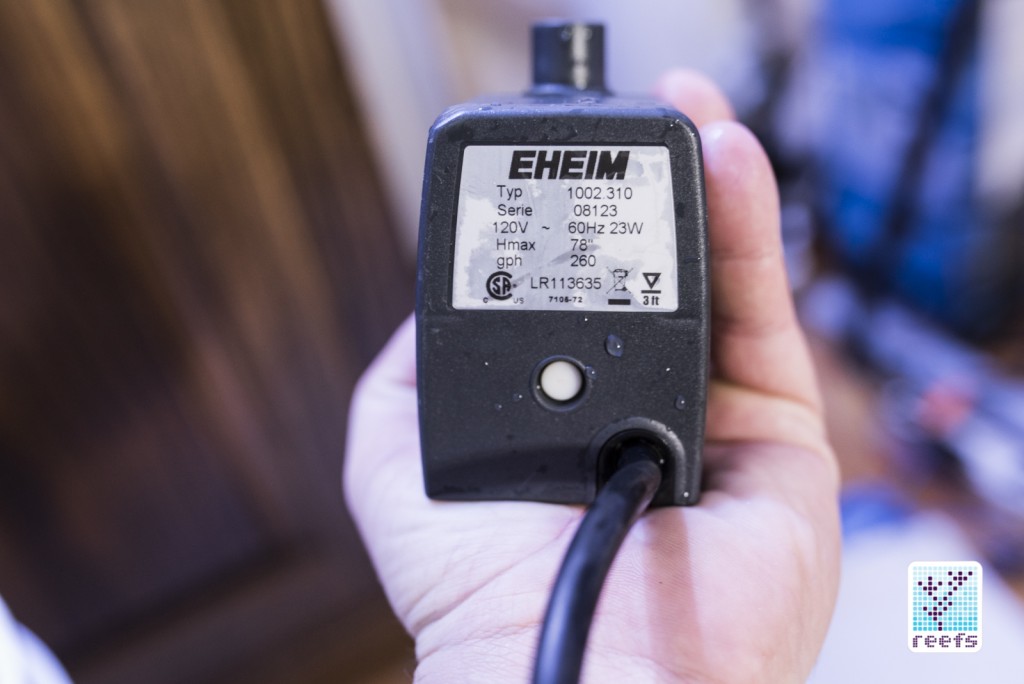 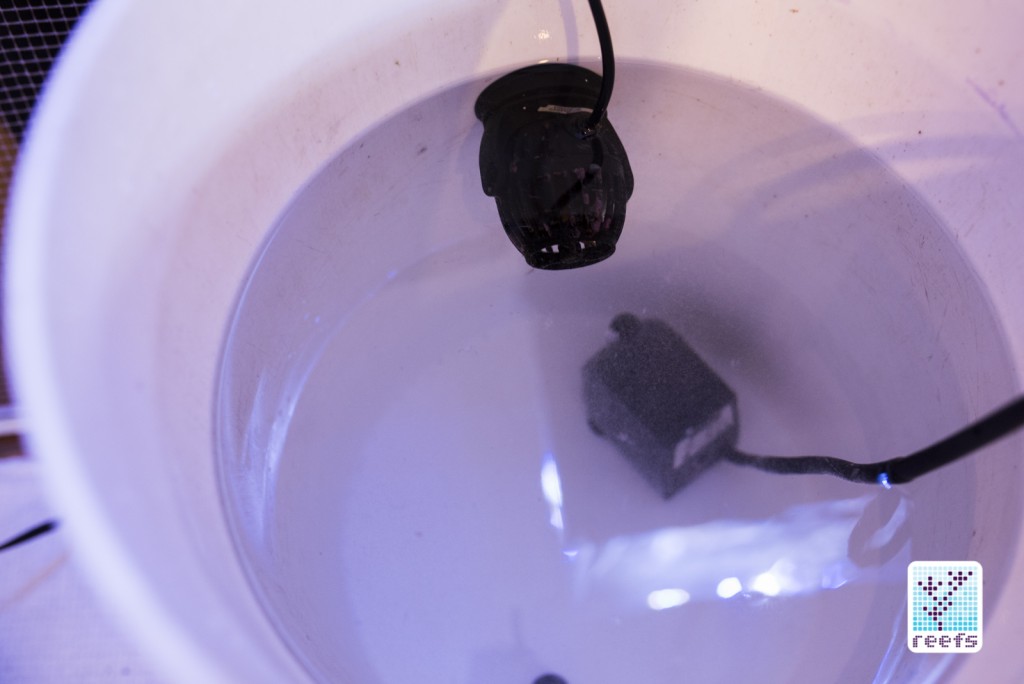 Information displayed on UPS screen during the test 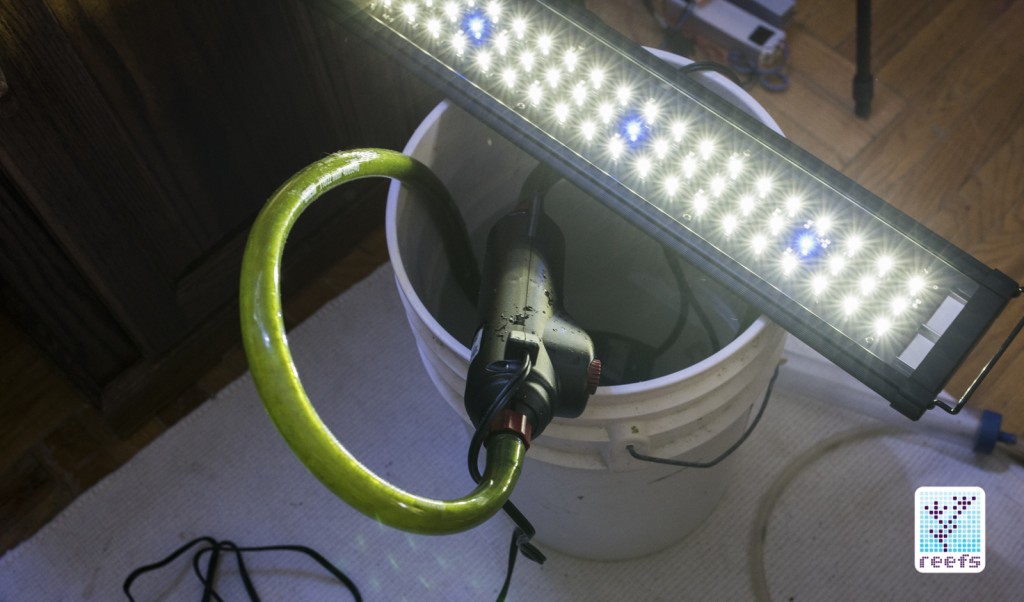 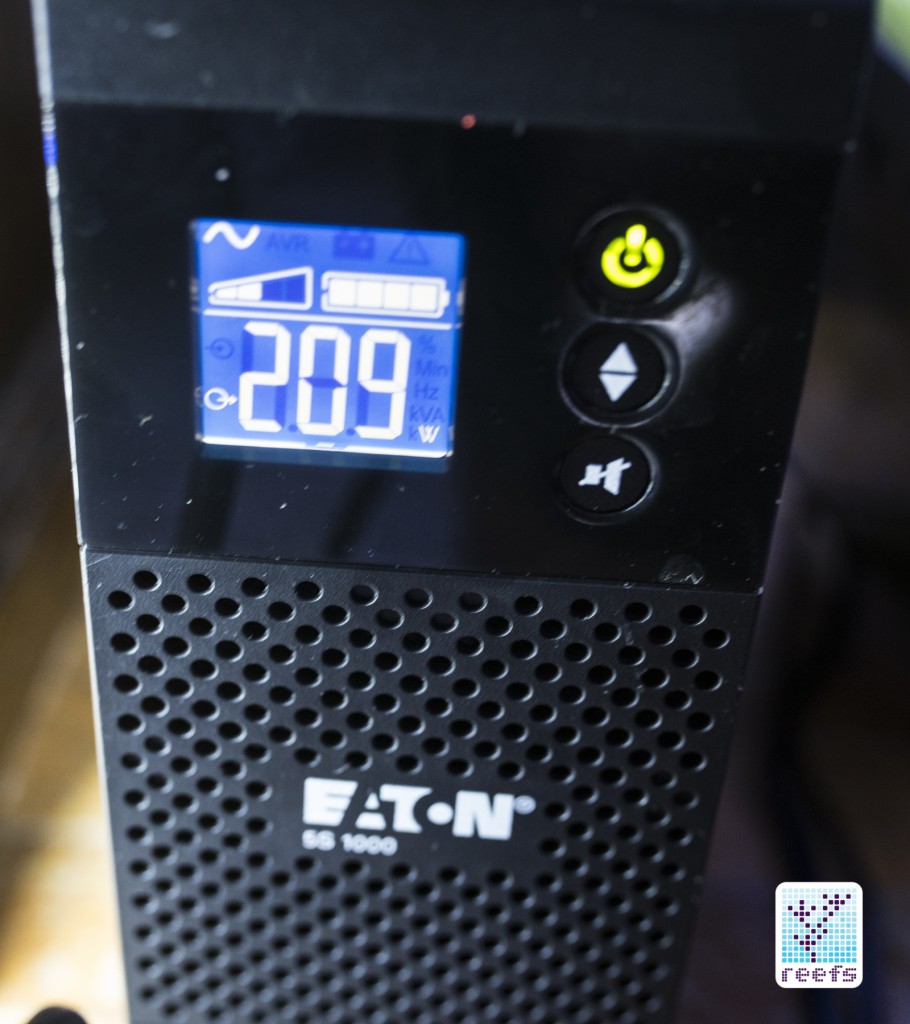 There are few conclusions I drew from running these tests. First of all, I was quite impressed with the amount of time the Eaton UPS can support a tank running two pumps. With the combined turnover of about 1000 gph (2800 lph), these two would provide enough emergency flow for tanks much larger than my 30g cube. Secondly, the running time displayed on the 5S LCD screen is very conservative and the UPS provided power for much longer than the estimate; even with a full tank support, the actual running time was almost twice as long as the estimated 15 minutes. The wattage calculation displayed on the LCD screen is very accurate, but it seems to have a minimum draw, beyond which it will not display current wattage (as was in the case of a single air pump). The only weird thing was the small difference in running time between an air pump and an “adequate” scenario- it may be that the air pump’s advertised wattage was inaccurate… 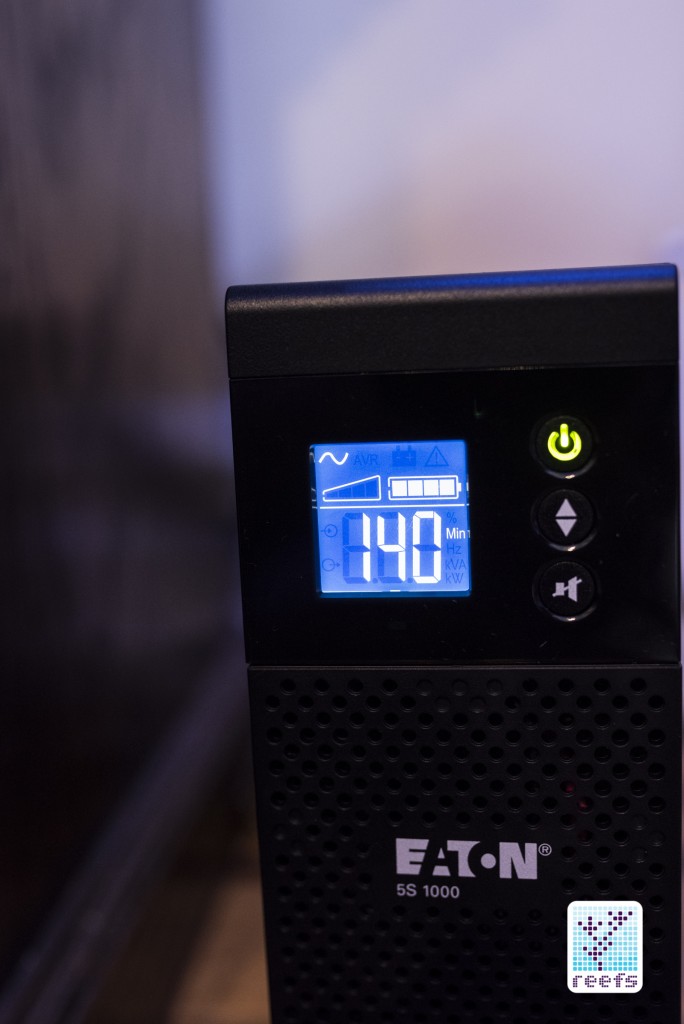 EatON 5S1000LCD UPS is a great investment that can save a reef tank when power goes out. Even though the product is not marketed for our hobby, it can be adapted for one’s aquarium with ease. It’s a good thing that a well known company from outside the hobby seeks interest in their products and hopefully, a sign of things to come. Who knows, maybe one day Eaton will produce a UPS dedicated to aquarium use; one that would have a built in wi-fi, remotely operable outlets, and an alert system to inform users of a power outtage via text message or an e-mail.

Meanwhile, if you’re looking to safe proof your fish tank investment, take a look at Eaton 5S series of UPS devices as they offer a lot of functionality in a compact, good-looking package.