Marine biologists often rely on underwater robotic rovers to gather organisms from deep-water environments, but robotic arms can be clunky and destructive. National Geographic Explorers David Gruber and Robert Wood teamed up to create “squishy fingers”: soft, robotic grippers for collecting fragile deep-sea organisms. In this expedition they travel to the northern Red Sea to test the new robotic hands.

National Geographic Explorers David Gruber and Robert Wood have just announced a promising new development in the fields of marine biology and robotics. Dubbed “squishy robot fingers”, the team, aided by mechanical engineer Kevin Galloway, has designed and constructed a set of remotely-operated soft robotic grippers for collecting delicate corals and animals that live too far beneath the ocean’s surface for human divers to harvest by hand.

Until now, scientists who wished to collect deep-water organisms have had to rely on remotely operated vehicles (ROVs) to gather the samples. The problem, though, is that the standard-issue robotic “hands” of underwater ROVs are ill-suited to collecting delicate coral, sponge, and other samples because the equipment was designed for undersea construction and to install and repair submerged pipelines. 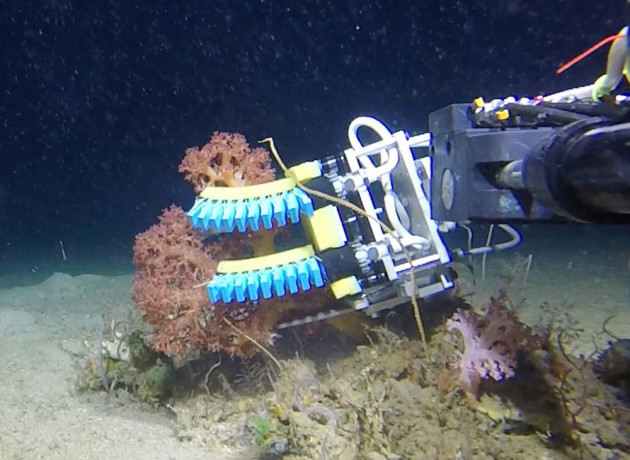 As Harvard engineer Robert Wood states, “They were using rigid Jaws of Life-type grippers designed for the oil and gas industry that were totally overpowered and were destroying things. It immediately clicked that there was a soft robotics solution that may be viable.”

The new grippers are operated from a single hydraulic source, are lined with memory foam, and function in two different ways: a boa-type gripper can coil around long and narrow specimens that extended vertically from the sea floor, while a set of four bellows-type actuators act as two sets of pincers, and gently close around the specimen without causing any damage.

The team has just successfully completed its pilot study in the Gulf of Eilat in the northern Red Sea, collecting an extremely delicate red soft coral (Dendronephthya sp.) without damaging any of its branches.

The full abstract can be found HERE