Lizardfish in the Sand 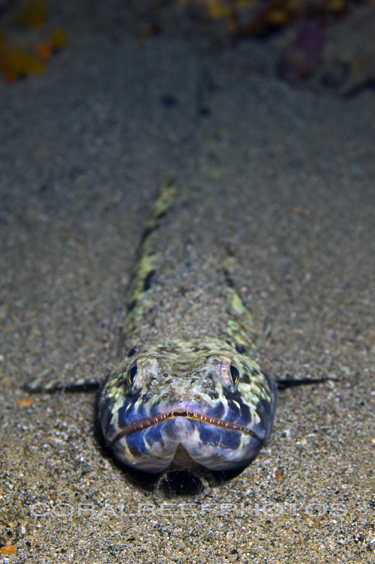 I have a very colorful Lizardfish for you all today that I found partially buried in the sand waiting for some poor unsuspecting prey to pass by. This is usually the way I see them, though some of the time they are completely buried, with only their eyes and mouth sticking out of the sand.

Lizardfishes are generally small, though the largest species measures about 60 cm (24 in) in length. They have slender, somewhat cylindrical bodies, and heads that superficially resemble those of lizards. The dorsal fin is located in the middle of the back, and is accompanied by a small adipose fin placed closer to the tail. They have mouths full of sharp teeth, even on the tongue.

Lizardfishes are benthic animals that live in shallow coastal waters; even the deepest-dwelling species of lizardfish live in waters no more than 400 m (1,300 ft) deep. Some species in the subfamily Harpadontinae live in brackish estuaries. They prefer sandy environments, and typically have body colors that help to camouflage them in such environments.

The larvae of lizardfishes are free-swimming. They are distinguished by the presence of black blotches in their guts, clearly visible through their transparent, scaleless, skin.

Have a wonderful day out there…. MORE