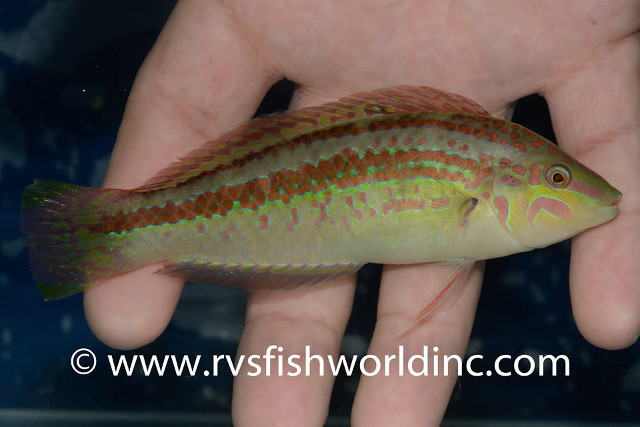 [UPDATE: This post originally misidentified this fish as Halichoeres nigrescens. Dr. Benjamin Victor has informed me that this is actually a green variant of a closely related species, Halichoeres bicolor.]

Oftentimes, a species’ abundance in the wild doesn’t necessarily translate to its abundance in the aquarium trade—for instance, Halichoeres bicolor. Despite being an abundant fish in nearshore, weedy habitats, this hearty and attractive wrasse is almost entirely ignored by the fishkeeping community. Thankfully, the fine folks at RVS Fishworld have procured a stunning male specimen illustrating the full aesthetic potential this wrasse has to offer.

Common names for this fish include the “Pearly-spotted Wrasse” and “Brown Stripe Wrasse”. Halichoeres bicolor is easily mistaken for another drab relative from weedy habitats, H. nigrescens. There has been a tremendous amount of taxonomic confusion surrounding the true identity of that fish, as quite a few superficially similar species share its red and green patterning. It can be quite challenging remembering them all, which is why I created an identification guide to help in diagnosing this group (though the species I discuss here is unfortunately absent). Adding to the confusion is the uncertainty as to whether H. nigrescens, which ranges from the African coastline through the West Pacific, is truly a single species or a pair of geminate sister taxa split into Indian Ocean and Pacific populations. In the latter scenario, H. dussumieri is the correct nomenclature for those found in the Indian Ocean. This awaits genetic confirmation, but be aware that both names are widely in use by various authors.

This is H. nigrescens. Note the considerable similarity to H. bicolor. Credit: ぶー

Identification of Halichoeres bicolor can be challenging, as it is rather nondescript for its genus and remarkably variable in appearance based on the age, sex and even the type habitat it is found in. Males and females possess separate patterns. Females and juveniles are typically white or beige in color (though specimens from weedier habitats may be somewhat greener), with a thin dark stripe running along the midline of the body and a small black spot on the leading edge of the dorsal fin. As they mature into the male sex, the spot in the dorsal fin disappears and is replaced by a larger marking at the 6th spine. A recognizable set of red markings develops behind the eye, consisting of a short vertical bar and two horizontal stripes that create the appearance of an equal sign ( = ). The dark midbody stripe of its youth also fades, becoming redder and wider, often with green scales dotting the midline. Additional linear patterns of red scales appear above this, though their precise manifestation can be somewhat variable.

Halichoeres nigrescens is easily confused with Halichoeres bicolor. Note the odd red marking behind the eye and the dark crosslinks running along the length of the body. These are said to be the most abundant wrasse in weedy coastal habitats of Hong Kong. Credit: 釣り太郎 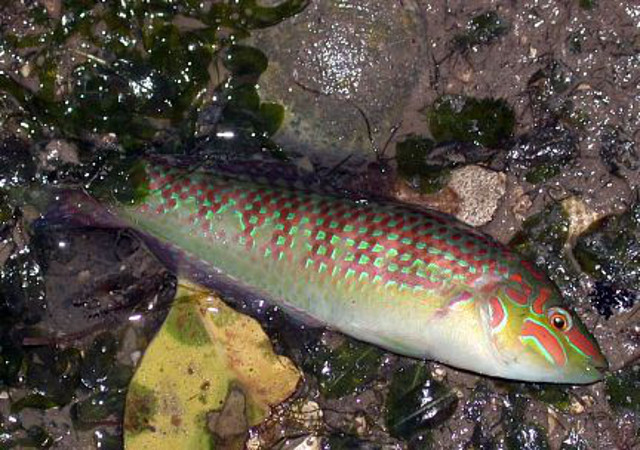 This specimen illustrates how variable the amount of red can be on the body. There are faint traces of the crosslink pattern commonly observed in male H. nigrescens, but the facial markings of this fish diagnose it as H. bicolor. Specimens have been widely reported form Singapore. Credit: Ria Tan

I think it’s safe to say that H. bicolor and its lookalike cousin H. nigrescens will never be a hugely popular fish. This is likely to be the kind of oddball piscine that finds itself sitting in an aquarium store for months before finally being sold at a discounted price. There are simply too many other wrasses that outshine it when it comes to attractiveness. How many reefkeepers are there that would willingly take this species over a more vibrant relative, such as the Christmas Wrasse (H. ornatissimus) or a Melanurus Wrasse (H. melanurus)? This would, of course, be the perfect fish for all those aquarists setting up a weedy intertidal biotope… oh, what’s that, nobody ever does that. *sigh* And this is why you never see this wrasse available…