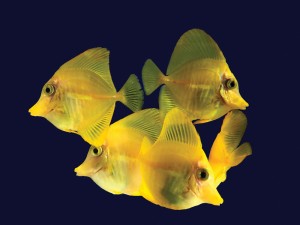 The captive bred Zebrasoma flavescens we’ve all been ogling over from the Oceanic Institute of Hawaii Pacific University have hit wholesalers Quality Marine and Segrest Farms. The initial shipments of 300-400 fish are almost all spoken for, heading to new homes at public aquariums.

This is a huge leap forward in the aquaculture world. Tangs are known to be one of the more difficult families of fishes to spawn, let alone rear. “Although this initial supply will be quite limited, we hope that as our research continues we will be able to provide more. Ultimately, our goal is that commercial suppliers will adopt this technology and provide significant numbers of captive-bred tangs to the industry.” said Chad Callan, the fearless leader of the yellow tang project.

A quote from the article Coral Magazine posted (via reef2rainforest) notes the expected higher cost of these fish. If they become available to the industry we hope that consumers are willing to put a little extra money down at the counter. The last thing we want is another ORA Mandarin effect, where uninformed hobbyists opt out of a much better choice to save a few bucks. This curtails demands and halts continued efforts. We cannot deny the value of a healthy conditioned fish, particularly one that’s now been aquacultured for the first time. 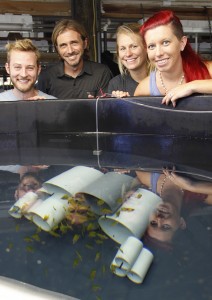 Chad went on to say, “I think it’s important to stress there are no guarantees…. This could be it for a long time, unless we get the support to carry on our research. And even then, we don’t know what to expect for numbers out the other side. There is so much still to learn!”

We wish Chad and everyone at Oceanic Institute of Hawaii Pacific University continued success with these wonderful animals.