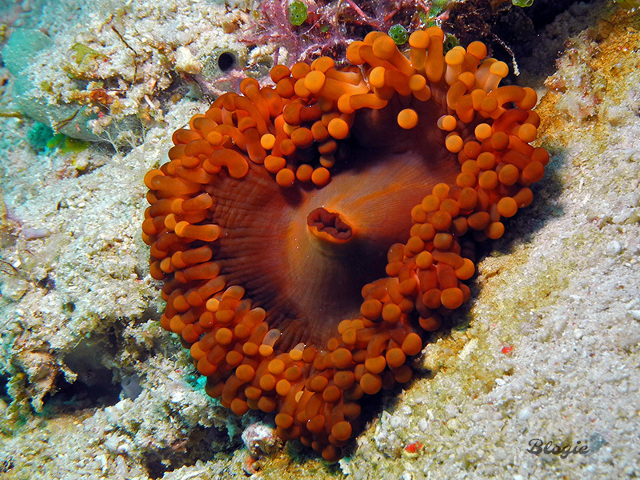 The morphological differences that serve to separate anemones, corals and corallimorphs (i.e. “mushrooms”) are not always obvious, and perhaps nowhere do the lines separating these groups blur so much as with a peculiar, tentacled beastie found in many reef aquariums: the so-called “Orange Ball Anemone”. These small, soft-bodied creatures normally hitchhike in alongside pieces of coral and proceed to go about their business buried deeply within the nooks and crannies of live rock. When finally they get noticed, they usually get mistaken for a pestiferous anemone, but, dear reader, this is no anemone… 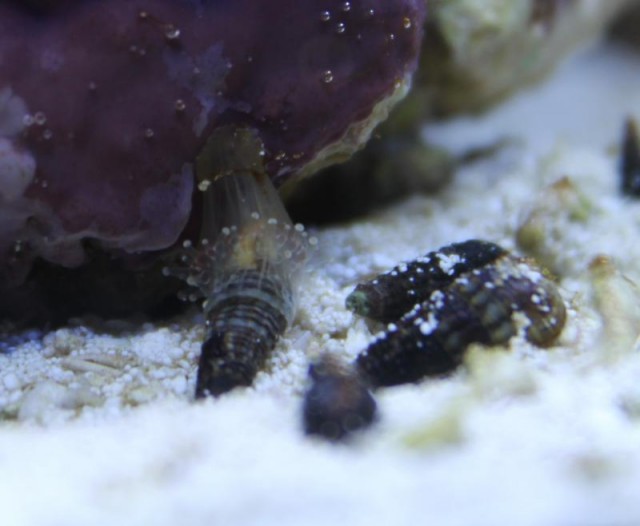 Corallimorphids are capable of causing some mischief in the reef aquarium, as can be seen by the pile of empty shells in this photo. Credit: gagonzalez

The Order Corallimorpharia, as I have expounded upon previously, is comprised of species that share with the stony corals (Order Scleractinia) a common configuration to their internal anatomy, as well as an identical array of nematocyst types; their only major morphological difference is the presence or absence of an internal calcium carbonate skeleton. The most familiar examples are the various genera of mushroom corals (e.g. Discosoma, Rhodactis, Ricordea) so ubiquitous in the aquarium hobby, all of which share a common gestalt—a flat, circular polyp with minimal tentacle development. Contrast this with the Family Corallimorphidae, whose members possess a more columnar shape with longer tentacles, and it’s easy to see where the confusion comes from. Externally, these really do look similar to the true anemones of the Order Actiniaria.

The classification within the Corallimorphidae is still poorly understood, as most species have been minimally studied, if at all. The namesake genus, Corallimorphus, has six species that are mostly restricted to deep waters, easily recognizable by their large size and stiff, non-retractile bodies. The remaining genera and species are, with few exceptions, smaller and able to fully retract their bodies when harassed.

Pseudocorynactis and Corynactis form the bulk of this family, with approximately 17 recognized species. Unfortunately, there is no consensus at the present time as to how these should be classified. Fautin 2011 chose to combine the two groups together as Corynactis, but other authors have continued to treat them separately, citing, among other subtle differences, a second layer of spirocysts in the acrospheres (the bulbous tentacle tips) of Pseudocorynactis, giving it a highly sticky feel. 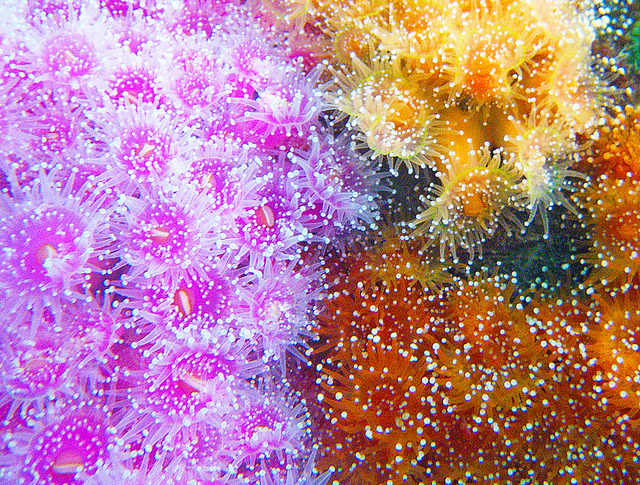 There may also be ecological differences between the two, as Corynactis is likely an entirely temperate water genus, with most of its recognized taxa forming a single widespread species complex. Due to the variable nature of these creatures and the limited morphological differences between them, much of the species level taxonomy is inferred: C. viridis (Northeastern Atlantic & Mediterranean), C. carnea (Eastern South America), C. chilensis (Western South America), C. delewarei (Northwestern Atlantic), C. annulata (South Africa), C. australis (Australia & New Zealand). There is also C. denhartogi from Tasmania and New Zealand, which is far larger (~4cm diameter) than the viridis Complex and appears to grow exclusively on the flexible skeletons of certain black corals and gorgonians in subtidal habitats.

The most widely encountered name in the aquarium hobby is the Caribbean Orange Ball Corallimorph Pseudocorynactis caribbeorum, but, oddly enough, actual aquarium specimens appear to be exceedingly rare (in fact, I’ve yet to see any). This large (~3cm diameter) and readily identifiable species is endemic to the Atlantic Ocean and was for a long time the only member of its genus. It can be recognized from its orange acrospheres and the usual presence of six dark bands spaced radially around the oral disc. While it could conceivably hitchhike in on cultured Floridean live rock, the vast majority of ball corallimorphs seen in aquariums are not this species, only misidentified as it.

Found this thing on my …. sigh…. dead aussie elegance coral. My clownfish were trying to host in the elegance coral and the coral didn’t respond well so i put it down stairs in my refugium under an LED light strip to see if it would bounce back.

Two other species have recently been placed in this genus, both likely to be widespread in the Indo-Pacific. The White Ring Corallimorph Pseudocorynactis globulifera appears to be a semi-common species in aquariums, though this identification is based solely on images published online by Dr. Jacob Dafni and needs morphological and genetic confirmation. Whatever this form represents, it can be recognized by: 1) a small size of around 1cm diameter. 2) acrospheres varying from white to pale orange. 3) a distinctive white patterning around the base of each tentacle and further white speckling radiating towards the stomodaeum (the “mouth”).

The presumed Indo-Pacific sister of P. caribbeorum is the recently described Pacific Orange Ball Corallimorph P. tuberculata. This species is reported at up to 3.8cm in diameter and has prominent tubercles present along the upper sides of the column. The authors use this latter feature to help differentiate it from its Atlantic counterpart, but, based on images included here, it appears that this feature can be found in both species on occasion. There are no confirmed live photographs of P. tuberculata, and the authors make no mention of its coloration in life, but specimens which are likely to be this species are shown here. The bright orange acrospheres are distinct from other Indo-Pacific species, and the oral disc is covered in a dull, glaucous patterning that fails to form distinct rings around the tentacle bases as in P. cf globulifera.

The Green Tentacled Corallimorph is the most commonly seen species in captivity. This small, fecund form is best diagnosed by the green fluorescence surrounding the tentacle bases and at the apex of each tentacle stalk. The color of the body varies from entirely or mostly clear to a more opaque orange or pink. It may be related to another small and gregarious species from the Atlantic, Corynactis parvula, which shares with this aquarium corallimorphid a propensity for vigorously reproducing asexually to form relatively dense colonies. Corynactis caboverdensis is said to be another related species, but is known from only a single 3mm specimen collected at the Cape Verde Islands off Northwestern Africa. Note that these latter two species are thought to belong in Pseudocorynactis, but this awaits a formal taxonomic revision.

The Red Reef Corallimorph is yet another small aquarium species, likely to be undescribed, which is quite similar to the preceding P. cf parvula but differs in having a much brighter pinkish-red coloration and lacking that species’ green fluorescence. This is probably the second most commonly seen form in captivity, and, while perhaps less prolific at reproducing in aquariums, it does seem to increase its numbers over time. More photographs are needed of this poorly documented creature.

Lastly, there is the Giant Reef Corallimorph Paracorynactis hoplites, inarguably the most impressive species in the family. It comes in a variety of contrasting shades of orange, brown and white and is capable of reaching at least 21cm in diameter (with some aquarists reporting it growing to a foot across!). This species has received a fair bit of study recently, as it has been found to prey heavily on sea stars, including the infamous coral pest Crown-of-Thorns Sea Star. 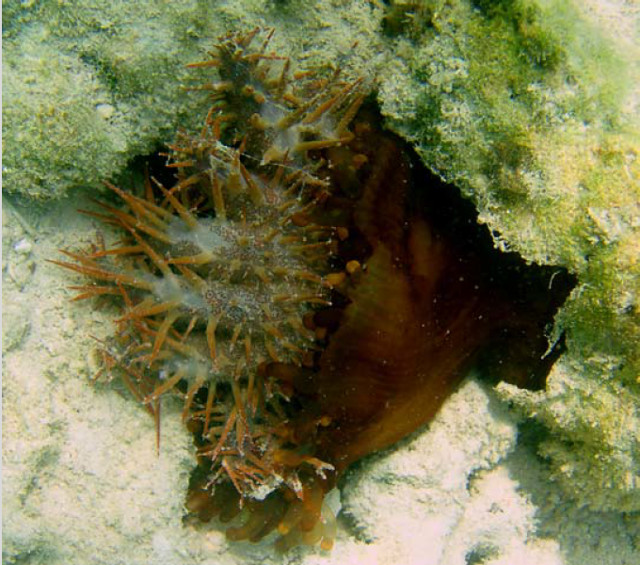 Specimens of P. hoplites are able to capture prey far larger than themselves thanks to their impressively sticky acrospheres, but, being incapable of consuming such large items whole, they instead feed upon a single arm until it is eventually detached by the escaping animal. Other species reported to be on the menu include Linckia laevigata, Choriaster granulatus and Protoreaster nodosus, as well as short-spined sea urchins such as Echinometra and Toxopneustes. Interestingly, brittle stars were ignored, as was a cowry offered as prey, though a nudibranch and sea cucumber were consumed when offered.

Aquarium specimens of P. hoplites have become sporadically available in recent years, often at relatively steep prices and trading under names such as “Orange Ball Anemone” (best reserved for P. caribbeorum & tuberulata) and “Chocolate Anemone” (also inaccurate, as this non-anemone isn’t made of chocolate). These are reported to be easy to keep but voraciously predatory, natch. The video above shows an entire table shrimp consumed whole, and most any other chopped meat will be greedily consumed. While this species is probably untrustworthy to keep with most fish, at least a few species have been observed to swim in or near its tentacles in the wild without harm, including the cardinalfishes Apogon multilineatus & nigrofasciatus, Cheilodipterus quinquelineatus and the gobies Trimma nasa and Eviota pellucida. 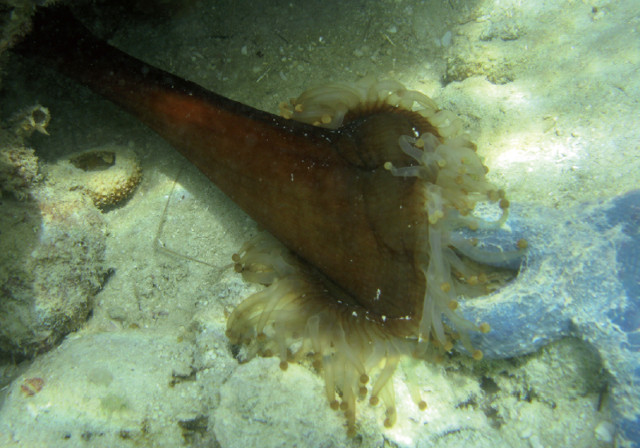 Obviously, there is a considerable amount of basic taxonomic work left to do on all these corallimorphids before we can accurately identify them. To aid in the recognition and discussion of these species, I have chosen in this article to create common names for each of these morphotypes with the hope that this will lend some clarity to accurately discussing them in the aquarium hobby. Aquarists are in a prime position to increase our understanding of these obscure and poorly known organisms by documenting the specimens which find their way into reef tanks. If you’ve read this far, how about taking a moment to search the dark corners of your live rock for Pseudocorynactis and maybe snap a photo or two?