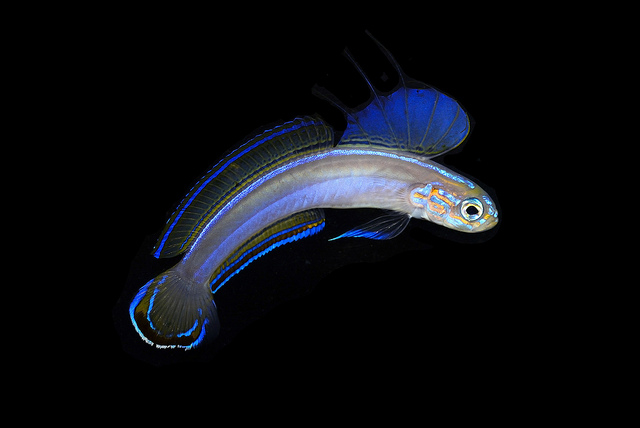 Of all the slender, slippery gobioid looking fishes to exist, few can surpass the unearthly and celestial beauty of Ptereleotris. The genus, of course, is home to numerous species, but three of them stand out in terms of their bind-blowing beauty, second to none. That being said, it is important to note that Ptereleotris, although slender and very goby like, are not gobies. They belong to the family Microdesmidae, which contains the two subfamilies Ptereleotrinae (dartfishes) and Microdesminae (wormfishes). In the aquarium context, much of this family is represented by the members in the former group, which contain the familiar genera Aioliops, Parioglossus, Ptereleotris, Nematereleotris, Navigobius, Oxymetopon and Pterocerdale. The latter group is more obscure, with Gunnelichthys perhaps being the only regular fare to grace the aquarium scene. 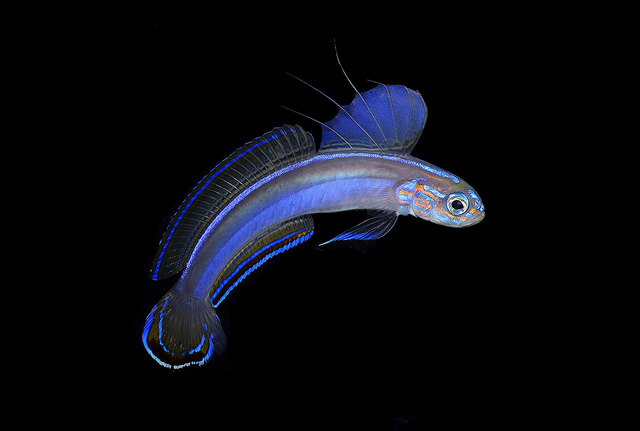 The first of three species highlighted today is Ptereleotris kallista. The specific epithet “kallista” is in reference to the greek for “most beautiful”. This species belongs to the Ptereleotris grammica clade, for which there are four members – all of which are diagnosed by having circular caudal fins, as well as a broad, flag like first dorsal fin in which the rays are extrapolated into long, filamentous extensions. The phylogeny of Ptereleotris has not been formally worked out, but it appears likely that kallista and its group members form a sister group the the Ptereleotris hanae complex – in which the members are diagnosed by having very filamentous caudal fins, as well as a shorter, more underdeveloped first dorsal fin.

Ptereleotris kallista is a fairly recent addition to the genus, being described in 2008 based on two specimens obtained from the aquarium trade. The species is distributed in the Philippines, although how extensively, is currently unknown. Needless to say, this species is very seldom seen, and is currently known only from a handful of live photos, most of which are included here. That being said, its rarity is probably due to its obscurity, and the species slips in occasionally with P. grammica and the very similar P. uroditaenia during Philippines exports.

Ptereleotris kallista is easily diagnosed from P. uroditaenia based on caudal fin patterns. In the former, the fin is mostly translucent, sans a brownish-black outer margin, edged on both sides in metallic blue. The keys for P. uroditaenia will be discussed in the later part of this article. 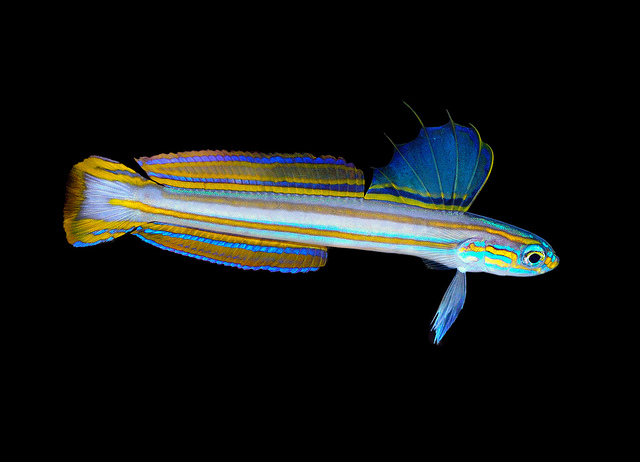 Ptereleotris grammica, whose specific epithet is in reference to the greek word for “lined”. Photo credit: Lemon TYK.

P. grammica is the most ornate of the trio, with the usual body coloration decorated even more so with a series of horizontal yellow stripes. The specific epithet “grammica” is rooted in the greek for “line”, which is very aptly displayed in yellow along all median fins and its body. The dorsal fin is characteristic for this species (and all other species in its clade), being winged and deeply crenulated between the rays. In the correct lighting, Ptereleotris grammica scintillates with a metallic blue glitter along the margins of its stripes and fins; a highly fetching and grandiose compliment to its already stunning beauty.

Unlike the former, this species attains a larger distribution across much of the Western Pacific, from the Ryukyu Archipelago, south to the Philippines, Indonesia, the Bismarck Archipelago and the Great Barrier Reef. P. grammica is replaced by a closely related sister in the Western Indian Ocean, a sister which only attained species status after serving time as an invalid subspecies of P. grammica. 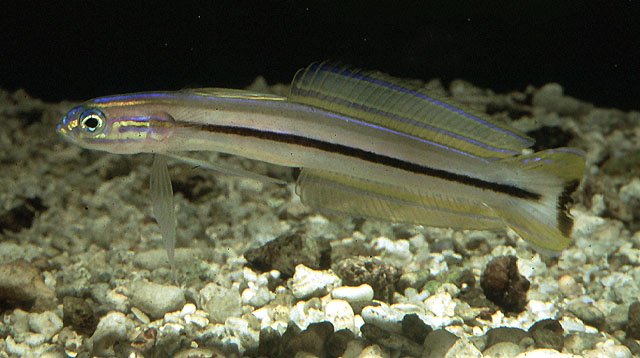 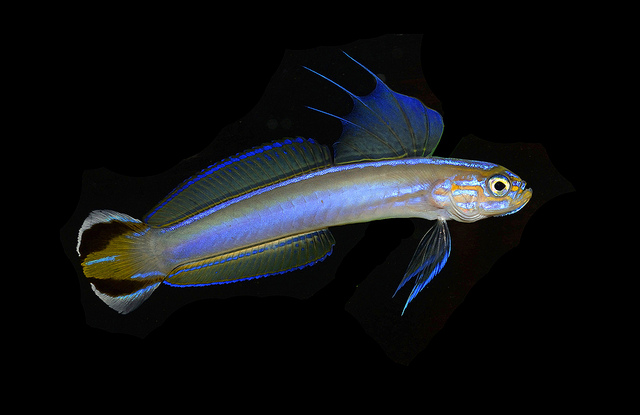 The beautiful P. uroditaenia is the final member of this exciting group. Like P. kallista, the species is greyish basally with a reflective blue glitter which scintillates under indirect lighting. P. uroditaenia is named for the distinctive marking on its caudal fin, and its specific epithet is literally the summation of the words “tail + two + stripes”. The caudal fin is yellow with two oblique black stripes terminating at the central edge of the fin. The outer rim, specifically the axillary portions, are translucent to off white. This caudal fin marking is the primary diagnosis against the similar P. kallista.

Despite their stunning beauty, Ptereleotris are shy and retiring, and will fail to thrive in a bustling community tank. These species are best displayed in a quiet biotope with low human and fish traffic, stocked with similarly well-behaved fish of petite stature and dainty behaviour. In the wild, these fish are specialists of open, sandy bottoms far removed from the typical coral reef. This habitat is often monotonous and barren, with the silty substrate offering perfect conduits for the construction of vertical holes in which they live in. Stonogobiops and Ptereleotris are frequently encountered here, and the latter are often seen taking up residence with the former and its shrimp partner.

For a change in scenery, perhaps a sandy bottom biotope complete with a group of these hovering dart fishes would make for a fascinating conversation starter. While rare, they are not impossible to obtain, and with a little bit of luck and patience, you’ll eventually stumble upon some that you can try your hands at.