This may well be a breaking headline: goldfish braces?? Who even knew such a thing existed. Well they do now, and thanks to the interweb, we get to know all about it. This little goldfish named ‘Mr. Hot Wing’ has been gaining internet notoriety after his recent surgery. Lehigh Valley Veterinary Dermatology in Pennsylvania posted this picture on their Facebook page, and it has gone viral. Mr. Hot Wing, the lucky little goldfish who came from the carnival, received these special custom orthotics. Mr. Hot Wing was born without a lower jaw bone and could not keep his mouth open, making it very hard to breathe or eat. 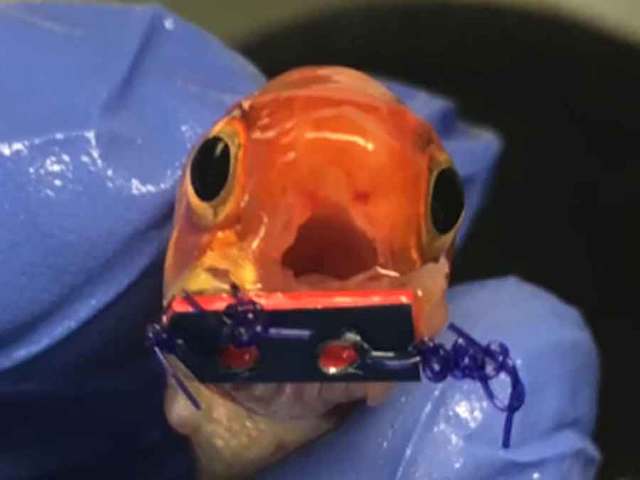 Veterinary dermatologist Brian Palmeiro, known as the ‘fish doctor’, created these braces out of a credit card for $150.00. They were made using a small slice of a credit card and administered through surgery. Although many people believe goldfish don’t have teeth, they do, but the purpose of these braces was not a perfect smile. Rather, the braces act as a weight to keep Mr. Hot Wings mouth open. Not only is this probably the coolest looking goldfish around, these braces effectively saved Mr. Hot Wing’s life, allowing nourishment and life for this little goldfish. MORE