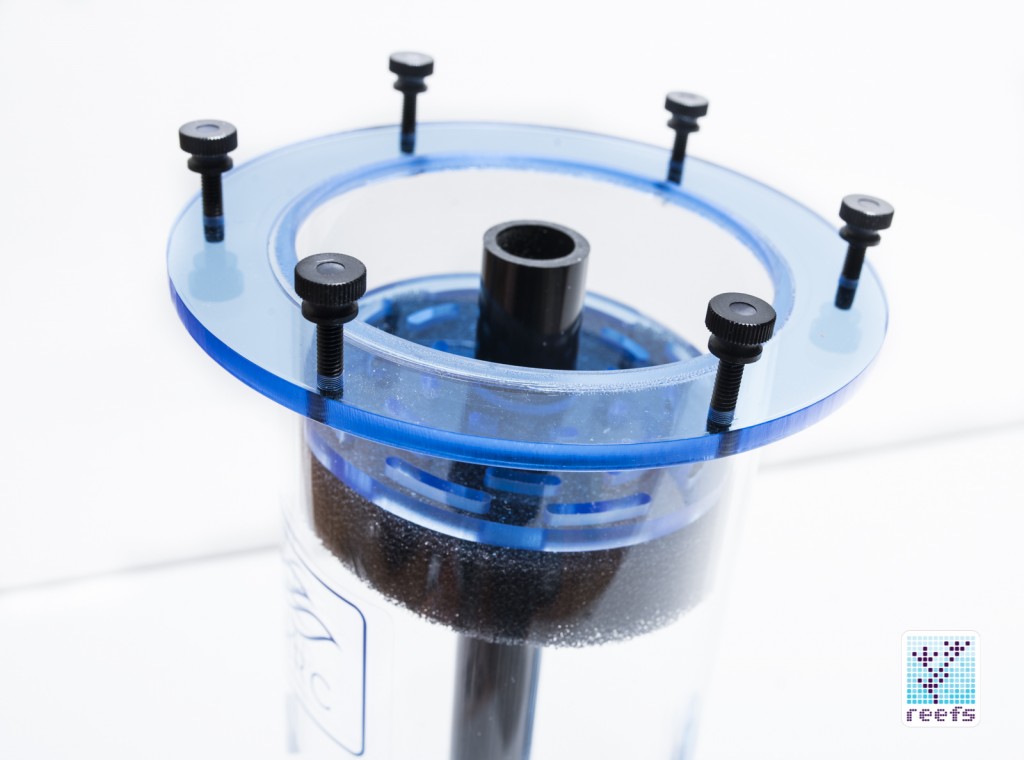 The importance of chemical filtration in a saltwater aquarium is undeniable. Unlike most freshwater tanks, a saltwater setup relies on a handful of chemical compounds that bind to and absorb harmful byproducts of the nitrogen cycle, as well as chemicals and decaying matter introduced by aquarists themselves (through medications, feeding, adding new live rock etc.). There is a wide variety of media available on the market, from the most basic- ”fail proof” activated carbon, to various granular ferric oxide compounds, synthetic polymers, and other chemicals.

But how to effectively distribute flow to maximize contact with chemical media and, in turn, to assure its effectiveness? Different media have different flow requirements, and there have been many advancements in the methods used to disperse flow through the various media. The simplest solution for chemical filtration, placing chemical media contained in a mesh bag in a high-flow area of the tank, suffers from the fact that the flow is distributed unevenly throughout the media bag and can also clog with debris. The solution is a separate chemical media reactor. This device is set up with either its own circulation pump, or as a loop from the main return pump, which keeps it from reducing flow throughout the system and allows for a precise control over the amount of water that “feeds” the media.

The device I am reviewing today is a free-standing media reactor from My Reef Creations (MRC) called x3. The company is débuting a line of reactors; there is the x3, as well as a larger model named x5. Let’s take a closer look and see what MRC has come up with. 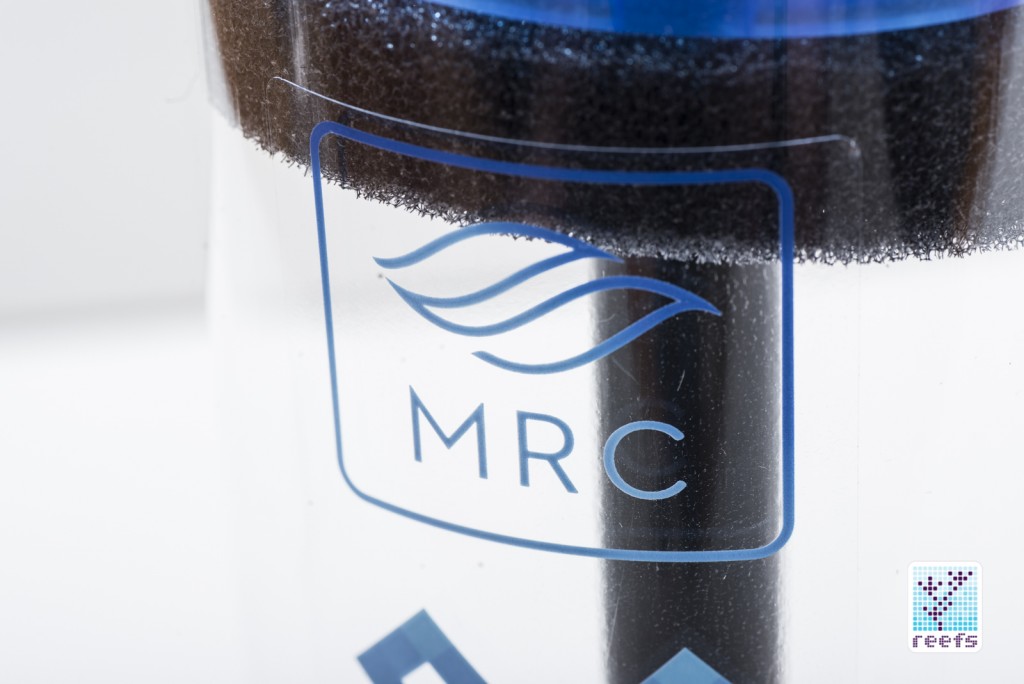 My Reef Creations is well-known and respected in the high-end, custom built aquarium circle, but is largely unknown to the general public. Well, MRC wants to change that by opening their doors to the public, offering quality made products with affordable price tags.

The company designs and manufactures all their equipment on-site in Atlanta, Georgia, using high end materials and computer-controlled CNC machines in their facility. There are a large number of private clients, as well as public aquariums, that have engaged MRC to design and build their filtration systems. The next time you see a gigantic sump or 6-foot-tall skimmer, take a look – there is a good chance MRC built it. However, big aquariums are not the company’s only focus- they are known for custom builds of any size and shape. Back to the review… 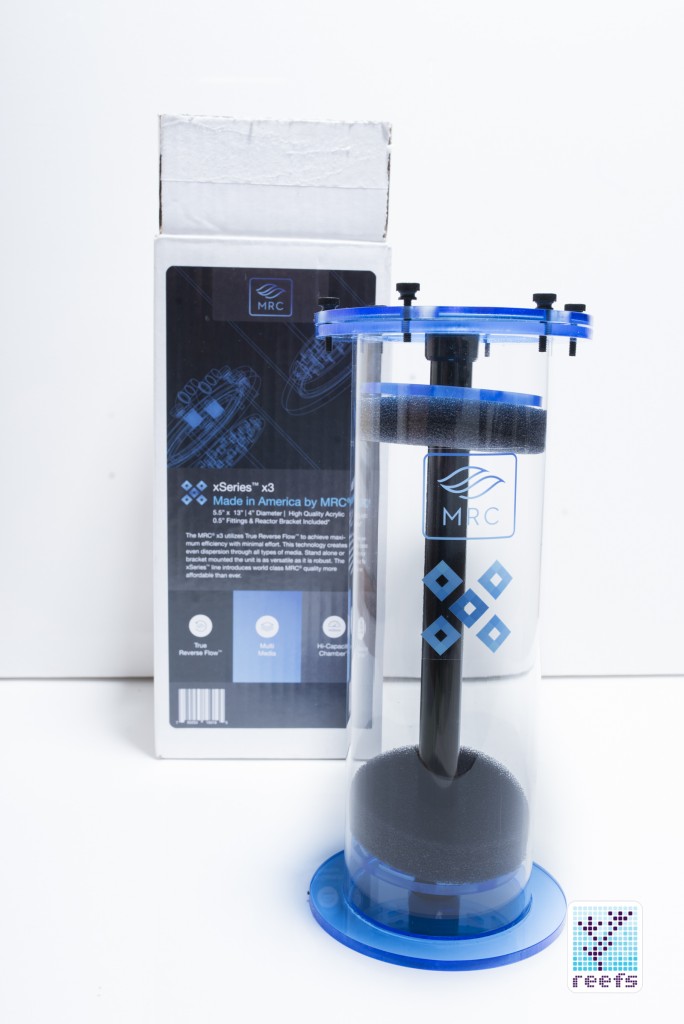 MRC x3 follows a proven design – it is a freestanding, large diameter, transparent tube with both inlet and outlet connectors located on the top. The lid of the reactor is held on by six thumb nylon screws and a rubber O-ring that creates a watertight seal. Inside the x3 is a black tube, through which water enters the reactor and disperses on the bottom, and a set of two acrylic plates and two sponge “donuts” that hold the media in place, preventing it from getting back to the tank. 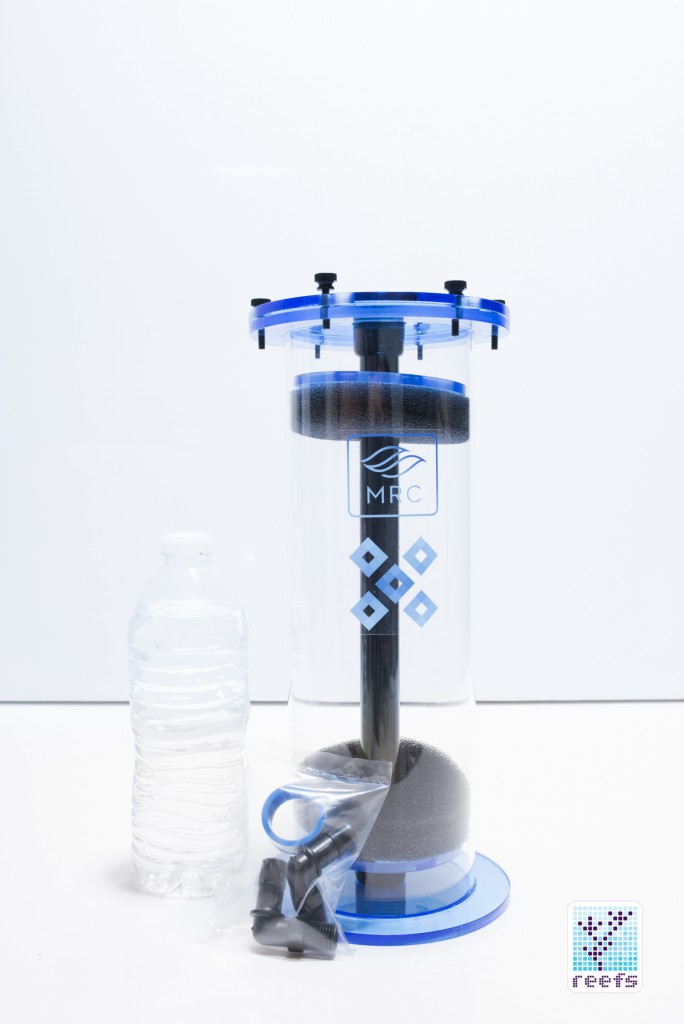 The physical dimensions, holding capability and plumbing parts sizes are as follows:

-an acrylic hanging bracket comes with each reactor 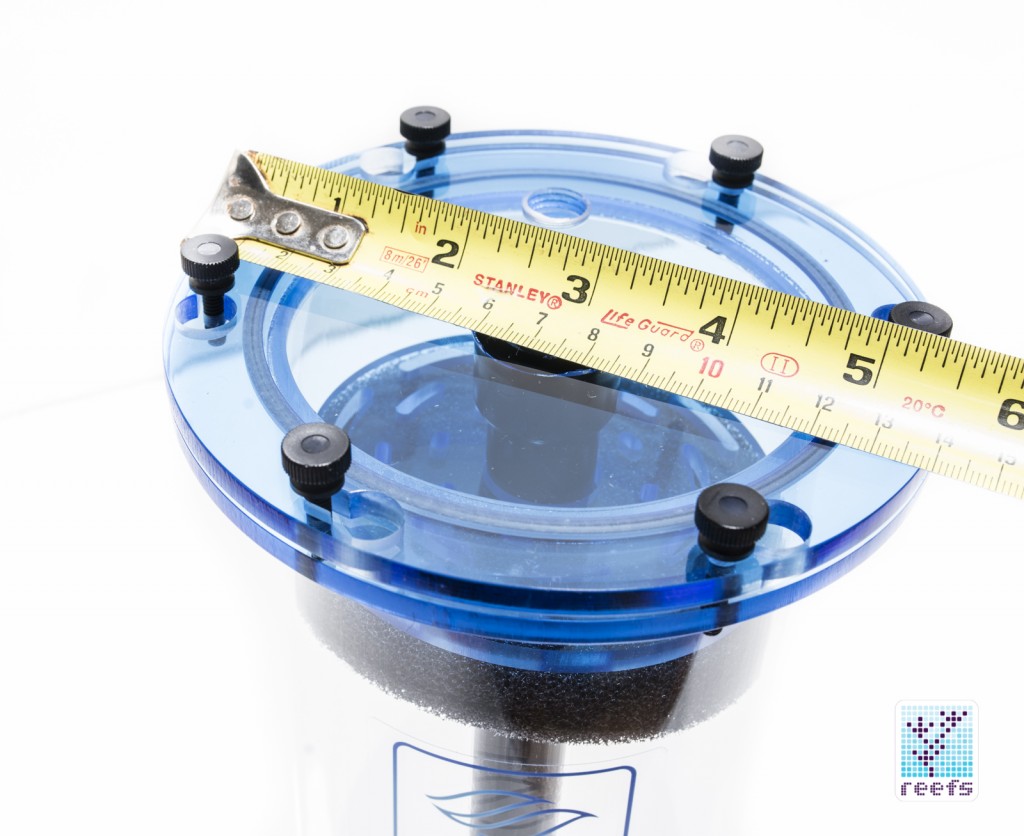 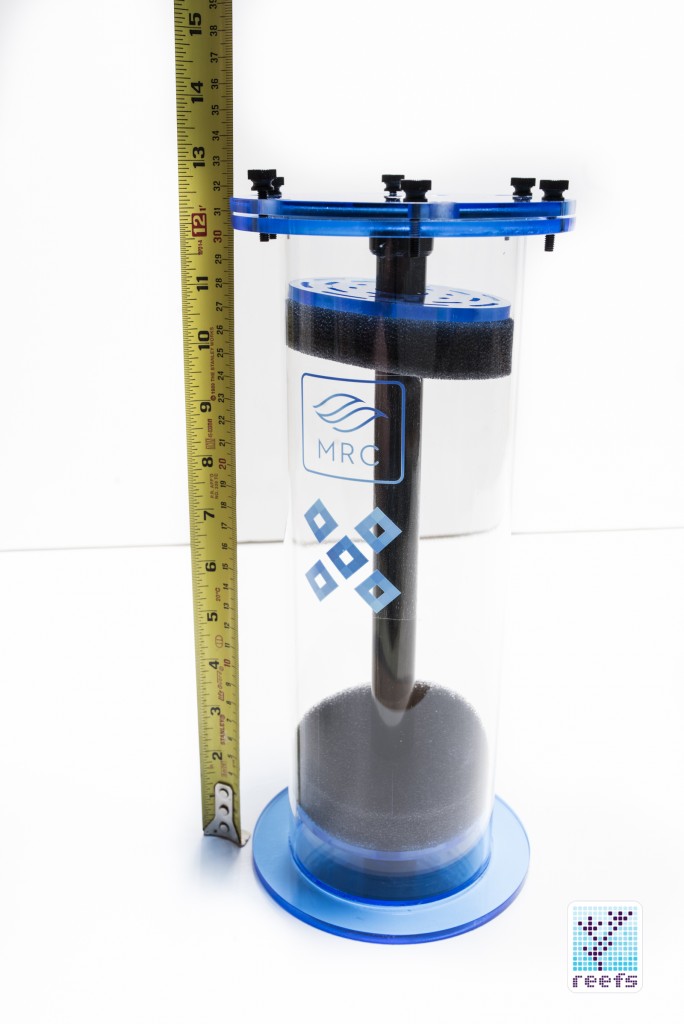 MRC will be selling their reactors in two versions- as a standalone unit that includes everything I mentioned above, as well as a plug & play package called x3 ECO kit, that included 4 feet of vinyl tubing and a recirculating pump. I also want to mention that the larger model, the x5, has the same diameter and footprint as the x3, it is 21″ (53cm) tall, holds 2740 ml of media, and is rated for tanks up to 400 gallon (1500l) in volume 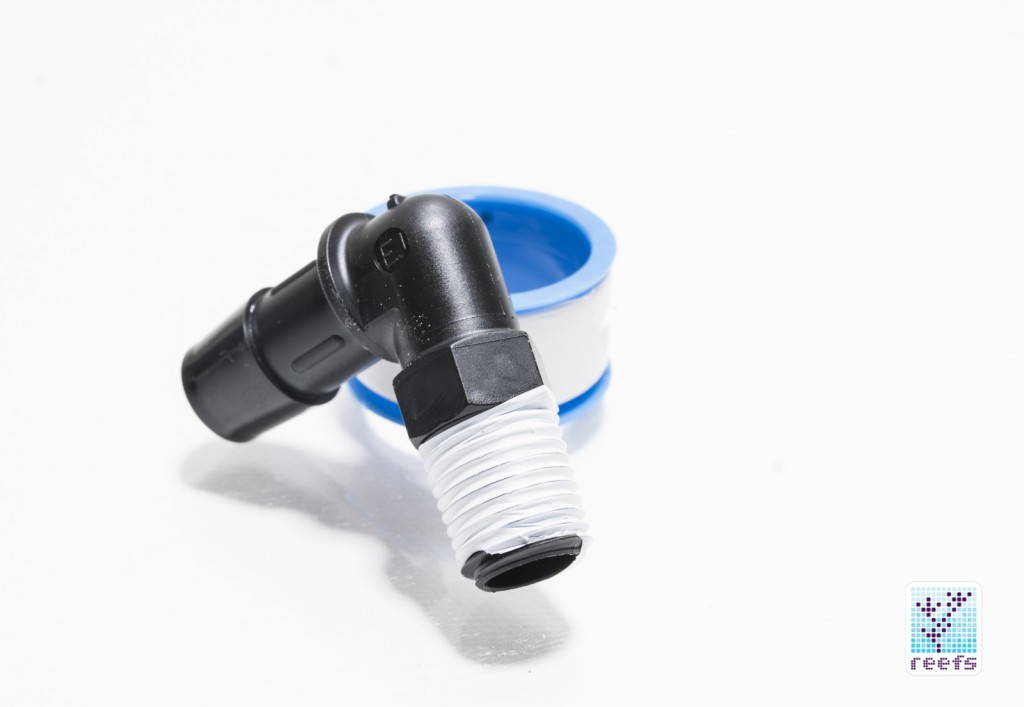 My Reef Creations x3 reactor’s build quality does not disappoint- the acrylic work is superb, impeccably cut and glued. Thumb screws on the lid assembly operate smoothly and match the lid’s keyholes perfectly, creating a watertight seal around the top. 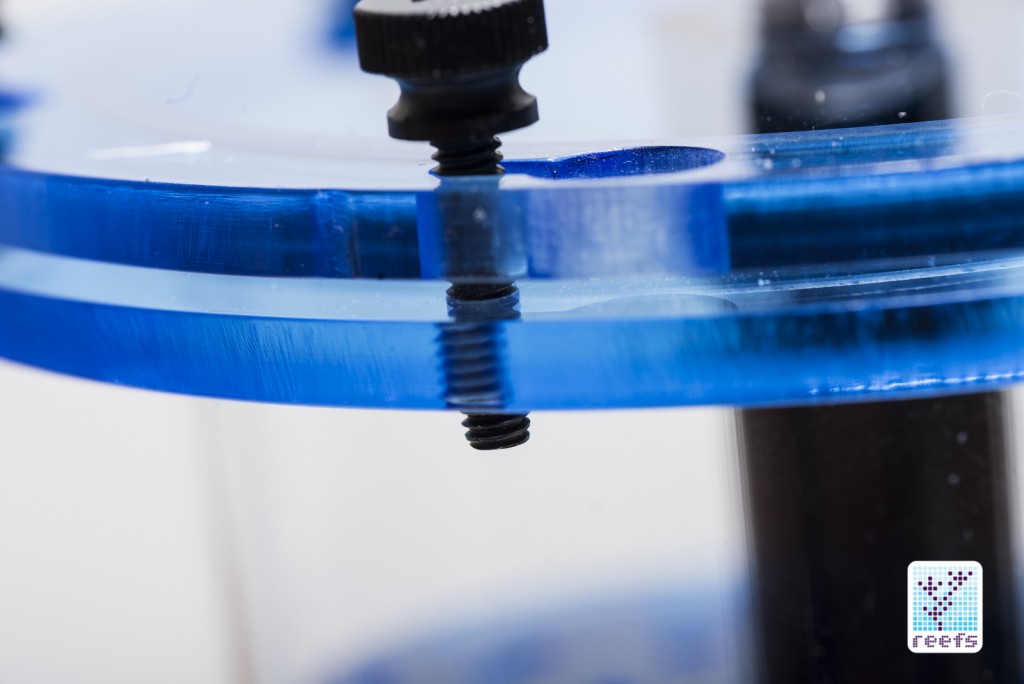 This chamber design is virtually fail proof, much better than the standard threaded lid other reactors have; they tend to leak. The acrylic and filter sponges match the reactor’s inner diameter seamlessly and are easily removed for cleaning. 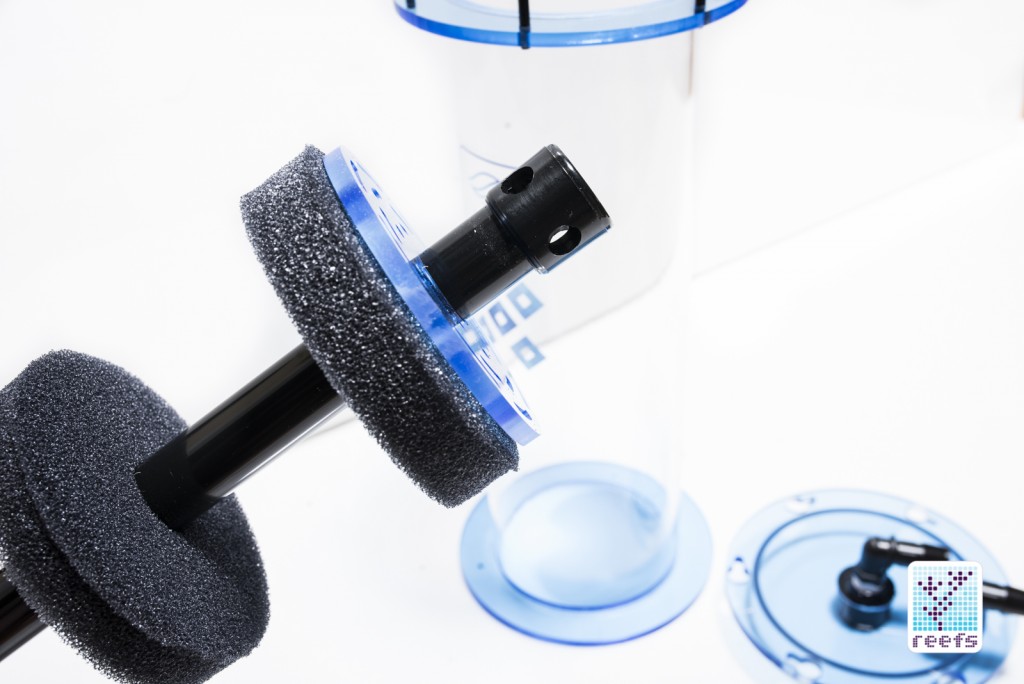 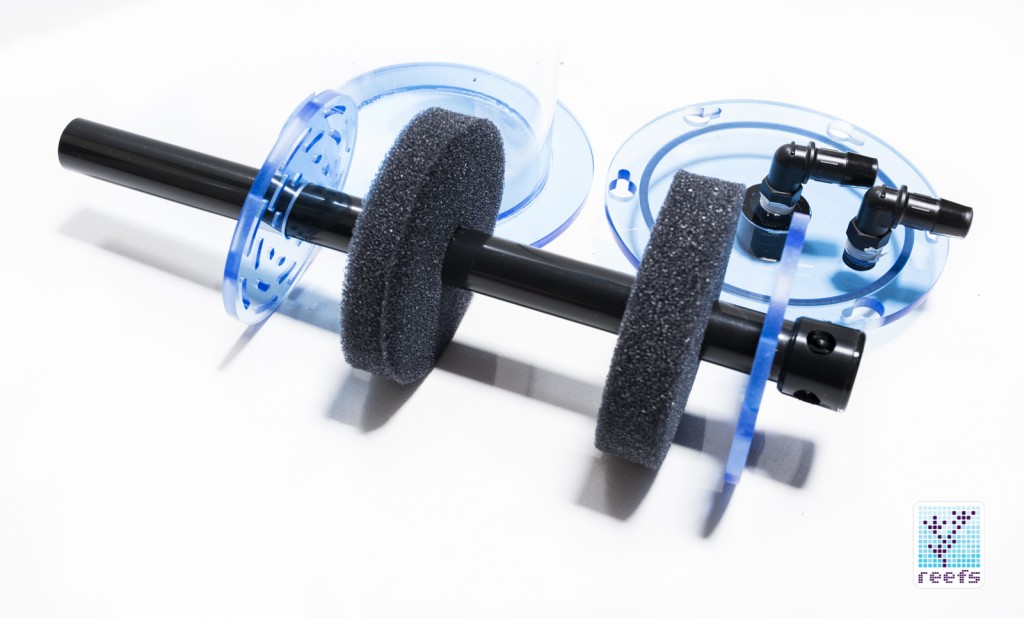 In summary, MRC x3 is a proven design executed extremely well- you can see and feel the build quality MRC is famous for, and there’s nothing to complain about. The only thing I would like to see in the ECO kit is a small, inline swing arm valve to have a little control over the flow. 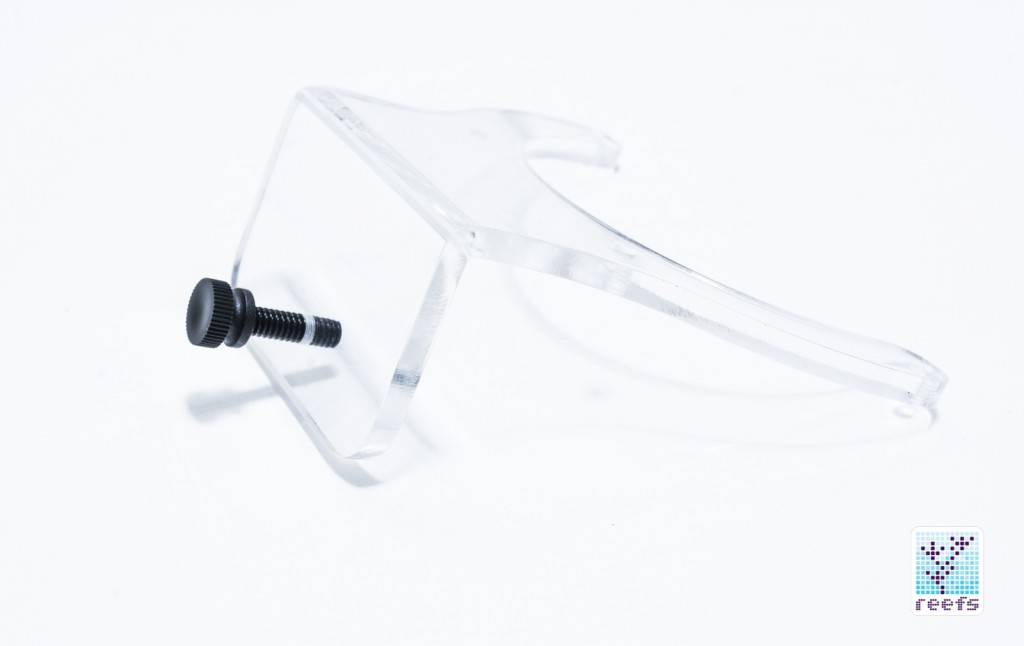 To test the flow dispersion through the reactor chamber, I filled it to ¼ of its volume with large size particles of activated carbon, attached an oversized pump, and observed how the particles moved around. 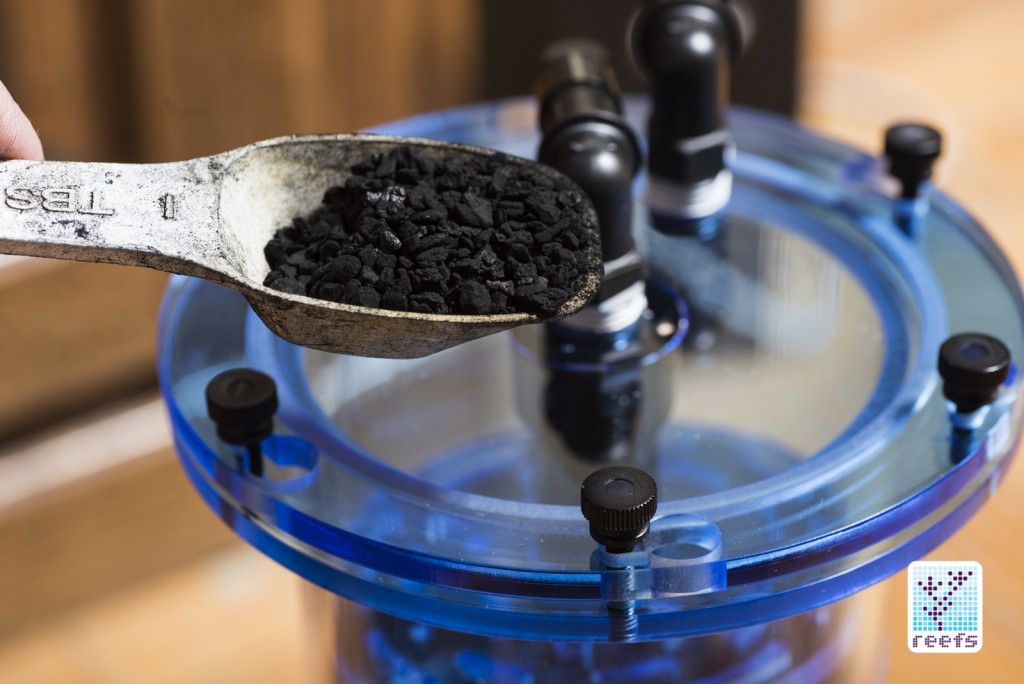 Unsurprisingly, the outlet at the bottom of the inner tube shot water in all directions, dispersing it evenly throughout the media. This is important, because it assures uniform flow through all media particles, a reactor’s most important characteristic. 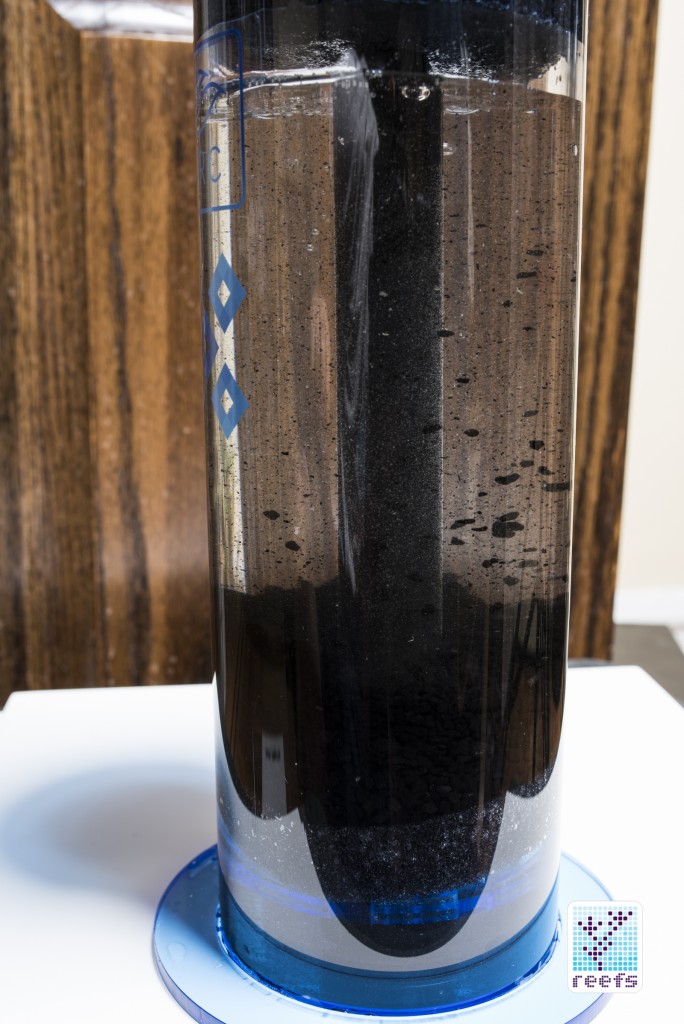 Perhaps the most surprising aspect of MRC reactor is its price. The smaller x3 will retail for $89, which is only slightly more than the lesser quality, screw-on type reactors we see dominating the market in the “under $100” price range. The x3 ECO kit will sell for $114.99 and x5 will cost $129.99 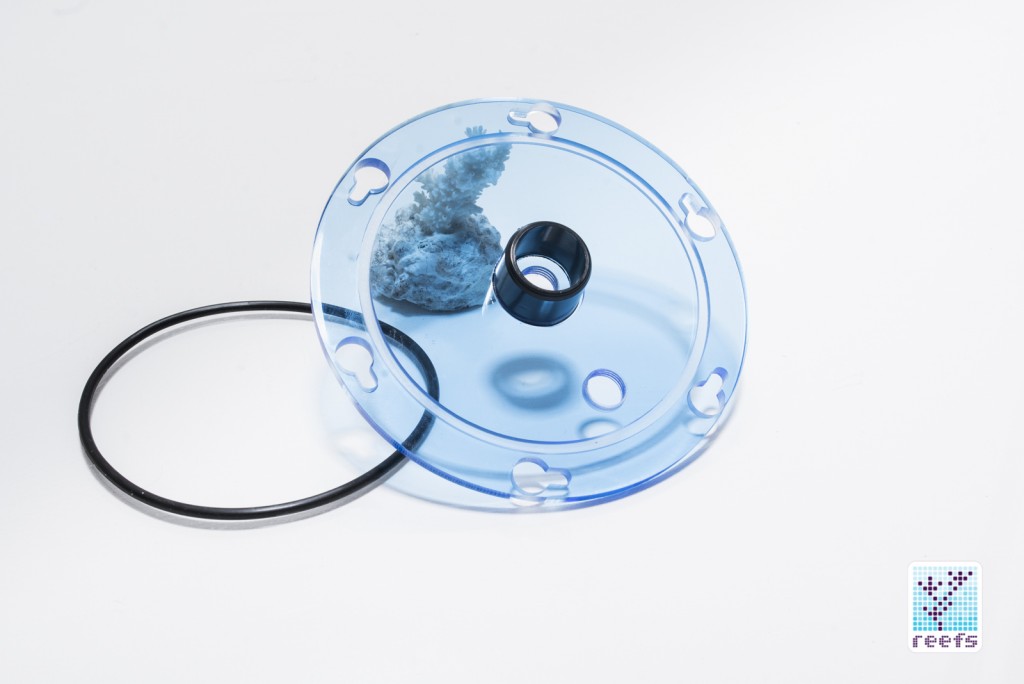 The x3 reactor can be summarized as follows: it is built in United States and conforms to the high standard that the company is known for, it works flawlessly, and it will be offered at a price that makes it a great alternative to the Asian-made reactors you can find in many chain retail stores. It doesn’t surprise with any technological innovations, but shares the same proven design of the much more expensive reactors on the market. It can be placed on the floor or hung on the tank’s rim with an included bracket, and works with various kinds of media. If you are looking for a new media reactor for your saltwater tank, MRC x3 offers an excellent quality/price ratio.

My Reef Creations xSeries of reactors will be available in the second quarter of 2016.

To learn more about the xSeries, visit the MRC website