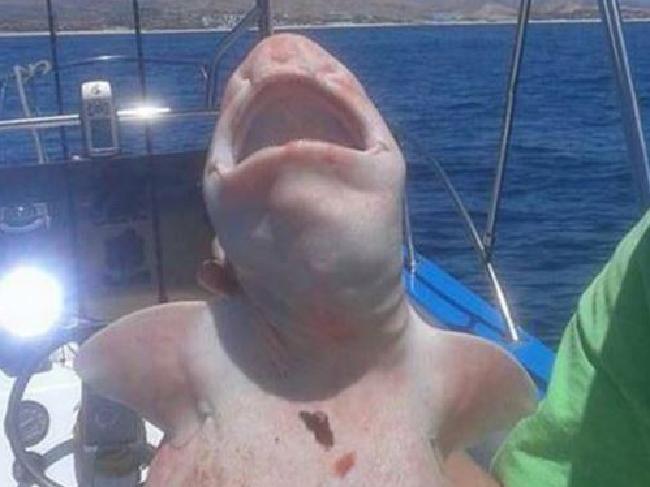 Scott McLaughlin, an 18 year old from Illinois, went on a fishing trip with his dad in the Sea of Cortez and caught quite the rare shark. McLaughlin was on the boat of Jaime Rendon, the Captain of Dr. Pescado. “I asked our guide what it was, and he said he had never seen anything like it in 25 years of doing this,” McLaughlin said. “We kept it out of the water for about 10 minutes before releasing it. The guide was concerned it might be endangered.” The shark was later identified from the photos by David Ebert, program director for the Pacific Shark Research Center of Moss Landing Marine Laboratories, as an albino or leucistic swell shark. Swell sharks are common in the Gulf of Mexico and harmless to humans. This spotted shark usually resides under reef crevices and is not sought after by fisherman based on it’s poor flesh quality. The shark gets its name because when it is threatened, it can swell up to double its normal size. This particular shark was unusual since it was affected by leucism or albinism. Leucism is a condition that is caused by a lack of many different pigments, while albinism is a condition that is caused by the absence of just one pigment, melanin. “There are about 520 species of sharks, and I’ve seen albino or leucistic ones in some of those, but this was the first time seeing an albino or leucistic form of a swell shark,” Ebert said. MORE