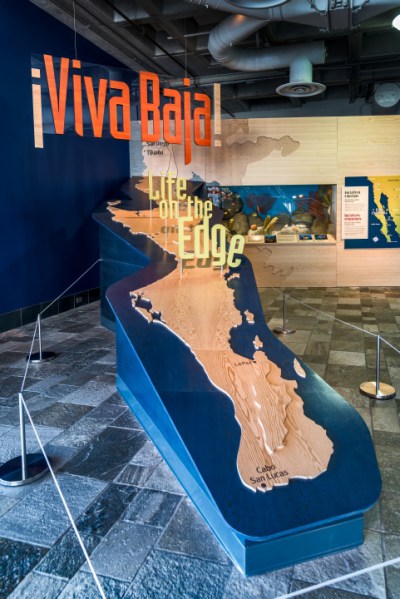 Monterey Bay Aquarium’s newest exhibit explores the wonders of Baja California, a diverse state in northwestern Mexico, with geography ranging from beaches and deserts to forests. The ‘Viva Baja! Life on the Edge’ special exhibition is now open and features creatures from the coastal habitats of Baja, California. This is also the first time the aquarium has also featured animals that live entirely on land in its 32 year history! The tortoises especially seem to be a hit with visitors.“They’ve been crawling all over each other and everything else,” said Paul Clarkson, curator of husbandry operations, who added that the reptiles have been extremely popular with visitors.The exhibit also features many fish and invertebrates too. Some of the featured animals from Baja’s coastal deserts, mangrove forests and coral reefs include: Bluespotted jawfish; Cortez rainbow wrasse; Desert tortoise; Golden Trevally; Lookdown; Mountain kingsnake; Pacific seahorse; Green moray and the Staghorn hermit crab. The exhibition cost 3.8 million dollars and plans to run for at least two years. The exhibition includes three main galleries with 18 live displays, including interactive displays like the ‘rainbow reef’, where visitors get the chance to color a coral reef fish and email a copy to themselves as a keep sake. The first gallery, ‘Near the Edge’ focuses on the Sonoran Desert.  The second gallery, ‘At the Edge’, features the wonders of the Mangrove Forest.  The third and final gallery, ‘Over the Edge’, highlights the areas amazing coral reefs. The exhibit takes visitors through the vast and changing landscapes of Baja. “Baja is a unique and special place,” said Raúl Nava, senior exhibit developer and writer at the aquarium. “It’s an amazing land of contrasts.” MORE