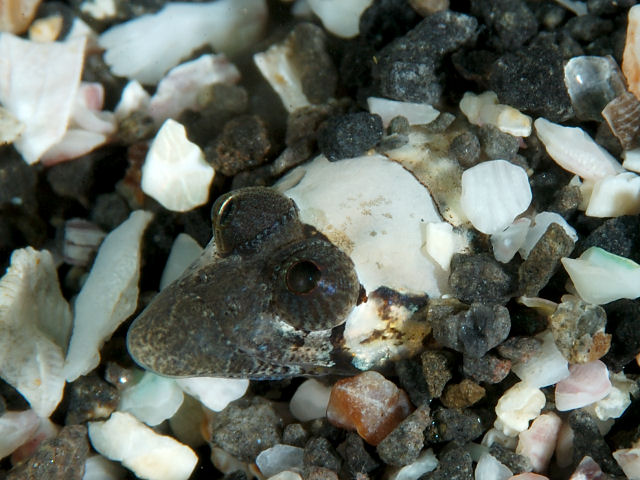 Tropical sand flats are a great place to find strange species of fish not normally encountered in aquarium exports. Fishes from this ecological niche are often highly specialized for living in this relatively featureless and unprotected habitat, showing adaptations to their coloration, morphology and behavior which allow them to blend in unassumingly to their surroundings. Because of this, they don’t necessarily make for the most flamboyant of aquarium subjects, but they can be captivating in their own unique ways. Take, for instance, the peculiar little fishies known as Sandburrowers.

The Family Creediidae is a highly distinctive group of small fishes (all under 8 cm in length) highly adapted for a life beneath sandy substrates. Their bodies are elongated; their heads are pointed for burrowing; their eyes are positions dorsally to maximize their field of vision; their colors are always muted earth tones with camouflaging breaks to their patternation. This look is so homogeneous, in fact, that identification to species is nearly impossible without microscopic examination of their fin and scale counts.

Creediids also show a remarkable similarity to another group of fishes found in this habitat—the Sand-divers (Trichonotus); however, these similarities have recently been shown to be a result of evolutionary convergence. Genetic evidence suggests that the Sand-divers are the likely sister group of the diverse goby lineage, while the Sandburrowers are only distantly related, forming a sister group to another obscure psammophile—the Signalfishes (Hemerocoetidae).

Feeding behavior of the creediid fish Crystallodytes cookei (no audio)

Very little is documented about the life history of creediids. The video above gives an idea of their remarkable feeding strategy, as they lurk just beneath the sand, alertly scanning around with their protruding eyes until the moment prey is spotted, darting out at breakneck speed to snatch it. Their ability to dive beneath the sand in an instant is equally astounding, reminding one of a subterranean Barnacle Blenny (seen in the video below). Clearly, it is dangerous being exposed out in the open on a sand flat, and these little fishes have evolved to minimize this risk as much as possible.

Aquarium specimens are, unfortunately, a rarity (though, judging by the photos included here, they do make the occasional appearance). Obviously, any aquarium housing Sandburrowers should be filled with an inch or two of fine sand (not crushed coral). This will of course make these fishes all but invisible, but much of the appeal in keeping a fish like this is in observing its idiosyncratic behaviors. A small reef tank stocked heavily with creediids and Barnacle Blennies would make for an exciting display come feeding time, right?