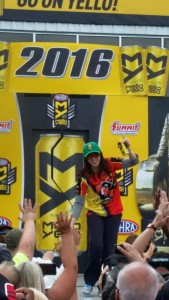 Angelle Sampey, our favorite reef aquarist/motorcycle drag racer, celebrates as No. 1 Qualifier in Atlanta this past week

Schedules made us late this week but we showed up nonetheless. Topics this week include the passing of Farside Tropical’s Jesus Larralde; our motorcycle drag-racing friend Angelle Sampey; the Poland, OH, school tank; Emily McPherson’s reef plans; and reef-aquarist hobbies. Download the podcast here, or subscribe to our podcasts at iTunes. Also, follow us on Twitter at reefthreads.—Gary and Christine