“WEATHER – a Coral Nightmare”- is a very special project to us. As this year will be one of the hardest years for coral reefs around the globe, due to climate Change, Global Warming and all the other environmental issues. We want to capture it in all its beauty before it is too late. Of course we hope and do our best to preserve this magnificent ecosystem. So we team up with different organisations, such as secore.org or waittinstitute.org and help them out with creative media content (Film, Animations,…).

2014 we fell in love with “fluo-diving” on Koh Tao in Thailand and ever since it is like a drug to us. As soon as the sun sets we just want to get in the water with blue lights and watch this magnificent fluorescent world. In January 2016 on Curaçao (we now call it #Fluraçao) we lit up #SnakeBay as if a police car got sunken in it, thanks to the two fantastic #Keldan Lights with the Blue Modules. Special thanks to Keldanlights.com for handing us these fabulous lights for this trip; I have never seen such bright blue lights before.

We shot the film in several night dives in Curaçao/Snake Bay with 2 Keldan Video 8M FLUX and 2 Blue Modules and the Panasonic GH4. Everything was filmed in 4K and downscaled to HD for creative/editing reasons. We used a macro 45mm (no diopter) and a 12-35mm lens with yellow filters (to filter the blue light from the image) and bring the real coral/animal fluorescence to life. The difficulty was the reef nightlife – Plankton! It was insane on every dive! So in between the shots we had to turn down or switch off the lights and still it was everywhere. But once on a “fluo/UV dive”, you just can’t stop until your air runs out…

In January the coral reefs of Curaçao didn’t look like they were suffering too much from climate change (YET!) and we hope they will survive this “storm” and remain beautiful, until we visit them again.
A very special thanks goes to ThinkFishTank.com for letting us use this epic music track and of course to sun-reef.com, we will never forget the Flintstone Villa! And a warm thanks for making us feel at home to Evita and Chief from OceanSunsetApartments.com.

And of course merci to my best buddy and partner in the world Lena. 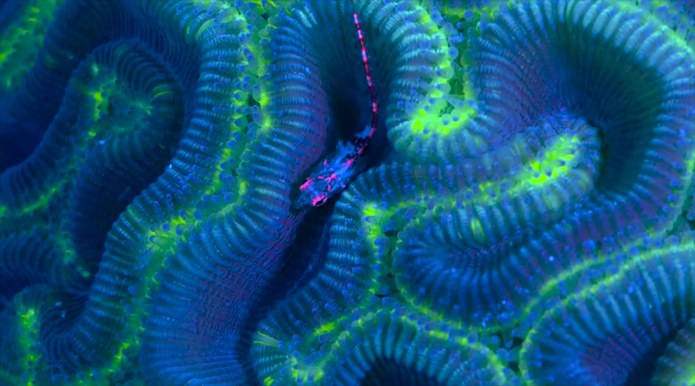