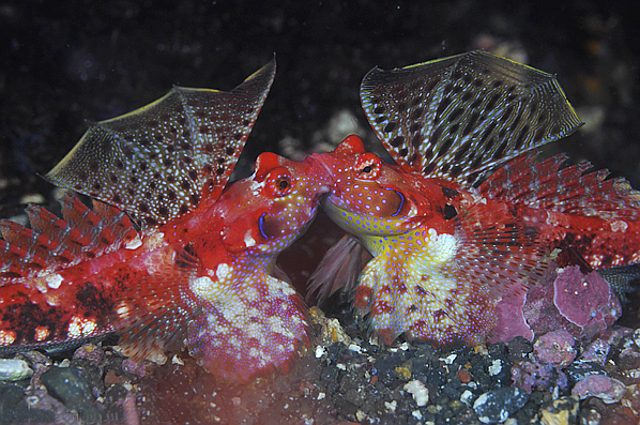 Despite their considerable popularity amongst aquarists, the Scooter Dragonets remain some of the most frequently misidentified and misunderstood of marine fishes. Even the group’s common name in the aquarium trade—“Scooter Blennies”—is a misnomer, as these fishes are most assuredly not blennies (though, to be fair, it was only recently that the scientific community settled on precisely who these confounding creatures are actually related to—seahorses and pipefishes). The confusion even extends into how these fishes should be classified at the genus level, as two competing views on the matter have existed for the last thirty years. In total, this is a group in serious need of review… 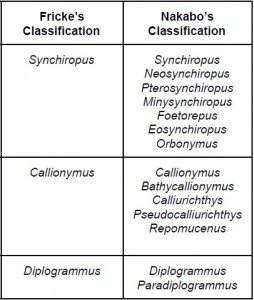 The Family Callionymidae (generally referred to as “dragonets”) is comprised of just under 200 species and, depending on which system of classification you prefer, either 13 or 20 genera. The two main authorities on the group, Fricke and Nakabo, both reviewed the family in the early 1980’s and, relying exclusively on morphological traits, each arrived at a different opinion on how to best classify the group’s biodiversity. Fricke took the classic “lumper” approach, choosing to arrange most species as a pair of immense genera—Callionymus and Synchiropus. On the other hand, Nakabo, who examined the group’s skeletal structure in considerable detail, arrived at a very different conclusion and split these two genera into several smaller groups. 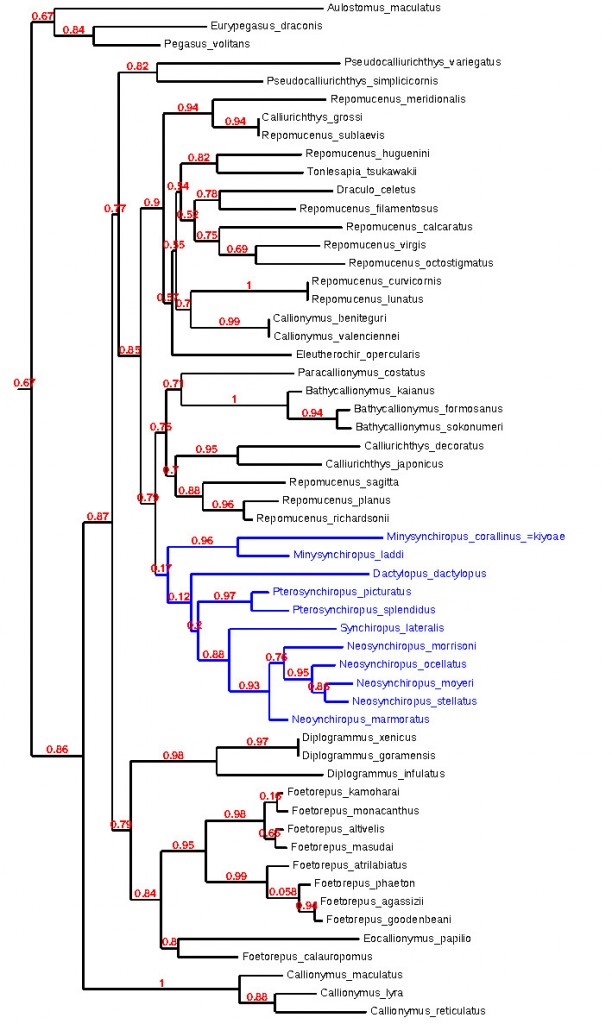 Phylogenetic tree of Callionymidae from mitochondrial CO1. The clade highlighted in blue includes the Scooter Dragonets and other related ex-Synchiropus. Click to enlarge.

This is relevant to our discussion of scooter dragonets, as they may be seen classified as either Synchiropus or Neosynchiropus. Without any consensus on the matter, either name can be considered correct, though the former is more common amongst American and European authorities, while the latter is common to Japanese sources. Genetic data would of course go a long way towards helping to resolve this uncertainty, but, alas, there has been virtually nothing on the subject published thus far. The phylogenetic tree shown above is something I put together from available mitochondrial CO1 data and represents the most comprehensive study to date. The most important detail to note is the strong support for the classification used by Nakabo, as both “Synchiropus” and “Callionymus” are shown to be artificial assemblages of several distantly related lineages. When we talk about “Scooter Dragonets”, we need to be careful about what we are specifically referring to. For starters, most callionymids are quite different from the coral reef-associated species available to aquarists. These unfamiliar beasts are typically to be found in sandy and silty habitats along continental shelves and usually appear flattened and camouflaged with rather drab coloration. 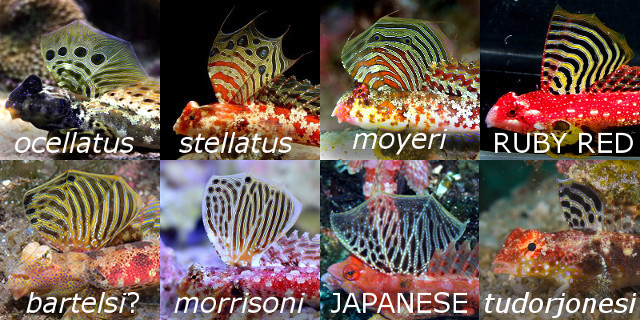 For the sake of this discussion, I’ve chosen to limit the definition of “Scooter Dragonet” to include only those species which Nakabo recognized as belonging to Synchiropus and Neosynchiropus, but, as these form a single, well-supported clade in the above phylogeny, it seems most sensible to treat them as belonging to a single genus—Synchiropus. This distinction is important, as it excludes the familiar Mandarinfishes (Pterosynchiropus), a group closely associated with coral-rich habitats, and another more obscure group, Minysynchiropus. Both were traditionally treated as part of Fricke’s conception of “Synchiropus” (which also includes the very distantly related Foetorepus). Now, with the taxonomic minutia out of the way, we can at last attempt to identify these fishes.

The lateralis Group is comprised of five uncommonly encountered species spread throughout the Indo-Pacific, identified by the presence of a dorsal commissure above the caudal peduncle linking each side of the lateral line. Of these five, only the Japanese S. ijimai has been photographed to any extent, though it is seemingly unavailable in the aquarium trade. The others—S. marmoratus (Africa), S. sechellensis (Red Sea, Seychelles), S. lineolatus (Maldives, Andaman Sea), S. lateralis (Southeast Asia)—are poorly documented and likewise unavailable to aquarists.

The ocellatus Group includes all of the remaining species in this lineage and all of the fishes commonly considered to be “Scooter Dragonets”. The Ocellated Dragonet (S. ocellatus) occurs throughout the West Pacific and is unique within this group for occurring in unusually shallow and primarily rocky habitats, whereas related species occur in deeper habitats dominated by sand or algae. Since this species can be plucked from ankle deep water, it is also the most commonly offered species in the trade and is even available captive-bred from ORA. Unfortunately, the colors of this fish are quite drab, bearing a haphazard mix of brown and dingy white. As with others in the genus, the male’s first dorsal fin is diagnostic; in this instance, there are 4-5 spots (or “ocelli”) and a distinctive array of lines and stripes which serve to separate it from related taxa.

The next most commonly encountered aquarium species are the Starry Dragonet (S. stellatus) and Moyer’s Dragonet (S. moyeri), which can be found in the Indian Ocean and Pacific Ocean, respectively, and represent an obvious geminate species pair. Both occur in sand-rubble habitats near to coral reefs and are most abundant at depths ranging from 5-30 meters, below which they are replaced by other species in this group. Fully mature males share a distinctive shape to their dorsal fin, specifically the elongated filamentous tips to the fin spines.

The Scooter Blenny is also known as Scooter Dragonet or Ocellated Dragonet. It has a mottled brown and white body with red highlights. The male usually has brighter colors and a larger first dorsal fin. A 30 gallon or larger reef aquarium that has live sand substrate, docile inhabitants, and lots of live rock makes the ideal aquarium for the Scooter Blenny.

Aside from biogeography, the two can be told apart by the number of ocelli in the dorsal fin of large males: 2 in S. moyeri and 3-5 in S. stellatus. Certain specimens from the Western Indian Ocean occasionally develop a more solid red patterning along the sides and distinct saddles along the back, but, as the normal phenotype appears to coӧccur alongside these individuals, it remains unclear if more than one species is involved here. Aquarium specimens of S. stellatus are occasionally seen misidentified as S. marmoratus, which is a very different beast with a very different looking dorsal fin indeed. Also of note is that S. moyeri ranges throughout the Pacific Plate, with specimens reported from the Marshall Islands, the Marquesas and Pitcairn (most sources have these latter two misidentified as belonging to S. ocellatus). 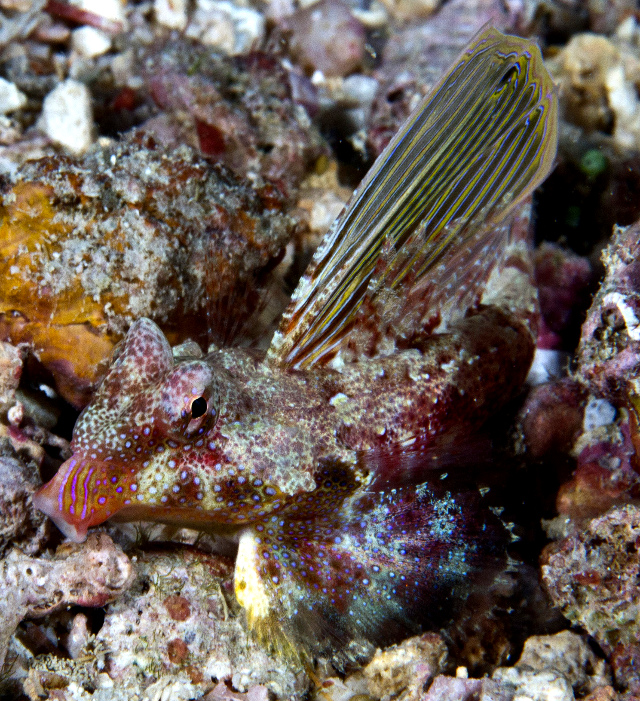 Occurring at a similar depth (10-30 meters) but in habitats associated with greater algal growth is Morrison’s Dragonet (S. morrisoni). This fish is rather blotchy and variable in coloration, appearing in shades of red, tan and white, with a constellations of white spots and another pattern of fine blue spots on the head and pectoral fins. The dorsal fin is distinctive in its shape and patterning, being tall and lacking filamentous tips and with a series of vertical stripes; however, there appears to be some amount of regional variation in the pattern of these stripes that suggests more than one species is involved here.

Relevant to this discussion is another species which has been recognized in the literature despite an apparent paucity of documented examples—Bartel’s Dragonet (S. bartelsi). When it was described in 1981, it was known from a single small male (32mm) and seven equally small females, most originating from shallow depths (0-18 meters). While noted to be similar to S. morrisoni, it was said to differ in having a lower height to its dorsal fin and unbranched rays in the anal fin. Reported locations for this fish include Sulawesi, the Philippines and Papua New Guinea, which could suggest a distribution limited to the Coral Triangle in shallow waters.

Unfortunately, it’s not entirely clear if S. bartelsi is a legitimate species as currently defined. Specimens matching its description are rarely photographed—Allen & Erdmann’s monumental treatise on the fishes from this region notably lacks images of this fish—and those few that exist appear to phenotypically blend traits with those identified as S. morrisoni in the West Pacific. There are, however, apparent differences with specimens originating from the West Pacific versus those known from the Central Pacific. For instance, those from the Marshall Islands (the type locality of S. morrisoni), as well as Fiji, Samoa and perhaps Australia, possess strictly vertical stripes in the dorsal fin, while those from the West Pacific have the first membrane filled with irregular spots with a more horizontal arrangement, followed by stripes that bend anteiorly in the following two membranes. 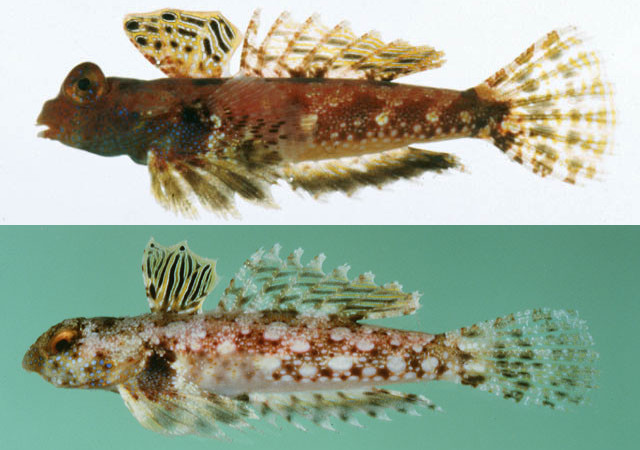 The most recently discovered Scooter Dragonets are a pair of deeper-water species known from the West Pacific. The Redback Dragonet (S. tudorjonesi), described in 2012, is a distinctive fish that bears some similarity to the preceding species but can be diagnosed by the broken, arched stripes in the male dorsal fin, as well as the usual presence of a thick, dark band along the sides of the fish. Specimens were originally known only from Cenderawasih Bay in New Guinea at 50-120 meters but have have since been found elsewhere (Japan, Philippines, Bali, Maldives) and in water as shallow as 20 meters. Aquarium specimens are seldom encountered and are typically misidentified as related species.

The Ruby Red Dragonet (S. sp.) is the newest member of the group, and one which has yet to be formally described (though that is currently in progress). Aquarium specimens have become a steady occurrence out of the Philippines, presumably originating from deep waters, but, aside from a single male collected at 63 meters in Okinawa, there is no further information concerning where this fish occurs. In all likelihood, this is a widespread species in the deeper waters of the Coral Triangle. It can be told apart from the similar S. tudorjonesi by: 1) a yellower belly 2) yellow pectoral fins with a dark medial band 3) the taller, striped dorsal fin.

A similar fish, likely representing another undescribed species, has been collected for the aquarium trade from Moorea, French Polynesia. The single known specimen was collected by Rufus Kimura and made its way to Blue Harbor in Japan. As seen in the video above, it appears to be a female, and can be recognized as phenotypically distinct based on the color of the body and pectoral fins. 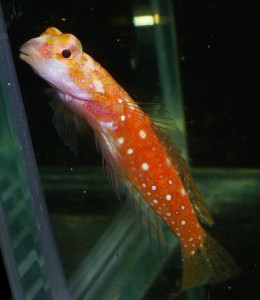 Two other species warrant brief mention. The Tiny Hawaiian Dragonet (S. rubrovinctus) is, appropriately enough, a diminutive species known only from Hawaii, at depths ranging from 1-80 meters. Recently, it has been bred in captivity by Frank Baensch, who reports it’s maximum size at 5cm. The male’s dorsal fin is distinctive in the genus for its elevated anterior spine, which is unlike anything we’ve seen thus far and suggests a distant evolutionary relationship. While it doesn’t seem to have ever been exported for the aquarium trade before, this little fish has great potential as a colorful captive-bred dragonet for small reef tanks.

S. rubrovinctus has also been reported as occurring in Japan and Korea, but it has since been discovered that this is a very different and undescribed species. The confusion stems from the first specimens examined, which were female and did in fact strongly resemble S. rubrovinctus in possessing a similarly shaped dorsal fin and a red-banded caudal fin. Males, on the other hand, are drastically different in having a large, sail-like dorsal fin, indicating this species is a likely relative of the lateralis Group. Again, aquarium specimens seem unknown, but this flamboyant species would make for a stunning aquarium species were it to ever be collected (and hopefully captive bred).