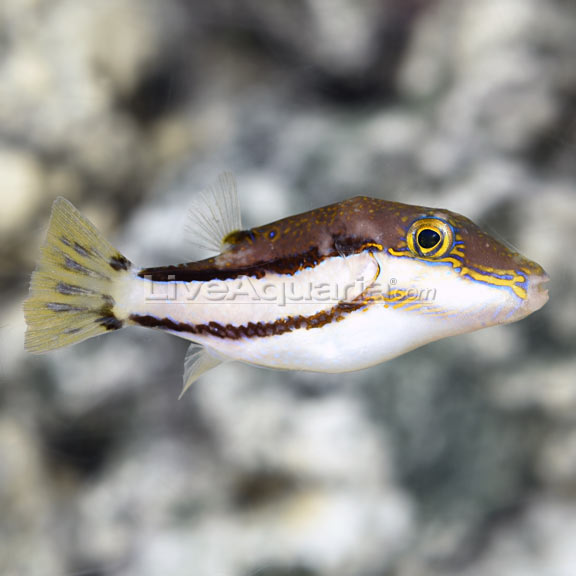 The Toby Pufferfishes of the genus Canthigaster don’t get nearly enough appreciation from aquarists. The three-dozen species in this group offer a little bit of everything, occurring in nearly every sort of tropical marine habitat, from seagrass beds to surge zones, and reef flats to steep, oceanic slopes. And it’s in this latter niche where we find some of the most poorly known members of the genus, few of which are collected for the aquarium trade. Recently, one of these deepwater denizens—the Goldface Toby Canthigaster jamestyleri—briefly appeared on LiveAquaria’s Diver’s Den, selling immediately. 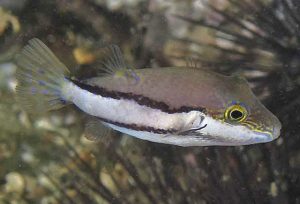 This poorly known species was only scientifically recognized in 2002, having previously been confused with another similar fish found in shallower waters, the Sharpnose Toby C. rostrata. The differences between these two are fairly subtle: C. jamestyleri mostly lacks the dark margins of the caudal fin and has more prominent striping along the body. However, the coloration appears to vary quite widely within this species and likely relates to the fish’s size and sex. Mature specimens (presumably just the males of this dioecious fish) develop a striking pattern of orange and blue on the head, while younger specimens appear to be mostly white.

A similar phenomenon has been observed with its Indo-Pacific siblings, a group that has been mired in taxonomic uncertainty for decades. In the Pacific Ocean, a pair of populations exhibit an apparent antiequatorial distribution, with C. rivulata known from Japan and Hawaii and C. flavoreticulata known in the South Pacific. This southern fish has been widely confused with its northern counterpart due to the similarities of their females, but the more colorful males exhibit subtle phenotypic differences that hints at these being discrete taxa. In the Indian Ocean we find C. punctata, another distinctive fish that has long been confused with C. rivulata on account of their similar females. [This will be covered in more detail in my forthcoming review of the genus.] 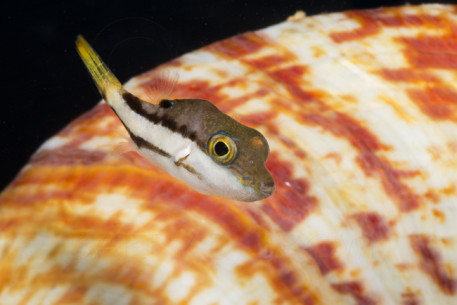 C. jamestyleri has been encountered along the Gulf Coast, from Texas to as far north as the Carolinas. It’s also been spotted by the CuraSub in Curaçao, indicating that this species is likely found all over the Western Atlantic. Somewhat surprisingly, it has yet to be found in Brazil or the Central Atlantic (though it likely occurs here), but there is a record of a trawled specimen from Angola which is likely an undescribed sister species. Aquarium specimens are sporadically collected out of the Florida Keys by Dynasty Marine, being found on deeper dives (~100 feet) that target the Spotfin Hogfish Bodianus pulchellus. However, this marks the uppermost bounds of this pufferfish’s known depth range (25-100 meters), and it becomes increasingly more abundant further down. 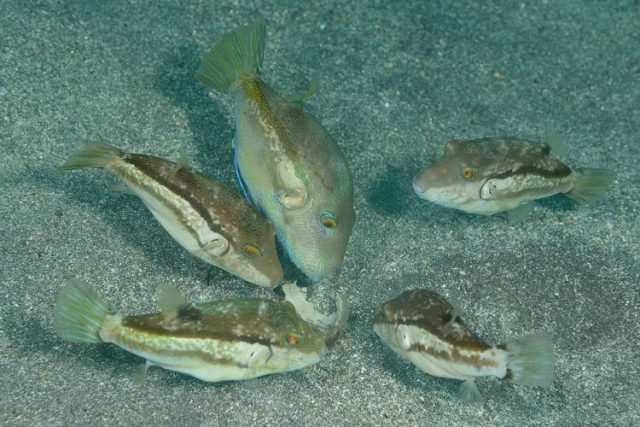 Sexual dimorphism can be extreme in this species group, as seen with these C. rivulata from Japan. Credit: onsenmaru

It bears mention that this species is more at home in rocky reef habitats with sparse coral cover than the lush coral paradise of the average reef aquarium. While this benthic omnivore might be out of place in your coral garden, it’s a perfect candidate for a mesophotic Caribbean themed fish-only tank, perhaps alongside Lipogramma klayi, Baldwinella vivanus, Liopropoma carmabi and a Prognathodes guyanensis or two. For a fish as uncommon as this one is, it’s surprising just how inexpensively it can be had for, which goes to show just how little love aquarists have for these delightful little pufferfishes.