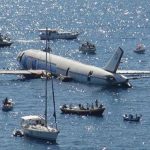 If you have ever been diving or snorkeling on a shipwreck or artificial reef, sometimes the artificial structure can be just as interesting as the reef life itself. Personally, I have been amazed by sunken war ships, underwater sculptures, old pier pilings and even sunken cars. So when I heard that Turkey was sinking an Airbus A300, I was immediately interested. Two of my favorite things are coral reefs and airplanes. The Airbus A300 was the worlds first twin engine, wide bodied aircraft when it entered service in 1972, with 561 built. According to Turkish officials, the 37 year old, 177 foot long airplane was purchased for over $93,000. On June 4, the airbus was taken out to sea and sunk near the town of Kuşadasi. In its heyday the Airbus A300 was a graceful, queen of the sky and an aircraft that I have flown on many times over the years. Turkey hopes that this exciting new dive spot will bring in much needed tourism, which has declined in recent years. Besides just bringing avid divers, artificial reefs quickly become a much needed habitat for fish and invertebrates. Diving inside the fuselage of an aircraft which once carried over 250 passengers will be a unique dive experience that I can’t wait to cross off my bucket list. MORE